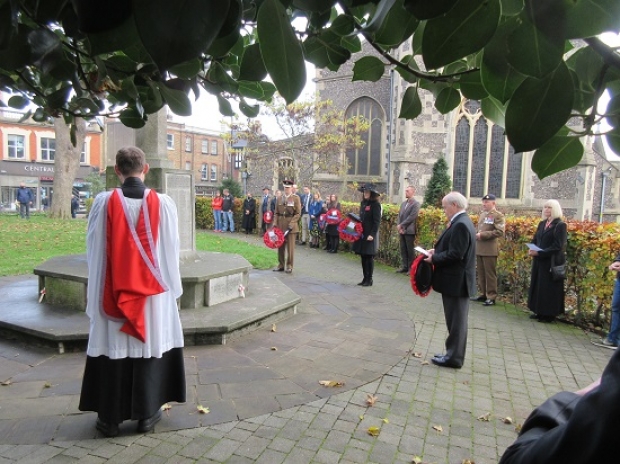 A socially distanced two-minute silence was observed at the war memorial at Barnet parish church to mark Remembrance Sunday.

Leading the Act of Remembrance in what he said were the extraordinary times of a second lockdown was a visiting priest from the St Albans Diocese, the Reverend Canon Dr Tim Bull.
Veterans and other past and present members of the armed forces, their families and members of the public were asked to stand in groups of two and keep two metres apart.

Access to the Parish Church of St John the Baptist was barred under lockdown regulations and Dr Bull conducted a short service in front of the war memorial ahead and after the two-minute silence.
Five wreaths were laid, the first by the representative deputy lieutenant for the London Borough of Barnet, Martin Russell followed the Mayor of Barnet’s representative, High Barnet councillor David Longstaff, wearing his ex-mayor’s badge.
Major Richard Farrar, officer commanding 240 Royal Logistic Corps which is based in St Albans Road, laid the wreath on behalf of the armed services.
He was followed by the Chipping Barnet MP, Theresa Villiers, and church warden Jacob Kurian. 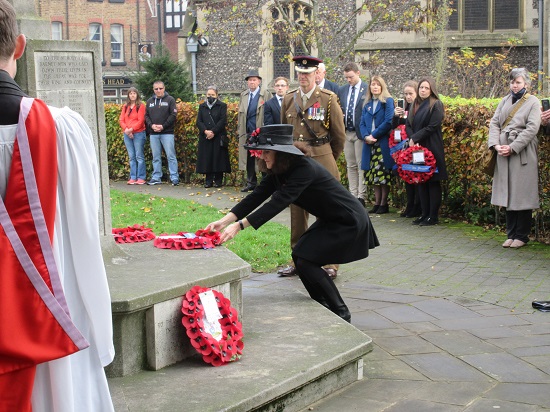 After the wreath laying, Ms Villiers told the Barnet Society that the service at the war memorial had been an important moment to mark the Act of Remembrance despite the need for social distancing.
As one of the MPs who had voted in support of the second lockdown, she nevertheless considered it was vital that places of worship were re-opened as soon as possible after the second lockdown regulations cease on Wednesday 2 December.
“I do find this second lockdown incredibly frustrating, especially the renewed closure of churches and other places of worship, but the projections for the increased spread of Covid-19 infections were frightening and we had to take action as a government to ensure the NHS can cope.”

Three police officers observed the service, but Councillor Longstaff said those attending were all well socially distanced on the paths and grass around the war memorial.
He agreed with the MP about the importance of ensuring Remembrance Sunday and the two-minute silence had been observed at the parish church.