Theatre school pupils say 'the show must go on' 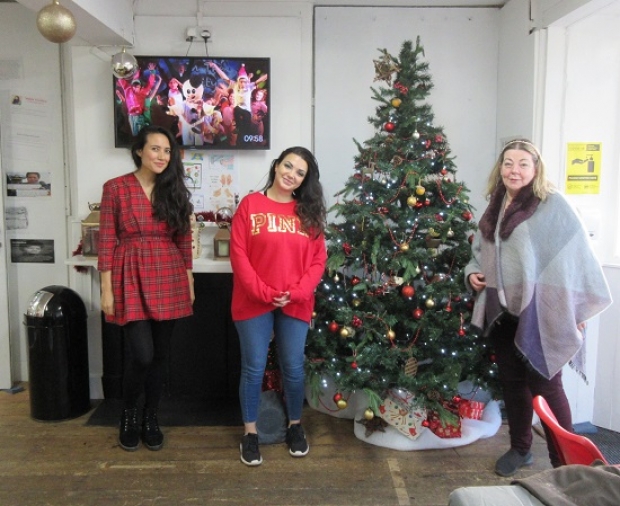 Celebrating the Christmas video produced by pupils at the Susi Earnshaw Theatre School (from left to right) Melissa Gillespie, teacher; Julia Hammond, headteacher; and Susi Earnshaw, school founder and artistic director of the Bull Theatre
With their performances for Barnet's Christmas Fayre and their annual pantomime at the Bull Theatre all having to be cancelled because of the covid.19 pandemic, pupils at the Susi Earnshaw Theatre School were still determined that 'the show must go on'.

They have worked together to present and produce a five-minute song and dance routine entitled Make Time for Christmas, which was written for them by creative director, Matthew Sweetapple, of Barnet, who is one of the Bull’s patrons.
Their video, which includes numerous solo appearances, dance routines and choruses, is to be shown on the school’s website (https://www.sets.org.uk/) and social media platforms such as Facebook, You Tube and Instagram.

For headteacher Julia Hammond and fellow teacher Melissa Gillespie, who helped with the production, the video provided a much-needed opportunity for the pupils to be creative and deliver a performance in which they could all take pride.
“Because of lockdown restrictions the Christmas Fayre was cancelled and so was our pantomime, so we have had very few opportunities either to rehearse or perform at the Bull and we have missed that so much. 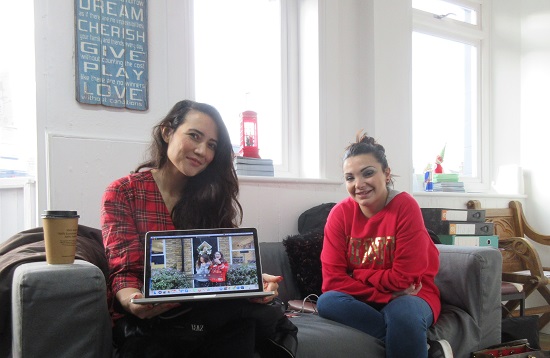 “Once Matthew wrote Make Time for Christmas for us, and we were able to film and record the song, the whole school was able to join in. We were able to film much of it outside,” said Julia (right).
Melissa (left) was impressed by the pupils’ enthusiasm despite them having to cope with social distancing restrictions.

“They’re full of creative imagination and they leapt at the chance to create their own video.
“So, when they sing one of the lines, ‘time flies by when you are having fun’, they really mean it.
“They have their own visuals, holding up signs saying, ‘the show must go on’, ‘thank you NHS’ and ‘love you mum’, so it’s all very heartfelt.”

The school is hoping to raise money over Christmas and the New Year for the charity appeal, Until the Curtains Rise, which is co-ordinating help for out of work and hard-up theatrical workers.
School founder Susi Earnshaw is starting auditions ready for the 2021-2 academic year starting next September. 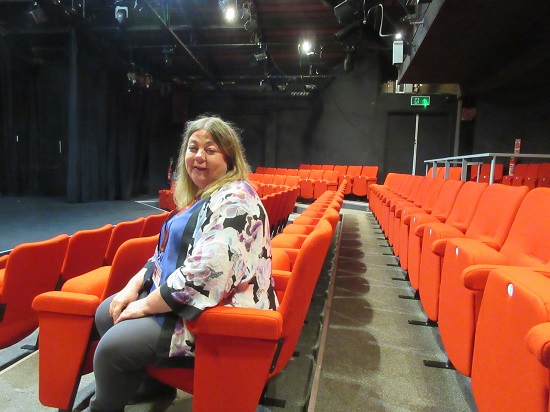 As artistic director of the theatre, she is also looking ahead to when it might be possible to re-open the Bull for public performances.
Once the government has lifted restrictions, perhaps after Easter, she hopes to stage regular Friday night music nights and other events.

“Our trouble is that the theatre is small – with 148 seats – and we can’t really operate with social distancing and stay safe.
“But as soon as we get the all-clear we hope to open every Friday evening, with guest music nights, perhaps even an evening of bingo. We are open for ideas.
“We shall certainly be keen to stage a children’s show and our pantomime, Jack and the Beanstalk, which should have been on this Christmas, is written and ready to go for next year.
“Although we haven’t had any productions to rehearse and to work on, we have been able to spend more time on theatre and dance techniques, and that will help the pupils become stronger performers. They’re just bursting to do a show.”

This is the 30th anniversary of the founding of the school which Susi started as a Saturday theatre school at All Saints Church, Whetstone, and which moved to the Bull in 2004.
Melissa was one of Susi’s first pupils, joining at the age of four, followed three weeks later by Julia, then aged eight.
Julia started teaching at the school in 2006, became deputy head and has been headteacher for the last six years. Melissa, who joined the staff two years ago, teaches screen acting and life skills. 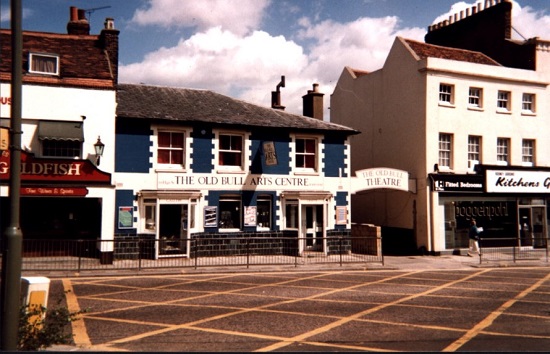 This is also the 45th anniversary year of the original opening of what was formerly the Old Bull public house as a craft fair and gallery – the first step on a long and tortuous struggle that culminated with the opening of what in 1988 was a 180-seat theatre.
Susi’s theatre school – for 9- to 16-year-olds – took over the lease when Barnet Council switched the focus of its theatrical and artistic endeavours to the newly opened artsdepot in North Finchley.
Promoted at the time as Barnet’s “multi-functional arts facility” – with a 400-seat theatre – the artsdepot was predicted to become the Barbican of North London.

The decision to construct and fund the artsdepot was a tribute to the success of theatrical and musical productions at the Bull, which had become a popular, go-to venue for many North London events.
Inevitably there was concern that High Barnet was about to lose its only arts centre and a Save the Bull group was launched with the backing of supporters of Barnet Borough Arts Council.
When the theatre school was assigned the lease by Barnet Council there was a sense of relief that High Barnet would continue to have a venue for budding actors and actresses. 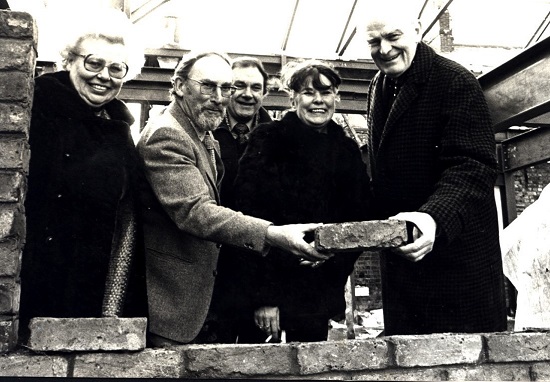 Boxes of files and records kept by the Bull’s most indefatigable defender, Pam Edwards (far left) – who is the long-standing secretary of the Barnet Borough Arts Council – give a fascinating insight into the struggle to create an arts centre for High Barnet.
Fading press clippings from the Barnet Press and numerous financial appeals highlight a dramatic story of repeated threats of closure and near demolition.

Indeed, the Old Bull has had more than its nine lives and was on the point of being pulled down in the 1960s to provide an access road for the proposed but never agreed by-pass for the High Street that was to run alongside the eastern edge of the town centre, from the A1000 road junction with Station Road, across Meadway, and on to Hadley Green.
Barnet Urban District Council had purchased the pub from Benskins Brewery in 1961 in support of Hertfordshire County Council’s proposal for what would have been a High Barnet ring road, allowing the High Street to be converted into a pedestrian precinct – a project that was finally abandoned in 1972.

When Barnet Borough Council was established in 1965 and took over responsibility for the Old Bull, it was used first as a civil defence centre and then as offices for Barnet Magistrates Court, ultimately becoming surplus in 1975.
Once this large council-owned building became vacant on the High Street, it presented a tantalising prospect because in the early 1970s organisers and supporters of the annual Barnet Festival were desperate to find a town centre venue for the performing arts.

Local church halls, cinemas and other public rooms were either being sold off for redevelopment or were failing to meet the new safety requirements for public entertainment that had been introduced by the Greater London Council.

High Barnet’s art lovers responded with alacrity. Pam Edwards and Luke Dixon organised the first meeting of the Barnet Centre Action Group; they invited the orchestral conductor Norman del Mar to become President; and launched their campaign to find a suitable building for a community arts centre.
To stimulate interest the group arranged an impressive line-up of events for the 1973 Barnet Festival including a folk concert in Ewen Hall, an art exhibition at the Tudor Hall, drama in the Wood Street council chamber, puppets at Church House and supper at the now demolished Salisbury Hotel.

Such was the enthusiasm and strength of support for what was then the Barnet Centre Association – under the chairmanship of folk singer Dennis O’Brien – that as soon as the Old Bull became available the association set about securing a monthly lease, and in November 1975 the unoccupied building was re-opened as a venue for weekly craft fairs and then a craft shop and art gallery.

Slowly but surely the Old Bull was being transformed. Space was found for six craft studios. The first floor was strengthened as part of a job creation scheme for unemployed youngsters sponsored by the Manpower Services Commission.
A room overlooking the High Street was turned into a 30-seat theatre which became a popular venue for children’s and youth drama classes and rehearsals for local music groups.

Second-hand book fairs and jumble sales helped with fund raising and by 1980 the association was ready to expand. 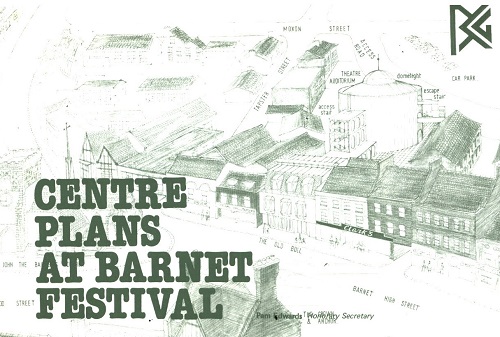 Initially there were plans for a dome shaped 500-seat theatre behind the Old Bull, but this was scaled down to a 180-seat theatre. When this application was rejected by Barnet Council the project was revised again and approval was finally obtained in 1981.
A phased, self-financing programme of work had been agreed, starting with the conversion of stables into craft workshops; the opening of a new ground floor studio theatre; and then, when funds permitted, the construction of a theatre large enough to seat 180.
At a fund-raising crafts sale that year in Ewen Hall, the guest of honour was the famous band leader Humphrey Lyttleton, who lived at Arkley, and was determined to lend a hand. 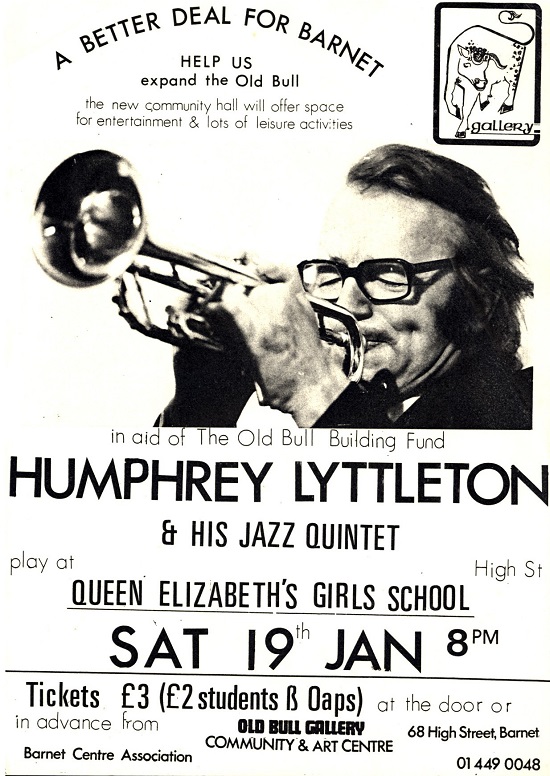 Privately he thought the possibility of building a theatre behind the Old Bull’s “modest shop-front” in the High Street was so remote, that he promised his band would appear free of charge on the opening night – a “debt of honour” that he had the greatest satisfaction in redeeming seven years later.
Press cuttings, photographs, and heaps of correspondence from the 1980s bring to life a decade long roller coaster ride of ups and downs, a daunting struggle by hard-bitten volunteers who never wavered in their commitment to provide a community arts centre.

Craft workshops in the former stables were opened in 1982 by the Mayor of Barnet, Councillor Vic Usher and Humphrey Lyttleton, who had been appointed arts centre president.
Completion of the downstairs studio theatre in 1984 was another milestone. Construction of the main theatre continued with the assistance of the Manpower Services Commission which financed the employment of 12 building workers as well as artists and administrators.
By the end of 1986 the Old Bull Arts Centre was winning plaudits from far and wide and, in the words of Barnet Advertiser, had become “one of the most exciting fringe venues in London”.

Opening the shell of the main theatre for events added fresh impetus as did installation in the studio theatre of 90 surplus seats which had been rescued from the Cottesloe Theatre on the South Bank. They were declared ready for use with a dramatic flourish by the National Theatre actress Zoe Wanamaker.
These were the glory days: a former pub was now an artistic and theatrical hub offering a platform for attractions to suit the widest possible tastes. 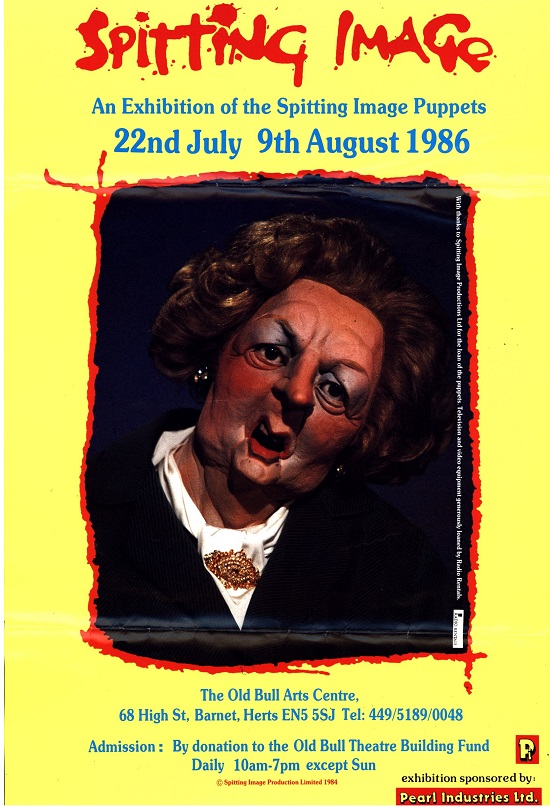 Footfall increased spectacularly when the Old Bull staged a record-breaking exhibition of puppets from the 1980s hit satirical television programme, Spitting Image, which attracted nearly 10,000 people.
Finally, with the help of a council grant, the go ahead was given to fit out the 180-seat theatre.

A gala evening in February 1988 to celebrate the official opening of “the theatre upstairs” featured a return of the Spitting Image puppets, including performers Chris Barrie, Steve Nallon and Nigel Plaskitt. Humphrey Lyttleton’s band fulfilled his promise to play at the inaugural event.
Throughout the 1990s plaudit followed plaudit for a succession of packed programmes of imaginative and varied art exhibitions, theatrical productions, music, and other events.