The generosity of Barnet’s benefactors 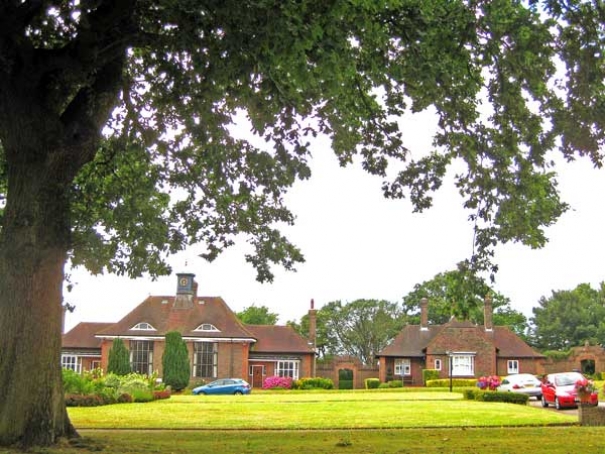 Also in Wood Street are almshouses of the Eleanor Palmer Trust – which is sponsoring the pop-up shop in the High Street supported by the Barnet Society.

All told Barnet has well over a hundred almshouses, and few outer London boroughs can boast a richer heritage, clearly having benefited from the fact that it was a day’s ride from the city and was regarded as a nearby country town where the poor were in need of support.

Following that tradition, the daughters of Thomas Watson, proprietor of Sutton & Co, road hauliers, built a delightful estate of bungalows in their father’s memory for “old and loyal employees” of his firm.

Robin Bishop, chair of the Barnet Society’s planning and environment sub-committee, and a long-standing member of the Victorian Society, has researched their history and architectural significance:

Thomas Watson, general manager and later proprietor of Sutton & Co., Hauliers, died in 1910, and his daughters Annie and Florence commissioned this estate for “Old and Loyal Employees of Mssrs Sutton & Co. Carriers” in his memory.

It comprises eight bungalows, individual and semi-detached (for 11 singles and couples plus warden) on three sides of an open-ended square, symmetrically composed about the axis of a central hall for dining and social activities.

The estate was opened in 1914 and celebrated its centenary this July.

The architects were Bourchier Burmester & Galsworthy; the principal in charge is believed to have been John Burmester (1858–1940), who later designed a house for Florence, Newnham Edge near Basingstoke. 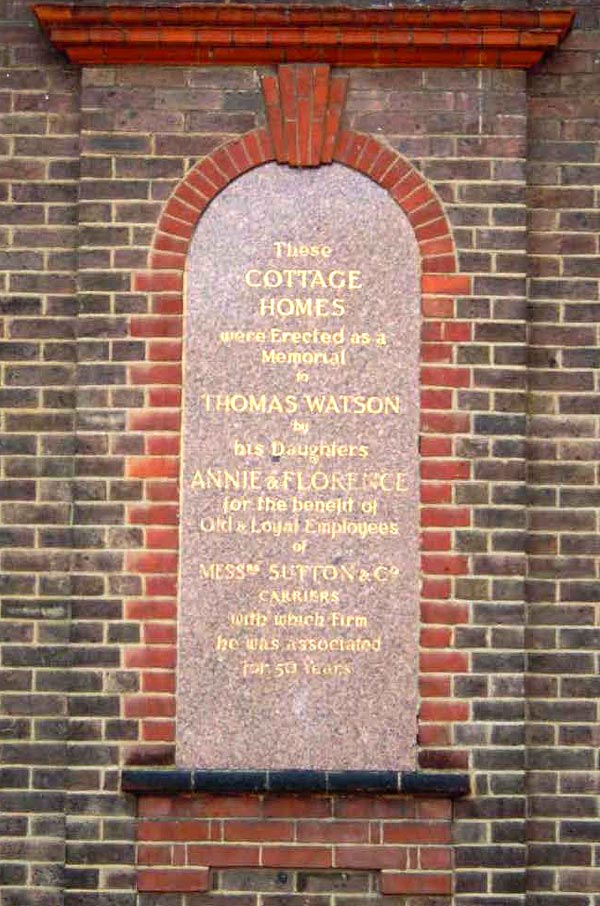 The bungalows are in a Home Counties vernacular and the hall in a more formal Queen Anne style, both reminiscent of Lutyens around the turn of the 20th century.

The buildings are unified by brown brick and clay tiles with red-brick dressings, the houses linked by garden walls with gateways surmounted by projecting brick hoods with ball-and-post accents; all simply but beautifully built (though after a century, not immune to subsidence on the clay hillside).

The central court is formally laid out as lawn with a central sundial. The houses have both individual and shared rear gardens.

Since then, the square has been visually closed to the east by Colgate Court (Thomas Harrison 1996); and Jubilee Cottages (living-architects, 2011) have added wings to north and south. Both developments make a fair job of replicating Burmester’s style.

The ensemble is a classic of Edwardian philanthropy and communitarianism.

The obvious precedents are the Leathersellers’ and earlier almshouses, in Barnet and elsewhere; but more immediate inspiration may have come from Baroness Burdett-Coutts’ Holly Village, Highgate, by H. A. Derbyshire (1865) and Octavia Hill’s Whitecross and Redcross Cottages and Garden, Southwark, by Elijah Hoole (1887–90).

Socially and stylistically, TWCH may owe even more to the Drapers’ Cottage Homes (1897) in nearby Mill Hill – two delightful estates for retired department-store workers by George Hornblower for James Marshall (of Marshall & Snelgrove, a leading store of the day).

The Watsons and their architects are also likely to have been aware of George Cadbury’s garden village at Bourneville (1879–1970s) and Lord Lever’s garden city at Port Sunlight (1888–c. 1914).

In Barnet, their vision is echoed on a miniature scale.

The key differences between that vision and traditional almshouses are that the patron was a modern business, not a squire or agricultural landlord; that residents lived in free-standing houses, not a terrace or court; and that the architecture was the modernism of its day – the gentle, democratic language of the Arts and Crafts rather than either the Gothic Revival or the Classicism of the Edwardian Grand Manner.

It is a pity that most of the TWCH archives were lost in a wartime fire at Sutton & Co.’s offices, and that more is not known about the personalities and beliefs of Annie and Florence.

It would be interesting to know how two women set about their project in a male-dominated world; and whether they were inspired simply by filial piety, or also by the socialist and women’s suffrage movements, very active at that time.

Either way it is a remarkable achievement, and a testimonial to Annie and Florence as well as their father.

More in this category: « Barnet Museum’s garden party brings history to life Milestone for the almshouses »