Milestone for the almshouses 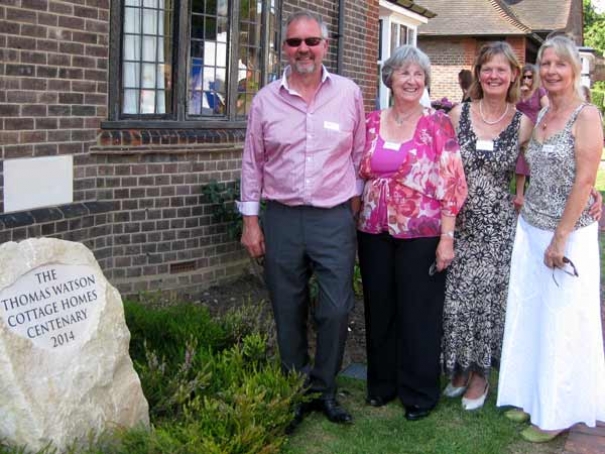 From left to right Robert Colgate, Mrs Jenny Harrold, Mrs Sarah Housden and Ms Heather Colgate
Descendants of the family that established the Thomas Watson Cottage Homes, which are tucked away at the end of Leecroft Road, have unveiled a commemorative stone to mark their centenary.

Residents and guests filled a marquee on the lawn to mark the 100th birthday of an estate of bungalows that celebrate High Barnet’s good fortune over the centuries in attracting benefactors who have built almshouses for the poor and elderly.

Three of Thomas Watson’s great-great-grandchildren – Robert Colgate and his sisters Mrs Sarah Housden and Ms Heather Colgate – unveiled the commemorative stone.
Their cousin Mrs Jenny Harrold, chair of the trustees, who welcomed guests to the centenary tea party (24.7.2014), described the family’s continuing connection with the homes and their care and interest in the welfare of the residents.

Watson was proprietor of Sutton & Co, road hauliers and his daughters, Annie and Florence, established the almshouses in memory of their father for “old and loyal employees”.

Mrs Harrold said aunties Annie and Flo, as they were known to residents, established the endowment for the purchase of the land and the construction of the original twelve cottages.

She felt honoured to be chairing the centenary event. “For our family this is a very special place where 100 years ago the two aunts declared the home open. Here today we have three direct descendants of Thomas Watson and ten relatives connected through marriage.”

Today’s residents include former employees of the National Freight Consortium and the delivery company DHL. Mrs Harrold reminded them that, unlike their predecessors, they could now take the keys to their property when they went out and also stay out after 10.p.m.!

A commemorative stone marking the centenary of the Thomas Watson Cottage Homes was unveiled by three of his great-great- grandchildren, Robert Holgate, Sarah Housden Heather Colgate.

More in this category: « The generosity of Barnet’s benefactors Battle of Barnet dig could enhance the role of Barnet Museum »