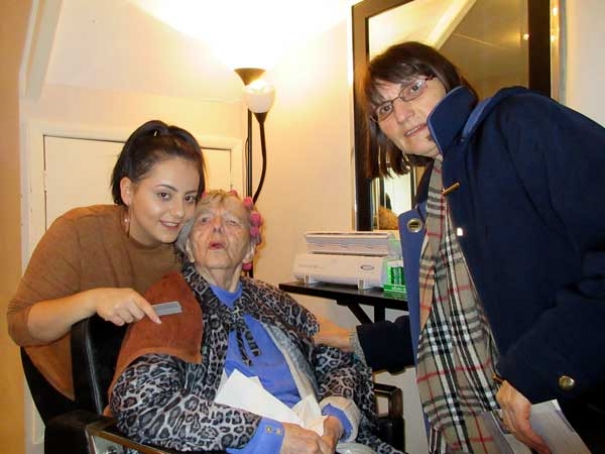 Greta Nellie Druce, 102 in November, getting ready for a sing song with her hair stylist Pammie Sardillo (left) and her daughter Diane Druce at JJ’s hairdressing salon in Alston Road, Barnet.
A sing song going through favourites of yester-year is a highlight at a Barnet hairdressing salon when 102-year-old Greta Nellie Druce pays her weekly visit to have her hair done.

Hair stylist Pammie Sardillo joins in as Greta goes through a repertoire that usually starts with How Much is That Doggie in the Window, followed by You Are My Sunshine and It’s a Long Way to Tipperary.

A very special number for Greta is the World War I marching song, Pack Up Your Troubles in Your Old Kit Bag – a moment to remember her two brothers killed as children in a first world war bomb attack on London, and the brother she lost in World War II.

Greta has lived in Manor Road, Barnet, with her daughter Diane Druce, since the family returned to the UK in 1965 after emigrating to Australia for five years.

In her fifty-plus years living in Barnet, Greta became quite an institution. She was Brown Owl for the Brownie pack at the Methodist church and helped with music lessons at Foulds School, teaching countless children how to play the recorder.

Greta celebrated her 102 birthday in late November and friends and neighbours joined her for a special birthday party.

Diane drives her mother to JJ’s hairdressing salon in Alston Road, Barnet, every Tuesday, and for her stylist Pammie it’s a chance to put in the curlers for a very popular customer.

“Sometimes Greta finds it a bit difficult to lean back her head when I wash her hair, but she’s always so cheerful and I love to hear her sing, and it’s wonderful to have a chance to join in singing songs that mean so much to her. She calls me crazy, but I can’t help singing along with her.”

Greta had a dramatic childhood. Her family lived in Camberwell during World War I and one evening in October 1917, just before her second birthday, they were all over the road at another house that took a direct hit after a bomb was dropped by a Zeppelin airship.

It’s not often the enforcement officers see a 1915 date of birth,
so no wonder they scratch their heads

She was pulled clear alive, along with her parents, Henry and Nellie Boyce-Balls, but two of her six brothers were killed, and another brother was badly traumatised.

Greta, who married Wes Druce -- Nathaniel Ebenezer Wesley Samuel Druce to give him his full name – joined the Women’s Royal Air Force in World War II and played the bugle in the WRAF’s central band, one of only two all-female bands in the British Armed Forces.

“At the end of the war, she toured Europe with the central band as part of the liberation, so no wonder she can’t stop singing all those war-time melodies,” said Diane.

Greta’s blue disabled badge – used, for example, when her daughter drives her to the hairdresser’s – invariably arouses the interest of parking enforcement officers.

On the day she visited JJ’s for her birthday hairdo, an ever-watchful enforcement officer in Alston Road had spotted the date of birth on the badge – November 1915 – and insisted on checking it out with his office, wondering whether it was perhaps a fraud.

“It’s not often the enforcement officers see a 1915 date of birth, so no wonder they scratch their heads,” said Diane.

More in this category: « Appeal for new swimming pool roof Preserving footpaths – you can help »