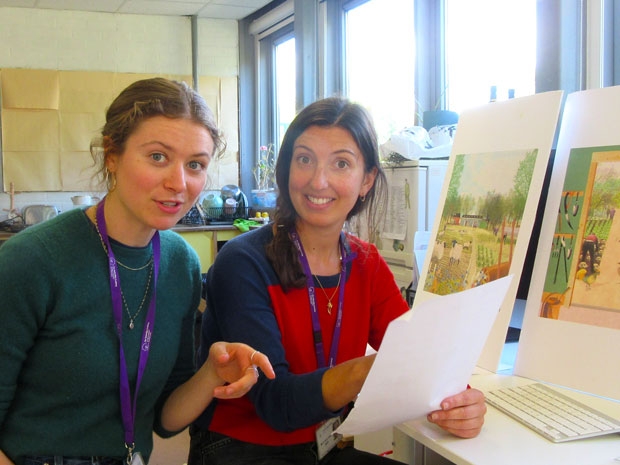 Educational manager Lucy Hollis (left) and farm and outdoor learning manager Sarah Alun-Jones
A school and community farm in a six-acre field next to Totteridge Academy is a step closer to being established after the success of a fund-raising appeal.

A planning application is now to be made to seek approval for the construction of a multi-purpose outdoor classroom where up 250 pupils a year will be able to attend classes in farming and growing food.

The farm is being established by a recently formed educational charity, Grow – www.grow-up.co – which hopes the project will be supported by other Barnet schools as well as the wider community.

“We are very excited to have reached our funding target and this means we can begin the planning process for our first school and community farm,” said the charity’s founder, George Lamb.

The proposed multi-purpose outdoor classroom – to be built from carbon neutral hempcrete which is made from hemp stems – will have space for a class of 25 pupils.

Livestock already at the farm include a dozen rare breed Shetland sheep, two beehives and chicks soon to be hatched for a small flock of rare breed Lavender Pekin chicken.

Sarah Alun-Jones, farm and outdoor learning manager, is hoping to begin cultivation with the pupils next spring and they will start by growing a range of vegetables, salad crops and flowers.

Our aim is to produce vegetables for the school canteen, and hopefully for the local community as well.

“Our aim is to produce vegetables for the school canteen, and hopefully for the local community as well.”

Lucy Hollis, educational manager for the farm project, is hoping that all year seven and eight pupils at Totteridge Academy – aged between 11 and 12 – will benefit from a lesson a week in food, farming and well-being.

“Lessons in the classroom will be backed up by an introduction to growing your own food in the field and we should be ready to start planting out next spring.”

Mr Lamb said Grow had been established as an educational charity to spread the word about the importance of taking care of the environment and increasing awareness about where food comes from.

“We are very lucky to have found a site in the middle of the Green Belt. We still face a lot of hurdles and red tape but at last the farm is taking shape.”

To celebrate its success in meeting its funding target Grow is to hold a Harvest Celebration at Totteridge Academy on Saturday 7 September between 12noon and 4pm.

As well as tours of the farm to see the sheep and some visiting goats, children will be invited to take part in practical projects – including using blackberries to produce a purple dye for colouring flags.

More in this category: « Plans for attracting High Street shoppers and visitors New centre for swimming and keep fit »