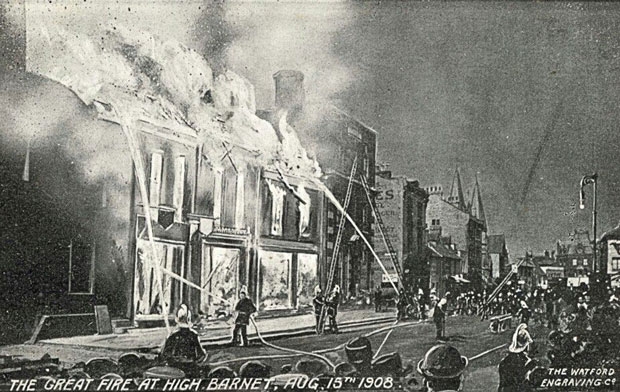 Three shops in Barnet High Street – next to Barclays bank – were destroyed in the “great conflagration” of 1908 when firemen complained they had been hampered by a shortage of water
Yet another change of owner of a Barnet High Street shop with a distinctly checkered history, has evoked memories of the day the premises were destroyed in what become known as the “Great Fire of Barnet” of August 1908.

Three shops were destroyed in the blaze after firemen complained that a shortage of water had hampered their efforts to tackle a “great conflagration” in the centre of the High Street.

When the property where the fire started was rebuilt, the premises went on to become the long-standing home of stationers W H Smith before the firm moved to the Spires shopping centre.

Most recently this High Street shop (next to Barclays bank) has been an outlet for Living Style Furniture and later other stockists, but a planning application has now been submitted by new occupants for an internally-illuminated fascia sign for a branch of the outdoor shop Millets.

The rebuilt shop is noticeable for the checkered pattern in the facing brickwork between the first and second floor – a design of alternative squares in the style of a Battenberg cake (made for the first time to celebrate the marriage of Princess Victoria to Prince Louis of Battenberg in 1884).

So fiercely did it rage that within a couple of hours of the alarm being raised three shops had burned to the ground.

Before its destruction in the fire of Saturday 15 August 1908, the property was known as Battenberg House – a former owner was D Schmidt. The checkered decoration in the brickwork of the façade is said to reflect that link to the past.

However, similar checkered brickwork is a distinctive feature of Barnet parish church which was restored by the celebrated architect William Butterfield in 1872 – a decade before the pattern became popular in Battenberg cakes.

A graphic account of the “Great Fire” was published by the Barnet Press which said the fire started in what were then the premises of Messrs Harbord & Co.  One of Mr Harbord’s two sons was awakened by the smell of smoke and the alarm was raised. 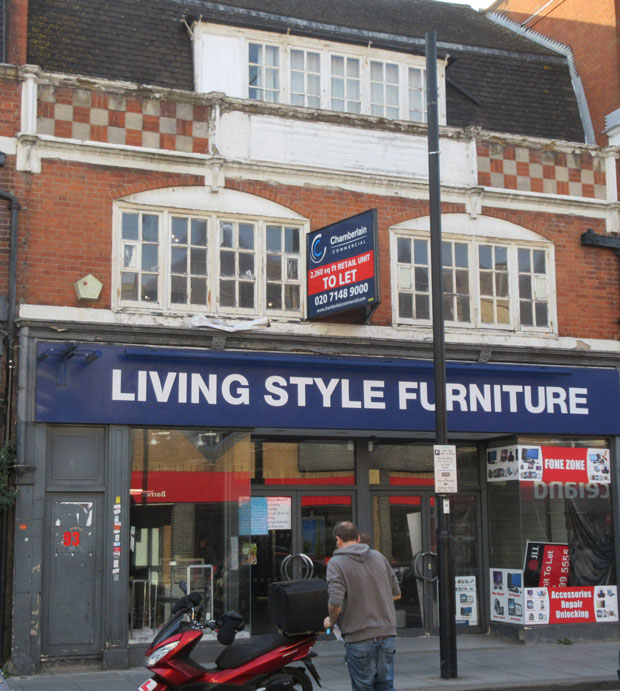 Barnet’s manual fire engine coupled up to the fire hydrant opposite the Barnet Press office, but the firemen found “an indifferent supply which was exhausted before Mr Harbord’s building collapsed”.

The fire engine was having to rely on a water tank at Hadley and subsequent reports discussed the shortage of water and the failure to control the outbreak.

“So fiercely did it rage that within a couple of hours of the alarm being raised three shops had burned to the ground.

“The New Barnet fire engine had arrived but could get no water until perhaps three-quarters of an hour had elapsed.

“By this time the mischief was done; two other shops, those of Mr Wells and Mr Peake, had become hopelessly involved and the residence of Mr W Baughen was gutted.”

Barclays bank building next door was only slightly damaged.

The Barnet Press account speculated on the start of the fire:
“Early reports had to be received with caution until due inquiry had been made but suggested the fire was caused by a lighted lamp left in the basement by a member of the household, whose hobby is photography, and who had been developing plates in an improvised dark room.”

If Millets do go ahead with the opening of a new outlet it will be a return of the brand name to Barnet High Street.

There was an earlier Milletts shop opposite Church Passage – an outlet for the haberdashery and outdoor range of Morris Millett whose shops merged with those of J M Millet in 1986 to become the Millets of today.