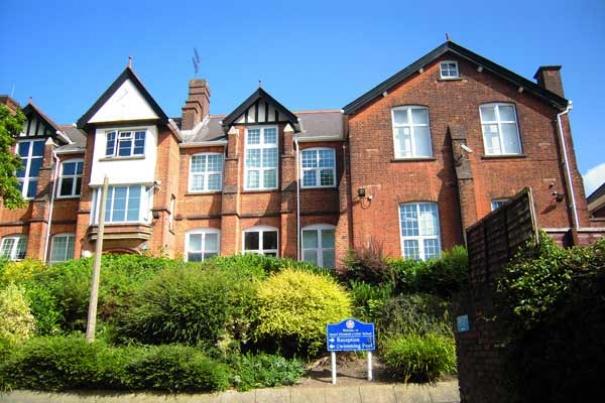 Queen Elizabeth's Girls’ School
Queen Elizabeth I’s charter of 1573 provided for ‘boys and youth’, but it was not until 1888 that Barnet got a school for girls.  Its oldest buildings are not just a gentle monument to a pioneering educational movement, but fine examples of the Arts and Crafts style.

They deserve to be on the Council’s list of local buildings worth protection.

Queen Elizabeth’s Girls’ School’s original home, Russell House on the High Street, was gradually altered and extended between 1890 and 1909 by the architect John Ladds (1835-1926). 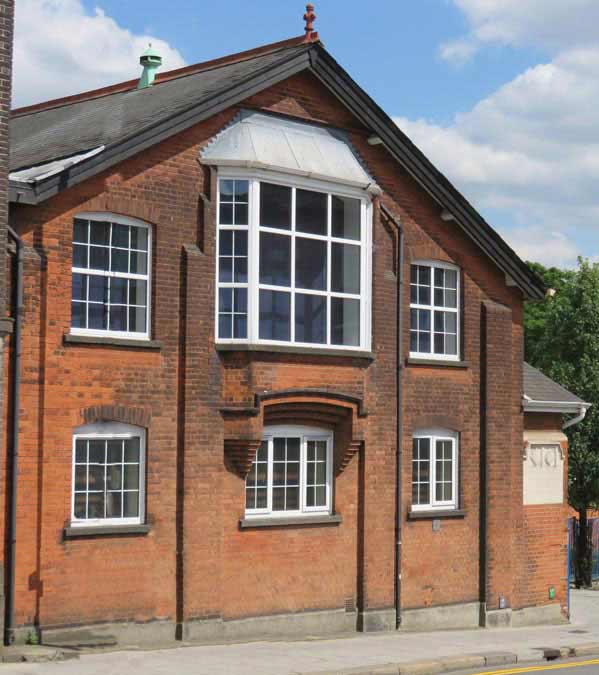 The former assembly hall (now gym)About a third of the cost, £600, was donated by two governors, Misses Annie & Lucy Paget (who also sponsored the Hyde Institute in Church Passage).

Ladds’ work is not obvious from the road.  His assembly hall (now gym, 1909) faces the High Street, but is dwarfed by J.W. Fisher’s Neo-Georgian building (which replaced Russell House in 1924-7).

The rest is mostly obscured by modernist additions in the 1960s & 1970s, and can only be glimpsed from Meadway.

However they are fine examples of Arts and Crafts architecture and, I would argue, not only the best buildings on the campus, but among the best of their period in Chipping Barnet.

Their sturdy red brick and clay tiled construction is enlivened by original touches that give them an informal, almost domestic, charm.

The assembly hall façade is modest in size, but its symmetry, brick buttresses and pitched roof give it a Classical flavour; and its big central bay window supported on idiosyncratic brick corbelling lends a touch of grandeur.

Through it can be spied the fine timber trusses over its double-height hall. On its south wall, facing down the hill, is an entrance door – perhaps once the main one.

A stone plaque on the hall wall commemorates its opening.

Running back from the High Street is a two-storey classroom building, but the fall of the ground makes it seem much taller. It is cranked in plan, its walls are dramatically buttressed, and above them rides an array of brick, rendered and half-timbered gables completing a highly picturesque effect.

This style was popular at the turn of the century, in England and abroad. It was strongly influenced by the country houses of Norman Shaw, whose Grim’s Dyke nearby in Harrow helped start the trend in 1870.

Imagine Ladds’ buildings in blackened sandstone or white harling, and you might almost be looking at work by his more celebrated contemporary, Charles Rennie Mackintosh.

The stone plaque on the hall wallThe combination of traditional materials and informal composition was a defining feature of the English Free Style.

It contrasts with both the Victorian Gothic of Queen Elizabeth’s Boys’ School (demolished to make way for Barnet College) and the Queen Anne style of London Board Schools.

I don’t suppose Ladds intended a feminist statement, but he gave QEGS a distinctive identity. His buildings were – and remain – a proud symbol of the value of education for girls in what was then still a small market town.

They have a quiet, human scale that has been increasingly lacking from architecture in the century since they were built.

They deserve to be on the list of local buildings to be protected, before pressures to expand or ‘improve’ the school damage or destroy their unique qualities.

More in this category: « The Battle of Barnet Project Barnet to match Tewkesbury’s banners? »