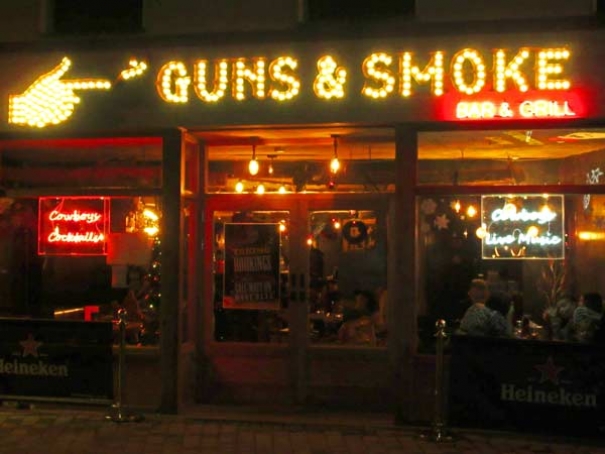 Some local residents think its illuminated sign is garish but others have welcomed the new venture
Guns & Smoke, the new American-style bar and grill opposite Barnet parish church, faces what looks like being a decisive shoot-out at Hendon Town Hall early in the new year.

A meeting of Barnet Council’s planning committee – on 8 January 2014 – is expected to take a final decision on its much-disputed frontage and illuminated sign.

The cafe’s location in Church Passage, at the heart of High Barnet’s Wood Street conservation area, has divided opinion.

Some local residents think its illuminated sign is garish, too bright and out of keeping with its setting so close to the church and war memorial; but others have welcomed the new venture, saying it has brightened up Church Passage and is popular with customers.

Guns & Smoke opened last autumn although Barnet’s planning department insisted at the time that it had not had an opportunity to consider a formal submission for planning permission and when it had still not been possible to resolve an earlier long-running dispute about the use of timber cladding.

Although the timber cladding was removed from the top half of the frontage, the new windows were not regarded as being entirely satisfactory. 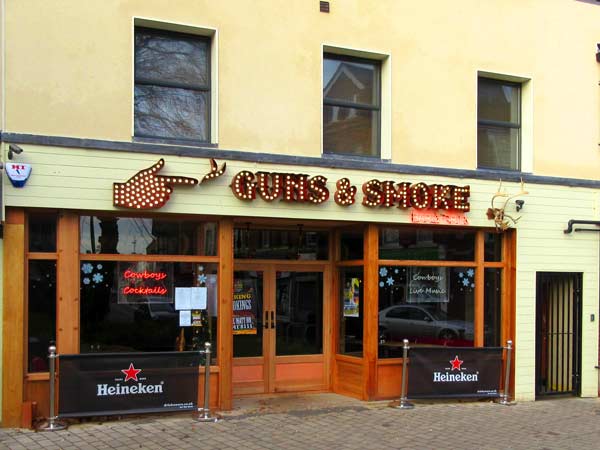 The Barnet Society was among the local organisations that objected to the planning application on the grounds that the fascia designs were not acceptable and that an illuminated fascia sign and lettering was inappropriate in a churchyard setting.

The Society has also objected to the retention of ground-floor timber boarding which was installed without permission in 2013 when the building’s frontage prompted widespread criticism and was said to resemble a Swiss chalet.

In a letter to the planning committee, Robin Bishop, who leads for the Society on planning and environment issues, said the unauthorised alterations at 1 Church Passage were “the most serious and conspicuous of a number of infringements” that have occurred within the conservation area in recent years.

Several of these infringements have yet to be rectified despite enforcement procedures.

If the complete restoration of the Church Passage frontage, as required by a planning inspector in January 2014, was considered to be impracticable, Mr Bishop said the Society hoped there could at least be “a design of restraint and dignity, in line with the Council’s published guidance, as befits Chipping Barnet’s most prominent civic and religious setting”.

“Unless the latest applications are turned down and a satisfactory resolution is found to the whole facade, the Council’s conservation policy will be widely perceived as worthless.”