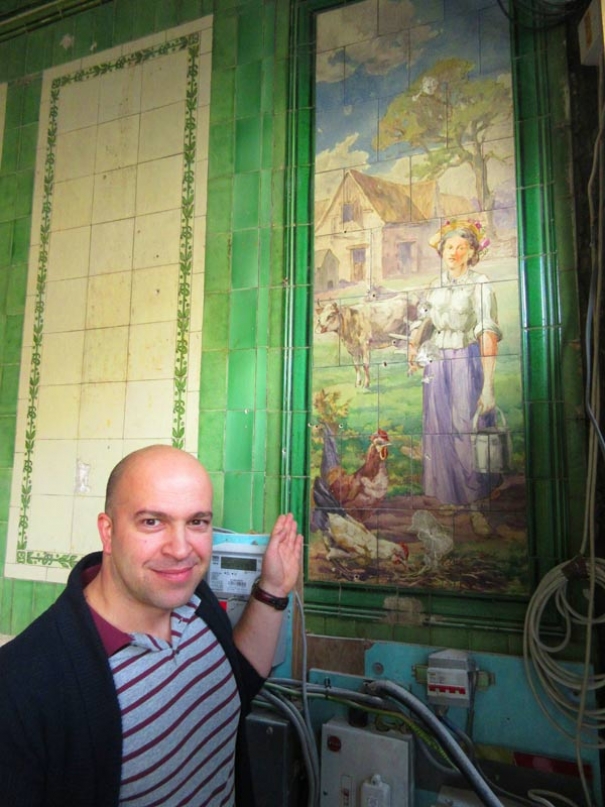 Ozgur Titizoglu and Barnet’s long-lost dairy maid
When workmen removed the last wooden panels covering up tiling on the walls of 89 High Street, Barnet, they were able to solve the mystery surrounding the painting of a dairy maid.

Holding her milk pail, with cows and chickens in the background, the dairy maid fills the first panel of decorated tiles that have been revealed on the walls of what is to become Ozzi’s Burritos, a Mexican-style takeaway.

In the bottom corner of the farmyard scene is the date 1910, when local directories listed the shop as being the Manor Farm Dairy. The tiles were installed by Carter & Poole Co Ltd.

Ozgur Titizoglu, who is converting 89 into a take-away selling Mexican wraps was amazed when he found the walls of the shop still had their original tiling from early in the last century.

“I saw the first couple of tiles once we removed some skirting board. I wondered if there were more of them, and then as we pulled away plaster-board, later tiling and then thick wall paper, we found the original tiles stretching from the floor to the ceiling.

“They are slightly damaged, but are really in remarkable condition. The wall paper probably protected them, and the first panel with the dairy maid is very special. She is already the talk of Barnet with her milk pail, chicken and cows.

We are keeping all the tiled walling exactly as we found it, although some of it is chipped and broken.

“We are keeping all the tiled walling exactly as we found it, although some of it is chipped and broken. The tiles make a real feature, and I have rearranged the lay out so that customers will be able to appreciate what the dairy originally looked like,” said Mr Titizoglu.

The discovery of the complete panel depicting the dairy maid is a reminder of the ever-changing nature of shops in the High Street and the years that 89 was a dairy selling milk, butter, cheese and eggs.

Since 1999, 89 High Street has been in the ownership of the Eleanor Palmer Trust since 1999, which acquired the property from the previous owners, the Samuel and Rebecca Byford Charity, when the two trusts merged.

Samuel Byford, who died in 1898, had a butcher’s shop at 89 High Street. He left the income from the property, then known as Essex House, to the Byford charity to be used for the expenses of six almshouses in Bells Hill.

A survey of the changing use of shops in the High Street was carried out last year by Barnet University of the Third Age. Jenny Kobish, one of the volunteers, said their research showed that 89 had changed hands regularly over the years:

Until the middle of last year 89 was a branch of the bakery chain Greggs, and was then converted into the craft and homeware pop-up shop 89 High Street, which has now relocated to 10 Union Street.

The discovery of the tiles prompted considerable comment on the Barnet Society’s Facebook page, and the consensus was that the picture of the dairy maid in a farmyard scene was a marvellous reminder of the shop’s interior early in the last century.