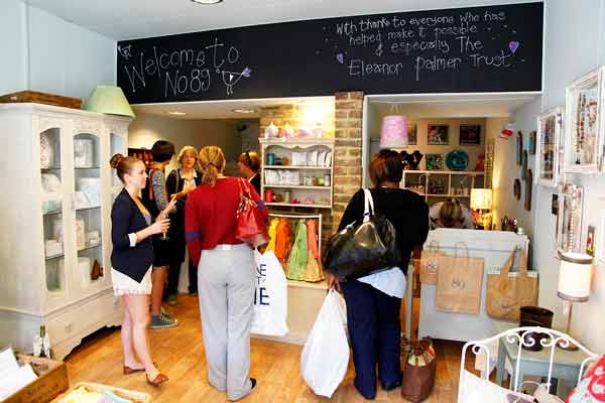 Ten stockists are selling a range of products including hand-made home furnishings, jewellery, cards, soaps and oils and glass and ceramics. They hope their presence on the High Street will help in the revival of the shopping centre and attract new traders and customers. 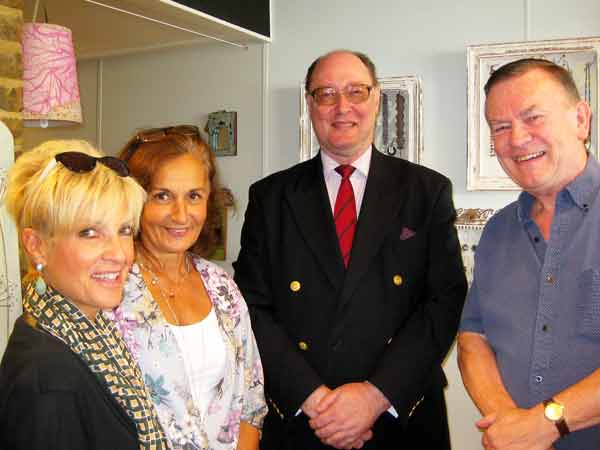 From left to right: Gail Laser of Love Barnet; Julie Eve, stockist of cards and cushions; and Stephen Lane and Tony Alderman, two of the Eleanor Palmer trusteesThe interior of what was once a branch of the bakery chain Greggs has been transformed into a showcase for the output of local entrepreneurs.

Representatives of the Chipping Barnet Town Team joined the staff for tea and cakes (12.9.2014) to mark the official handover of the premises by the owners, the Eleanor Palmer Trust, which had been keen to assist the Love Barnet team to establish their first pop-up shop.

One of the ten vendors, Jane Northam, who is also a manager of the shop and sells home furnishings and furniture, said that there had been “a fantastic response” from shoppers in the High Street who had been attracted by the range of hand-made crafts and products on display.

The pop-up shop would be trading for a minimum of three months and Love Barnet had every hope that their temporary tenancy might be extended to six months, taking it through the whole of the Christmas period and well into the new year.

Love Barnet received considerable help from the local community in fitting out the shop. Tutors in building trades from Barnet and Southgate College were among those first on the scene.

John Stiles, a master bricklayer, was helped by students to create a brick fireplace and other students and tutors plumbed in an old butler sink. Local painter and decorator Tim Patrick transformed the interior and Laura Felicity hung a design of wallpaper that is on sale in the shop.

Stephen Lane, one of the Eleanor Palmer trustees, described their offer to provide an outlet for the pop-up shop as another example of the Trust’s aims to encourage the endeavours of local people and to support the community.

“We are hoping the shop will be a great success and help local producers and stockists to develop commercially viable enterprises. 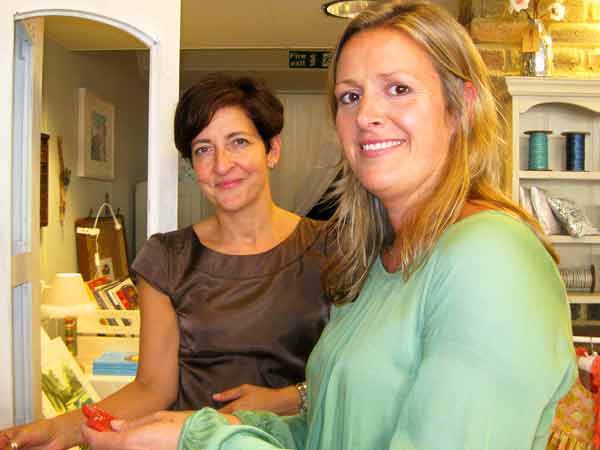 Admiring crafts and products two of the vendors, (from left to right) Giovanna Consigli, selling oils and soaps, and Jane Northam, stockist of home furnishings and furnitureThere had been talk for some time of establishing a hub of some kind for both the community and the charity and we are delighted to assist Love Barnet to create a High Street presence.”

Eleanor Palmer was one of Barnet’s more philanthropic residents and she made her bequest in 1558, giving “two acres of meadow land and its income for the benefit of the poor of Kentish Town and Chipping Barnet forever”.

The original Eleanor Palmer almshouses in Wood Street were rebuilt in 1930 and together with other almshouses and sheltered houses the Trust provides homes for well over 100 local people.

Rent from factories built on Eleanor Palmer’s remaining meadow-land provides an income from which the trustees make grants to needy individuals and voluntary organisations within the areas of Chipping Barnet and East Barnet.