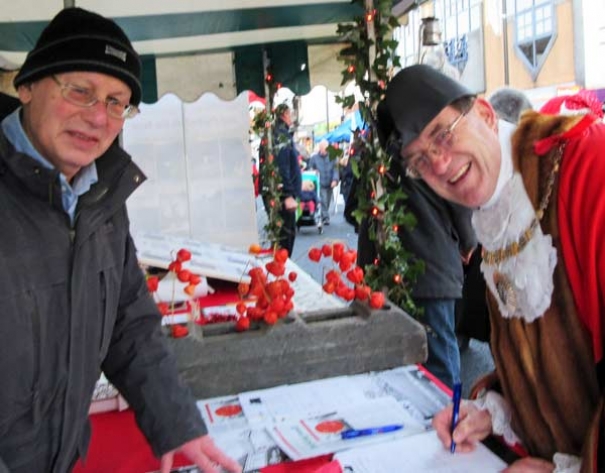 He was one of the many visitors to the Society’s stall at Barnet’s annual Christmas Fair.  A total of 130 people gave their names in support of the free parking petition, adding to the 320 who have already expressed their backing in an online petition on the Society’s website.

Councillor Rayner, who had earlier officially opened the Christmas Fair (7.12.2014), also signed up to the continuing campaign of Friends of Barnet Market.

He agreed that more should be done to support the market and local traders, and said he sympathised with the shopkeepers who have complained that Barnet Council has not done enough to publicise the free parking being made available on three Saturdays before Christmas.

“In my opinion serious consideration should be given to the possibility of continuing the free Saturday parking after Christmas as well,” said Councillor Rayner.

In supporting the Mayor at the official opening, Mrs Theresa Villiers, MP for Chipping Barnet, congratulated the Fair’s organisers on a packed programme of events and she too hoped local shopkeepers would benefit.

“Today is a good opportunity to shop locally and support the small businesses that are such a crucial part of our local community.”

At the official opening Councillor John Hart introduced the Mayor who then went on to welcome the Christmas Fair Festival Queen Sophia Theocharous and the Festival Princesses Monica and Melissa Faldes. 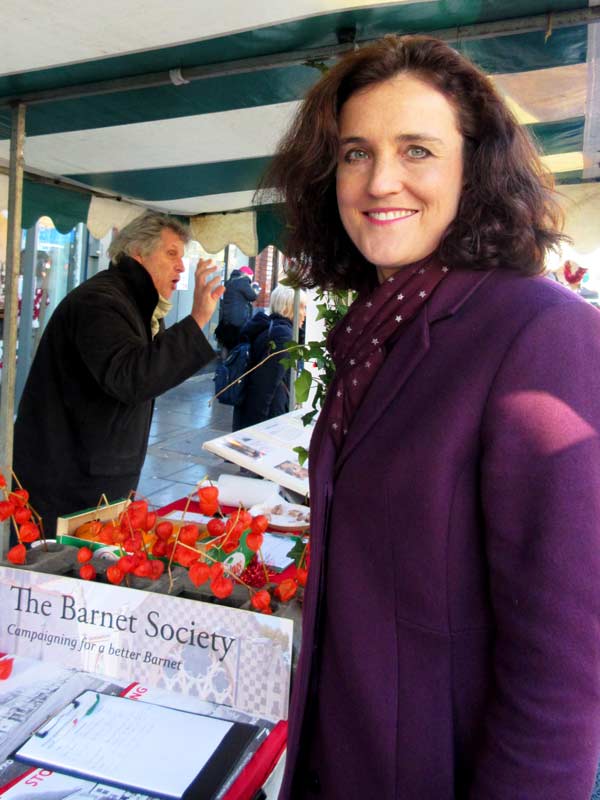 Councillor Rayner, who was accompanied by his wife Susan, recalled that since it started the 1990s the Christmas Fair had attracted the backing of an increasing number of local organisations for whom the event provided an important showcase and platform to promote good causes.

Later when visiting the stalls of the Barnet Society and the Friends of Barnet Market he paid tribute to the work of local campaigners in helping to foster a strong sense of community.

Another visitor of the Society’s stall was Councillor David Longstaff who repeated his undertaking to take forward to Barnet Council the demand for an hour’s free parking if the Society could present a robust and more detailed case.

The Society believes that Barnet would be far more attractive to shoppers if the existing but very limited free parking concessions were extended to allow an hour’s free parking in all three of the council’s car parks and in the High Street parking spaces, of which there are 63 between High Barnet tube station and Hadley Green.

At its next meeting in mid January the Society will review the level of support for the free parking petition and decide how best to continue to pursue its campaign.

More in this category: « No to free parking say Council and MP Parking claims another casualty »