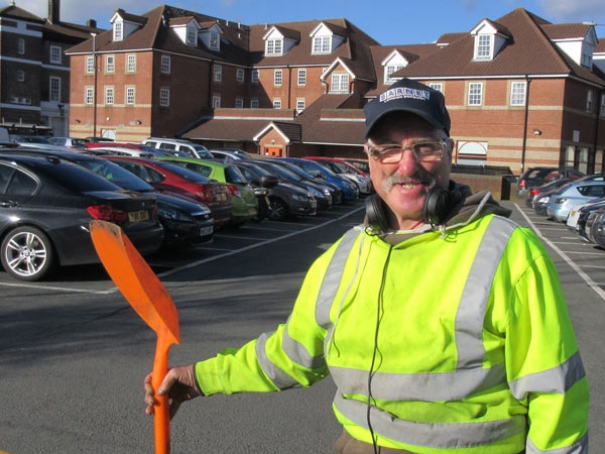 Mr Shrubb, who is 66 in March, has been the dedicated road sweeper for the High Street and Wood Street for the last 13 years.

He joined the staff of Barnet Council 38 years ago as a gardener in East Barnet and then switched to road sweeping.

“Rather than retire at 65, I opted to carry on working and I have every intention of completing my 40 years with the council.”

Such is his popularity with residents and traders for his contribution towards keeping the town centre tidy that his work was greeted with a cheer at the Barnet Society’s recent open forum (22.2.2018).

Among the accolades were praise for his regular emptying of the High Street litter bins and for his deft brush work that makes sure even cigarette ends are swept into his shovel and then deposited into green bags in his barrow.

As he sets off on his regular rounds – from Barnet Church up to Hadley Green then back down to the High Street to Queen Elizabeth’s Girls’ School – shoppers stop for a chat, and sometimes he gets offered a cup of tea or coffee.

“The High Street is a very friendly place. I like my job and I do get satisfaction from what I do. People in the street and the shops are very good to me, and they do look after me.

Yes, I do go to the trouble of picking up even cigarette butts because I like to keep the High Street as tidy as possible.

“Yes, I do go to the trouble of picking up even cigarette butts because I like to keep the High Street as tidy as possible.”

Litter bins at the busiest spots in the High Street, and along Church Passage, occasionally need to be emptied several times a day, and all the litter is packed into green bags ready for collection next morning to be incinerated at Brent Cross.

The only trouble he gets is sometimes from youngsters taking “the mickey, but I soon tell them to behave themselves”.

“Clearing up dog mess isn’t very nice to have to do either, but I do think there is less dog fouling these days, and most dog owners do clear up the mess themselves.”

Mr Shrubb’s barrow is decorated at the front with discarded fluffy toys – a penguin currently has pride of place – and it spends the night along with his brushes and shovels in a secure shipping container in the Fitzjohn Avenue car park.

The cleanliness of the High Street on weekdays was praised at the open forum during a discussion on ideas for improving High Barnet town centre.

There was concern about the continuation of street cleaning at weekends. John Dix – the Barnet blogger Mr Reasonable – said there were indications from Barnet Council data that cuts were about to be made in the weekend street cleaning budget.

Councillor David Longstaff told the meeting that he would make inquiries. He insisted that Barnet Council took the question of street cleaning very seriously.

Last year 45 people had been fined for dropping litter in High Barnet and enforcement officers were doing all they could to keep the streets as tidy as possible.

More in this category: « Why no upper deck for Barnet Hospital car park? High Barnet’s hedge-layers in action »