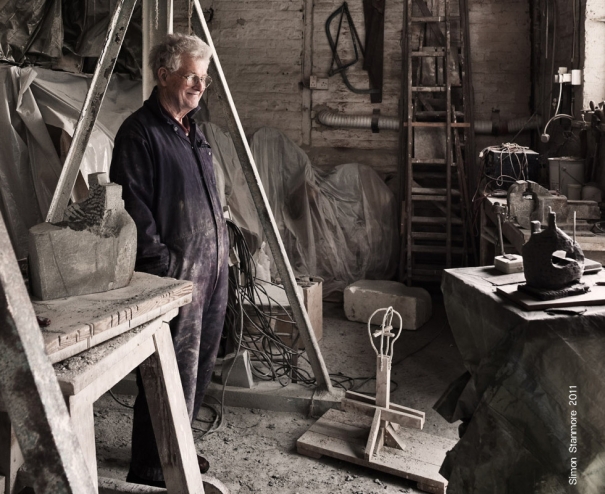 John Brown in his studio Simon Stanmore
Two sculptures by the noted Barnet sculptor John Brown are due to appear in Steven Spielberg’s most recent science fiction adventure, Ready Player One, which is being filmed in Birmingham and at the Warner Studios in Leavesden.

Barnet Society member Phyllis Oberman – a life member of the National Union of Journalists – reports on her visit to the sculptor’s studio gallery and garden. 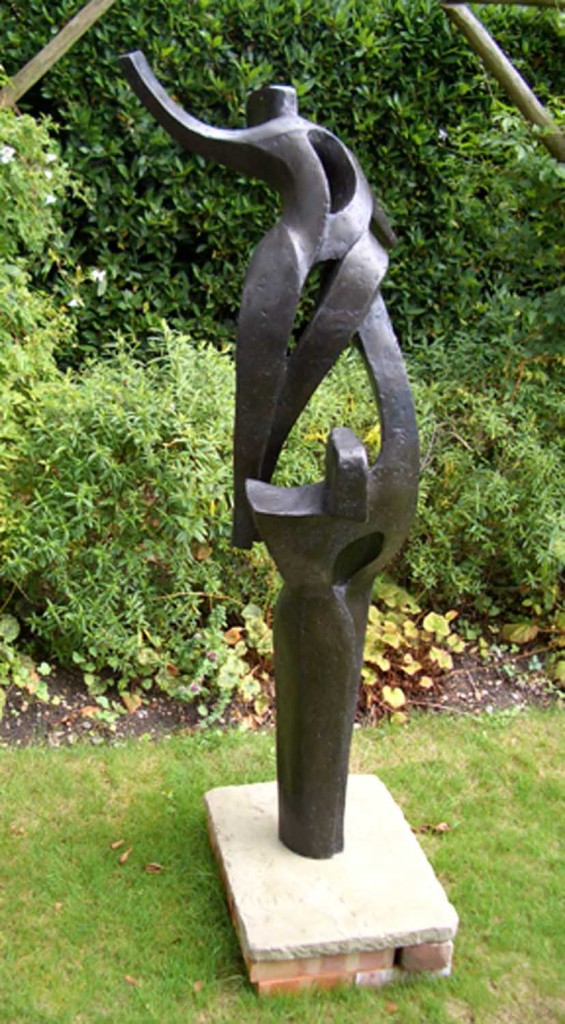 A once-in-a-year opportunity to see and touch an inspiring collection of sculptures is offered to those who join the mailing list of Barnet's noted sculptor, John Brown.

Usually held over several weekends in September those on the mailing list are invited to a special show to see John's latest sculptures in his large studio gallery and in the garden.

Anyone interested can register their name and email address to receive details of the next special viewing (see below for details) John Brown in his studio.

Recently John loaned two of his large sculptures for a City office scene in Steven Spielberg's latest movie Ready Player One- a science fiction adventure being filmed at various locations in Britain and due for release in March 2018.

The two large works, 'Joy of the Family' and 'Pas de Deux' (pictured) can be seen on John's excellent website.  Now in his 85th year, John is still very much a working sculptor.

He trained at Hornsey College of Art and Hampstead Garden Suburb Institute.

He works in a range of materials and produces sculptures that are life-size or larger and also smaller works more suitable for display indoors in a typical home.

Many of his large sculptures are commissioned for display in corporate or public buildings.

For example John's pieces can be found in The Prudential Insurance Company's art collection, in Harpenden town centre and at Barnet Hospital.

His sculptures have also been bought by clients in China, Japan and The United States.

John Brown says he creates his contemporary sculptures based on the human figure, simplified and abstracted, and expressing emotions and relationships.

When a potential owner trawls his website or visits his elegant studio gallery they have the chance to order or buy a piece of existing sculpture or commission something new.

A fascination with forms of dance – from classical ballet to modern, contemporary and ballroom including the TV show 'Strictly Come Dancing', provide inspiration for many of his works.

Special commissions, however, are often created in conjunction with the client who might be an individual, a company or public body and sometimes he works with an architect or interior designer.

The website: www.johnbrown-sculptor.co.uk shows a wide selection of sculptures and extensive information about John Brown, his creations, clients, commissions and also lists the exhibitions in the area and around the UK at which he regularly shows his work.

If you wish to register your name and email address to receive an invitation to John Brown's next show contact: Email This email address is being protected from spambots. You need JavaScript enabled to view it.

Pieces by Mr Brown were recently on view at his studio in Wood Street, and further viewings are to be held in September.

Barnet Society member Phyllis Oberman was hired at the age of 18 as a reporter at the London office of The Ceylon Times in 1952.

She joined the National Union of Journalists the following year, and remains a life member.

She is a regular contributor to the crafts and hobbies section of the website, www.sixtyplusurfers.co.uk

Ms Oberman recently recalled her glamorous life as a young journalist in Fleet Street in the 1950s.

“I danced with prime ministers and confronted fraudsters, was a regular at the Queen’s garden parties and in the parliamentary press gallery, mingled backstage at Miss World and broke a drug-smuggling story.

“On Fleet Street I rubbed shoulders with witty Leslie Thomas, a reporter before he became a bestselling author, and Randolph Churchill, loquacious and red-faced, in the legendary El Vino’s bar.

“I interviewed Alec Douglas-Home, dry but informative, when he was Commonwealth Secretary, and reported on parliamentary debates from an awe-inspiring position above the chamber.”

More in this category: « Green Belt prices soar Free to speak her mind? »