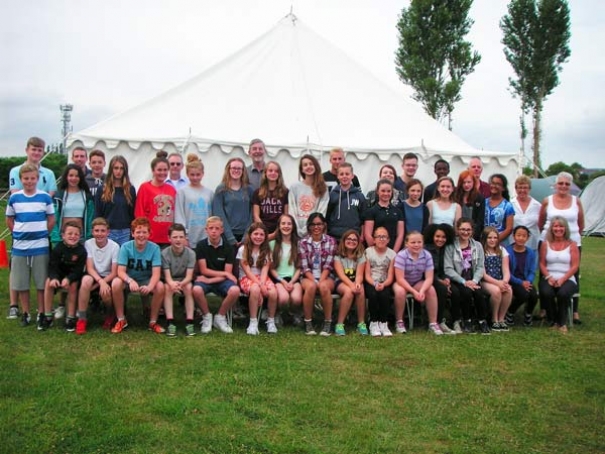 Ewen Hall, at the Barnet United Reform Church in Wood Street, was packed out once again for this year’s summer jumble sale (27.6.2015) which attracted crowds of bargain hunters.

Over the years hundreds of local boys and girls have been members of the brigade, and many of them have enjoyed one of the annual camps. This year’s expedition is to Great Yarmouth in July. 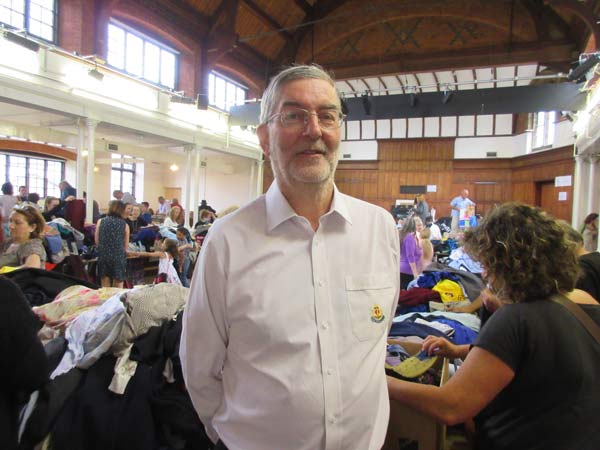 Much of the impetus behind the brigade’s success is down to the commitment of the indefatigable Alan King, who has been the head leader for almost 40 years, and who was once again in command during the collection, sorting and sale of the bags and boxes of jumble donated by local residents.

The three annual jumble sales each make around £1,000, vital funding for a brigade that numbers 150 boys and girls aged from five to 15. Local householders do their best to help, and many look forward to the regular appeals for jumble as an opportunity to donate unwanted items to a worthy cause.

Mr King says that running a jumble sale is hard work and needs a tremendous amount of effort.

“Not many jumble sales are held these days because they are so hard to organise, and it is difficult to get the jumble as there is so much competition from charity shops. But we are lucky because our teenagers in the brigade can go out collecting bags and boxes from the households in the 30 or so local streets which we leaflet in advance.

“Luckily very few local organisations can match what we do when it comes to collecting jumble, and on the day we can rely on lots of helpers to man the stalls. We usually get well over a dozen parents volunteering to help the leaders.

“We get so many unwanted items donated that we have to have a skip to take away unsold bric-a-brac, but dealers come along to buy all the unsold books, clothes and shoes, so we try to raise as much as we can.”

Mr King, a teacher at Broadfields School in Edgware, is a member of Barnet United Reform Church and has been with the brigade for over 40 years, first as a leader and then after three years becoming head leader.

“Of course I used to be known as the captain, but nowadays the Boys’ Brigade steers clear of military terminology like that. Looking back on over 40 years with 1st Barnet, I would have to say I do have a great sense of achievement. I do like running the brigade and it is such rewarding work.

Mr King said the jumble sale proceeds did so much to help subsidise the brigade’s running costs, and help with the cost of equipment needed for the annual camp, which had always been one of the highlights of the year.

“Nationally the Boys’ Brigade started holding camps long before the Boy Scouts, so we have lots of experience. This year the 1st Barnet are taking 30 boys and girls for a week’s camp in Great Yarmouth in the last week of July.

The annual camp is something we all look forward to, and we alternate between Great Yarmouth, Skegness and Chichester – and Skeggie is probably the favourite.

“The juniors, aged eight to ten, have a weekend camp with the Boys’ Brigade at Felden Lodge, Hemel Hempstead, and that is just as popular.”