From inspiration to realisation: the greening of Barnet Hill 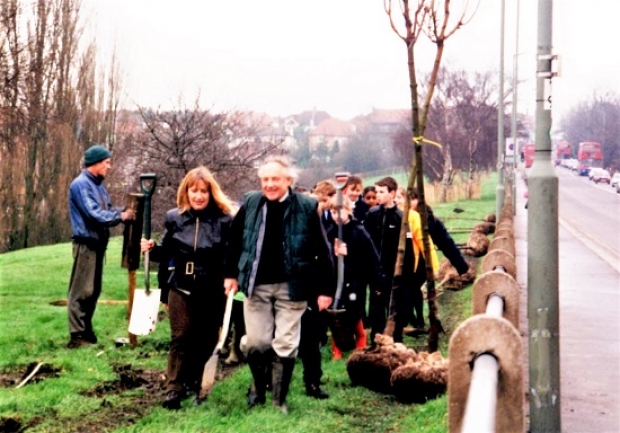 David Lee with volunteers hard at work in 1999 planting London planes and Norway maples on Barnet Hill
At the close of 2020, after one of the bleakest years for High Barnet in recent living memory, the long wait for spring should be relieved by the recognition that the local community enjoys perhaps the greenest surroundings of any comparable north London community.

Forty years elapsed between inspiration and realisation – and the start of what has become half a lifetime’s work for David Lee, the celebrated tree planter of High Barnet, whose lasting achievement has been the greening of Barnet Hill.

Lee’s Trees – a row of splendid London Planes and Norway Maples – now march upwards from the railway bridge at Underhill to the junction with Milton Avenue, a green gateway to High Barnet. 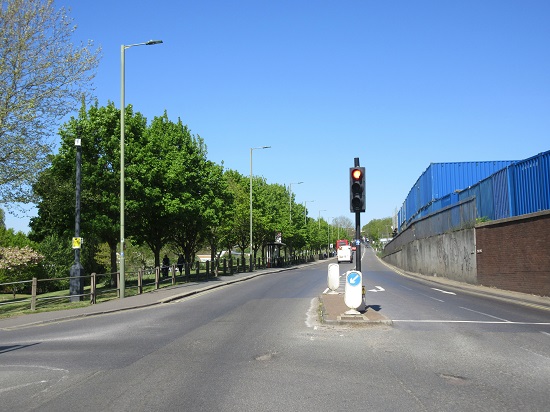 They form part of his concept for “a green chain” – all the way up from the railway bridge, along the High Street, and on to Hadley – so that wherever you are, walking or driving, there is always a tree to be seen, either in front of you or behind you.
The existing trees, including those in front of Queen Elizabeth’s Girls’ School, High Barnet tube station and the parish church of St John the Baptist, are “integral and vital” to this tree-lined route.

David, who celebrated his 90th birthday in March, was a young architectural student in 1956 when for the first time he walked down Barnet Hill having just left High Barnet tube station, heading towards a friend’s house in Station Road, New Barnet.
“I have to admit, my first impression of High Barnet was that the main approach to the town was most unwelcoming.
“As I walked down this long, sloping busy main road all I could see was the tube line and the old railway goods yard to the left. To the right there was this bleak, windswept bank that went on for ever without a tree in sight.”

Such was the impact of that first visit that it never left him and was still fresh in his mind when he eventually settled in High Barnet in 1982 and Barnet Hill seemed just as exposed as he remembered it in the 1950s. 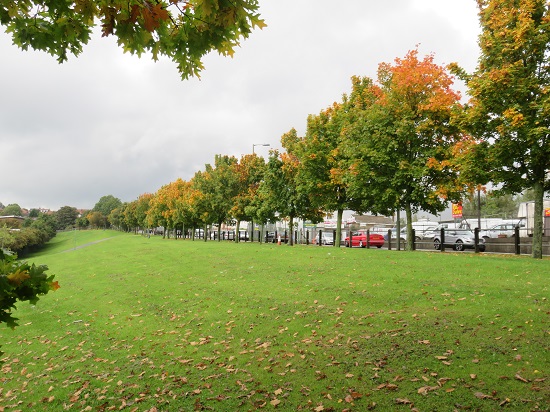 David is the first to acknowledge the ingenuity of highways commissioners who in the 1820s rerouted the hill and straightened it by taking soil from nearby fields to build a causeway so as to ease the passage of the 150 stage coaches that travelled daily through Barnet along the Great North Road.
In subsequent years trams and later trolley buses benefited from those early steps to ease the gradient.
“Back then there was not any tree planting alongside the newly built road, and I resolved it was high time we put that right.
“Forty years on from my initial thought that trees would improve the vista, the first saplings went in.
“All told we planted nearly 50 trees in 1999, mainly London Planes and Norway Maples. Twenty years later they are coming along very nicely, and they have transformed the approach to High Barnet.”

David, later a qualified architect and landscape architect, joined the Barnet Society in 1995 and was soon elected to the committee.
His first task was to advise on the location and contents of two plantations of trees on the south-west side of Whitings Hill, tucked away between Quinta Drive and Mays Lane.

Barnet Council had created a new open space in what was formerly scruffy pastureland and local groups were invited to plant trees as part of the Watling Chase Community Forest project. The Barnet Society joined in as a way of celebrating its fiftieth anniversary. 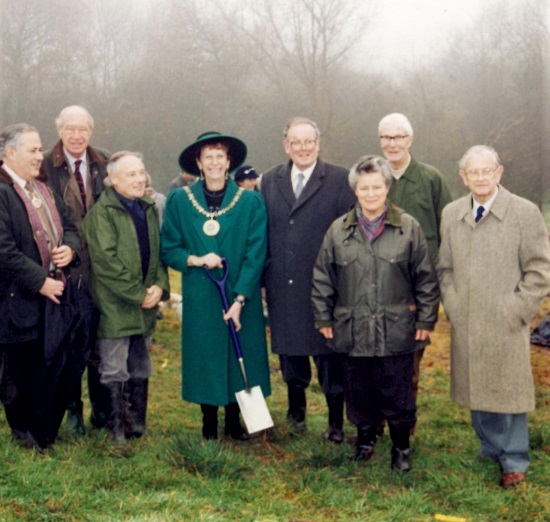 It was a foggy day for the ceremonial planting in December 1995 so there was no chance for Sydney Chapman, Chipping Barnet MP and society president, and Suzette Palmer, Mayor of Barnet, and other guests to admire the view from the top of Whitings Hill.

David had taken great care to respect the committee’s wishes to select only native species and every year, as summer ends, the society’s two plantations, now resplendent with maturing trees, present a vibrant display of autumn colours.

Three more oaks were planted in December 1999 in honour of the society’s founders, one of the many projects in Barnet to celebrate the millennium.
Beside the oaks, which it was hoped would eventually provide shade, the society paid for the erection of a bench (in honour of Derrick Bridges, the secretary), known as the secretaries’ bench and sadly long since vandalised with only the concrete base remaining. 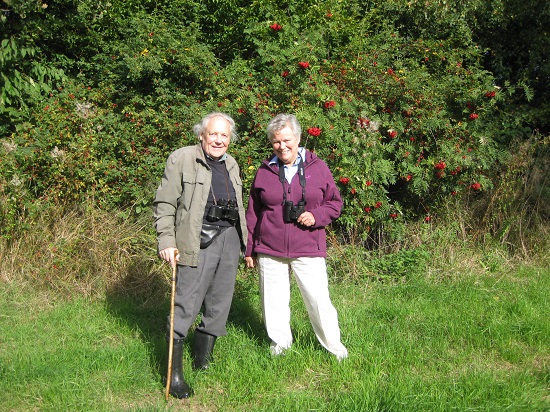 Spurred on by the completion of the Whitings Hill plantations, David (seen here with fellow vice president Jenny Remfry) became ever more determined to tackle Barnet Hill, especially as he was reminded regularly, especially in winter, of its windswept and uninviting aspect whenever he crossed the road from Milton Avenue to the tube station.
As the new chairman of the society’s newly formed planning and environment committee, he was appointed the society’s representative on the Chipping Barnet Town Centre Forum. This gave him the chance to propose the tree planting scheme which Barnet Council agreed to immediately in 1998 and commenced on site in January 1999.
In addition to the planting of the London Planes and Norway Maples at the crest of the grass bank on Barnet Hill, other trees were chosen for sites across Underhill, and on the pavement on both sides of the High Street up towards the parish church. There was also additional planting in the church yard beside Church Passage (unfortunately not approved by the Church Commissioners). 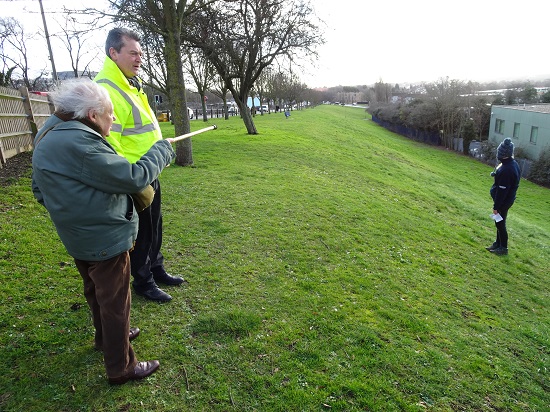 David has spent the last two decades devising other smaller-scale schemes to reinforce the original work and doing all he can to ensure replanting if trees get diseased or are damaged or removed due to road widening or vandalism.
Perhaps the most troubled area has been the lower end of the High Street. Norway Maples planted outside the old courthouse were removed during road widening and several trees on the other side of the High Street have had to be replaced after either having been vandalised or uprooted in road accidents.
David was sceptical of the recent pavement widening and tree planting in the upper High Street, being in favour of more modest arrangements. Nevertheless, he applauds the green linkage through the town centre with its boost to his original ideas.

Barnet Hill has remained a major pre-occupation on David’s to-do list. Unfortunately, extensive road improvements are planned at the junction with Underhill and Fairfield Way (consequent upon the opening of Ark Academy) which will require the felling of several of the original Lee’s Trees.
Once the road works have been completed, there will be a pressing need for tree planting around the widened Barnet Hill junction and in front of the six new houses that have been built on the site of the Old Red Lion public house.

David is proposing to prepare a detailed plan for Barnet Council, listing both the siting for each individual tree and the species to be planted.
Recently more trees have been added to the grass bank that slopes down from Barnet Hill towards St Catherine’s Primary School and Vale Drive Clinic.

A field hedge of Hawthorns is being planted south from Milton Avenue to join up with the existing Hawthorns alongside the school boundary. 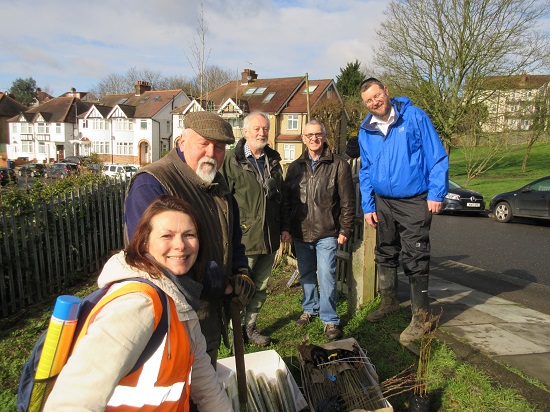 A start on this was made in March 2020 when fifty hawthorn whips were planted alongside the clinic boundary by a volunteer working party which was marshalled as a result of a three-way effort between the Jewish Kisharon charity, the Barnet Society and Barnet Council (...and socially-distanced groups of volunteers hope to plant more hawthorns in January 2021).
David’s original planting scheme included additional trees on the grass bank north of Milton Avenue behind the Barnet Hill bus stop. These are awaited in due course.
A part of David’s greatest cause for concern is the future protection and wellbeing of the ten London Planes in front of Queen Elizabeth’s Girls’ School, at the junction of Barnet Hill and Meadway, and the many trees in the wooded area between Meadway and High Barnet tube station.

To David’s disappointment his attempt to get a tree preservation order placed on the QE Girls’ plane trees was rejected around 2002, but he still hopes the decision can be reversed.
He has taken some comfort from the revised proposals for housing development around the tube station and car park and the abandoning of an earlier plan to build multi-storey blocks of flats facing on to Meadway as well as alongside Barnet Hill.

Transport for London and their developers Taylor Wimpey were due to submit a joint application for 292 flats in six tower blocks in mid-June but this was paused in the autumn of 2020 because of TfL’s financial difficulties in the wake of the Covid.19 pandemic.
David’s concerns are first that the bulk of the existing woodland is retained, protected, and rejuvenated, and secondly that the Barnet Society is included in discussions about any new planting to screen the redevelopment.
David proposed a proper management plan for the existing woodland back in 2002 but London Transport did not respond.
“There are some fine specimens, such as Ash, just above the tube station, but many of the trees are seriously troubled by Ivy growth and do need attention.” 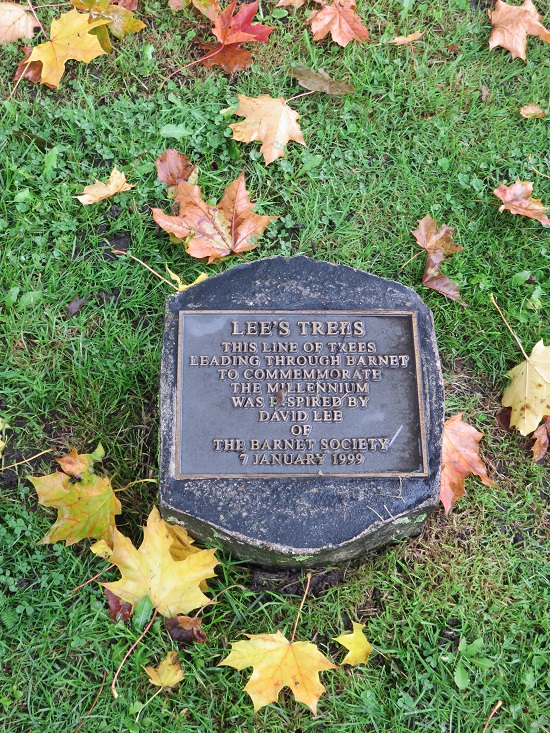 David remained chair of the society’s planning and environment committee until 2010 and is now a long serving vice president.
Despite failing eyesight, and without the advantages of modern techniques such as computer aided design, he is still producing detailed designs to fill in and complete a green highway that had its origins in the musings of an architectural student who happened to stroll down Barnet Hill in the 1950s.