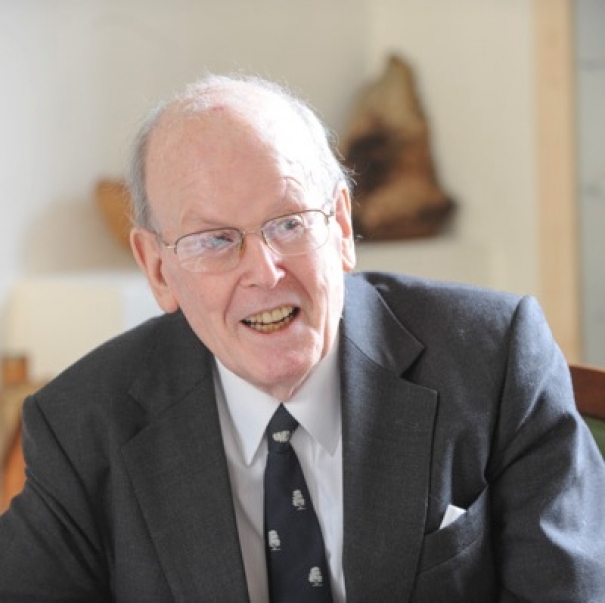 Sir Sydney Chapman
Family, friends and constituents have been paying tribute to Sir Sydney Chapman, the former Conservative MP for Chipping Barnet for just over a quarter of a century, who died in early October. His funeral was held (22.10.2014) at St Mary’s Church, Lower Heyford, Oxfordshire, where he had lived for some years since his retirement from politics.

Sir Sydney, who was MP for Chipping Barnet from 1979 until 2005, was a long-standing member of the Barnet Society and a strong supporter of many groups and organisations within the constituency.

His family asked for donations instead of flowers to go to either Cherry Lodge Cancer Care in Union Street, Barnet, or to Cancer Research UK.

Sir Sydney was first elected as an MP for Birmingham Handsworth in 1970 but lost his seat in the 1974 general election. He was elected MP for Chipping Barnet on the retirement of the former Conservative Chancellor of the Exchequer, Reginald Maudling, who had been the constituency MP for almost 30 years.

An architect by profession, Sir Sydney became a member of the Council of the Royal Institute of British Architects and received widespread acclaim for his environmental initiative “Plant a Tree in ‘73” which was one of the first popular environmentalist movements in Britain.

He was a great defender of the Green Belt around Barnet, Totteridge, Arkley and Hadley and he took a keen interest in the work of the Barnet Society in promoting and defending local conservation areas and woodland.
An amusing legacy from one of his most successful initiatives is a good question for a local quiz night: which London Borough has the highest horse population? The answer: Barnet.

I acquired this useful statistic when he began his campaign in the 1980s for a footbridge over the Barnet by-pass beside its junction with Galley Lane.

After a run of accidents involving horse riders trying to cross what was then a three-lane road, Sir Sydney demanded that once the A1 became a dual carriageway south of Junction 23 on the M25 there should be a bridge not just for pedestrians but also one large enough to accommodate horses and cyclists.

His persistence paid off and the footbridge and bridleway over the A1 gives riders from the stables in Galley Lane, Arkley Lane and elsewhere access to the countryside around Ridge and South Mimms.

Perhaps the most fitting tribute would have been to have named the bridge after him. There is “Sydney Chapman Way” on Hadley Green (formerly Hadley Green Road) but personally I think the bridge was one of his lasting achievements; it does ensure the safety of walkers, horse riders and cyclists out enjoying the Green Belt and his foresight should be recognised.

My fondest memory, as a former BBC political correspondent at Westminster, is from the years he served diligently in the whips’ office of John Major’s government and had the unenviable task of keeping troublesome Conservative Euro-sceptic MPs in line and trying to persuade them against staging yet another rebellion against their embattled Prime Minister.

His reward was to be appointed Vice-chamberlain in the whips’ office and to take on the task of writing a note to the Queen each evening to report on the day’s proceedings in Parliament. He took great delight in including amusing snippets of information, which only served to underline his wry sense of humour.

Sir Sydney was no rent-a-quote MP and disliked the grandstanding of some his parliamentary colleagues.

Sir Sydney was no rent-a-quote MP and disliked the grandstanding of some his parliamentary colleagues.

Indeed he used to say to me that he made a point of not answering journalists’ questions when they tried to trap him into making provocative comments on divisive issues such as unemployment or the state of the economy.

He much preferred briefing local newspapers on his activities as a constituency MP supporting local groups and initiatives.

Sir Sydney’s refusal to get drawn into political dog-fights paid off in the 1997 general election, when Tony Blair’s landslide victory unseated Conservative MPs from a large swathe of north London and south Hertfordshire.

He held his seat by the narrow margin of 1,035 votes and next day the election maps on television and in the newspapers showed that Chipping Barnet was the one remaining blue spot in what was otherwise a sea of red.

Other local Conservative MPs, such as Michael Portillo in Enfield Southgate, had been targeted by the left and Sir Sydney’s low profile probably helped him save his seat.

I often thought of him during Lord Justice Leveson’s inquiry into phone hacking and the subsequent court cases involving journalists caught paying police and prison officers for illicit information.

As a newly appointed government whip, he was the victim of an unauthorised tip-off in August 1992.

He was stopped by the police in Wood Street and breathalysed; the Sun had the story next day. A blood test subsequently proved negative but that was no longer news.

The chief superintendent at High Barnet Police Station traced the tip-off to an unidentified source at the traffic police depot in North Finchley.

Sir Sydney hated the publicity and asked for my advice: should he complain to the Sun? I advised against it, warning that reporters on the tabloid newspapers might cause him further discomfort if he tried to make a fuss as his role in the whips’ office had put him in a vulnerable position.

He thanked me for my words of caution and the story was soon forgotten but it only served to highlight the ongoing love-hate relationship between politicians and the news media.

As a political journalist and resident of High Barnet throughout the 26 years he represented Chipping Barnet, I know from neighbours and friends that Sir Sydney’s reputation as a hard-working and conscientious constituency MP was regarded by so many as second to none.

More in this category: « The bees knees Skating – a Christmas treat »