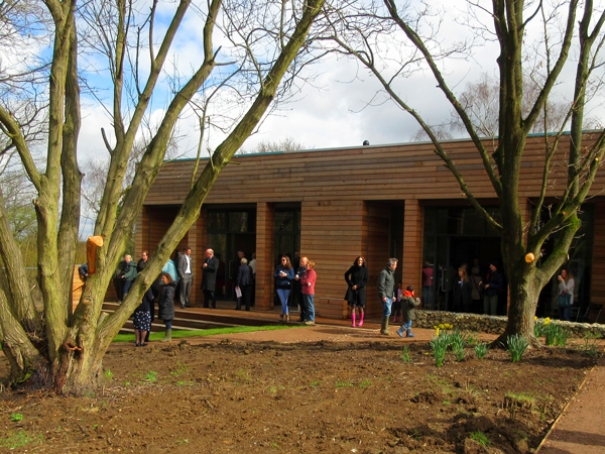 A long red tape held by children across decking at the front of the cedar-clad building was cut in half by Mrs Hulme with a massive of pair red scissors – a magic moment for volunteers who had worked for months to prepare the reserve for its big day. 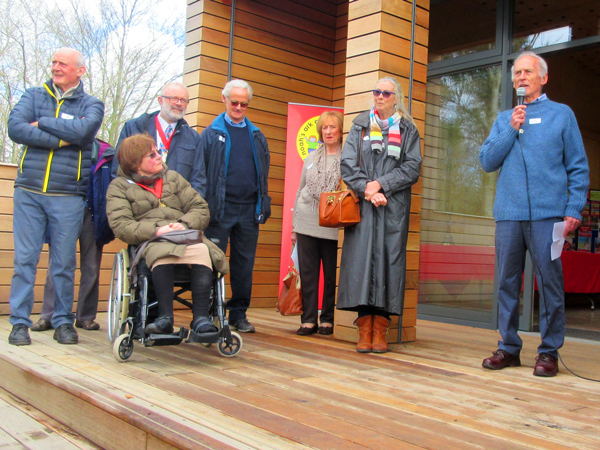 The opening of the new centre will allow work to start next year on the construction of state-of-the-art care facilities for the Noah’s Ark Children’s Hospice, which now controls the eight-acre reserve.

Under a deal brokered by Barnet Council, Noah’s Ark took over responsibility for the Byng Road reserve and has permission to build a new six-bed complex on the site to provide north London’s first children’s hospice.

In return there is a requirement for the nature reserve to be kept available for community use, and as a first step Noah’s Ark has built new premises for the use of the Friends of the Barnet Environment Centre – a development made possible by a £750,000 donation to Noah’s Ark by the Hadley Trust.

They both paid tribute to the generosity of the Hadley Trust and spoke of their delight that the two charities were working together to improve and maintain an important community asset and provide a hospice that would become a hub for children’s palliative care services across north London.

Its eco-friendly features included a living roof planted with sedum; a large open room looking out on to the garden and nature reserve; and a separate class room, together with cloak room, toilets and kitchen.

“We take up to 30 children on three days a week on school visits to look round the reserve.

We were fully booked for the weeks before Easter and now, with offer of brand new facilities, we are booking up really fast for the summer term.” 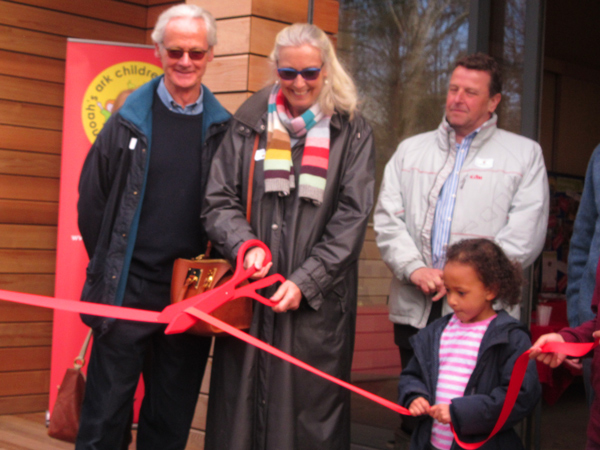 Byng Road environment centre has been hosting school visits for the last 40 years, but Barnet Council withdrew financial support 14 years ago, which left the friends of the centre having to rely on volunteers to maintain the nature reserve.

When the eight-acre reserve was put up for disposal by the council, Noah’s Ark obtained a long term lease which stipulated that provision should be made for the environment centre’s educational work to continue.

Mr Watkins said the aim was to start work on the hospice next year, serving children across north and central London. A start date will depend on fund raising.

Mr Michael McInerney, chair of the Noah’s Ark trustees, said the opening of the new centre meant it was now possible to prepare the site for the hospice. 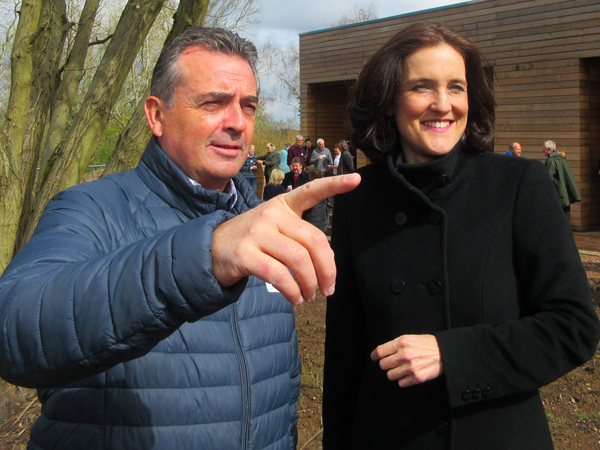 During the summer there will be further site clearance, the removal of spoil and rubble heaps, and the demolition of derelict buildings, in preparation for construction work next year.

“No other hospice in London is as fortunate as we will be, sited beside an eight-acre nature reserve.

Here we have a site much loved by the local community, well used by local school children.

There could hardly be a better environment for the parents and families of children undergoing palliative care, and now we have a wonderful new centre allowing us to work together.”

The importance of the planned Noah’s Ark hospice to north London was underlined by an impressive line-up of dignitaries for the official opening, including the Deputy Mayor of Barnet, Alison Cornelius, the Mayor of Camden, Larraine Revah, the Mayor of Haringey, Jennifer Mann, and the Mayor of Islington, Richard Greening.