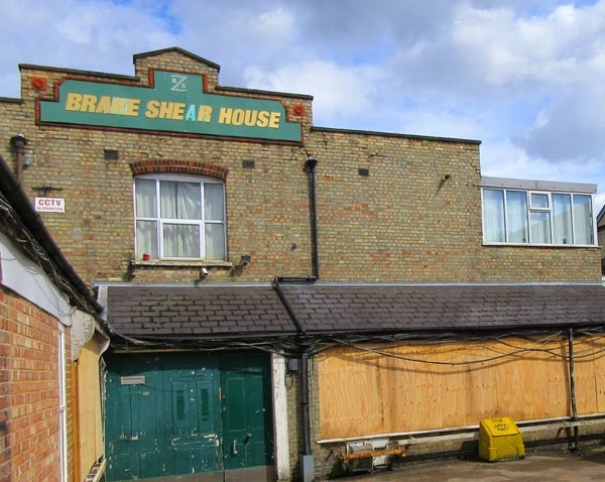 Brake Shear House development delayed and possible changes to the agreed planning consent
Barnet High Street’s historic Brake Shear House complex, which is boarded up ready for demolition, has gained a temporary reprieve, and former tenants of workshops and offices are being offered fresh short-term leases.

Shanly Homes, which purchased the site last month from another developer, Wrenbridge, is now considering whether to proceed with the planning permission granted last year for the construction of 32 flats, eight semi-detached houses, and workspace for 40 or more employees.

One of the businesses considering whether to return is a recording studio – one of two within Brake Shear House – which in years gone by was used by Elton John, the Spice Girls and the punk rock band, the Buzzcocks.
Short-term leases of a year, with perhaps the option of a second year, are now being offered by Shanly Homes while it considers its options.

Wrenbridge, which consulted the Barnet Society and other groups about its plans to redevelop the site, announced last month that it had decided to sell the site rather than build out the scheme as planned.

One reason cited locally for Wrenbridge pulling out – and for the delay in redeveloping the site – is that it failed soil tests which showed that the site was contaminated with chemicals and heavy metals.

Brake Shear House and the surrounding workshops date back to the Victorian era and early uses of the site were for a gas works, photo-engravers and more recently car repair workshops.

A spokesman for Shanly Home denied that the site was contaminated, but acknowledged that remedial action was necessary, and that some of the soil on the site contained residues such as oil and other matter, and would have to be removed.

“It is very rare not to find that sites that housed historic industrial processes do require remedial action. We have acquired the site in the full knowledge of the soil tests.

“We intend now to carry out further investigations into the site and assess the existing planning consent. We will be considering whether we want to seek to revise the scheme that currently has approval.

“We have noted that the current plan does include workshop and commercial space, and that will be another issue to be taken into consideration.

“Shanly Home is an award-winning residential developer and it is our intention to develop the site in the long term.”

...We will be considering whether we want to seek to revise the scheme that currently has approval.

The approved scheme includes eight semi-detached family homes with gardens, 32 apartments in a three-story block of flats, together with 656 square metres of workspace providing room for more than 40 employees.

Some of the workshops were to be provided at affordable rents for start-ups and charities.

The original aim had been to start demolition of the site in January this year – but as the weeks went by it became clear that the redevelopment had stalled and that Wrenbridge were looking for a buyer.

There was an outcry in September 2015 when the 30 or so small firms with premises in Brake Shear House and its outhouses first learned that their leases were being terminated.

They complained about the lack of affordable workspace and that jobs were being lost to make way for flats – a plea that is being repeated at Meadow Works, on the A1000, midway between High Barnet and Whetsone, where  plans to build two blocks containing 78 flats could displace businesses employing up to 40 people in another well-known group of workshops and light industrial premises.