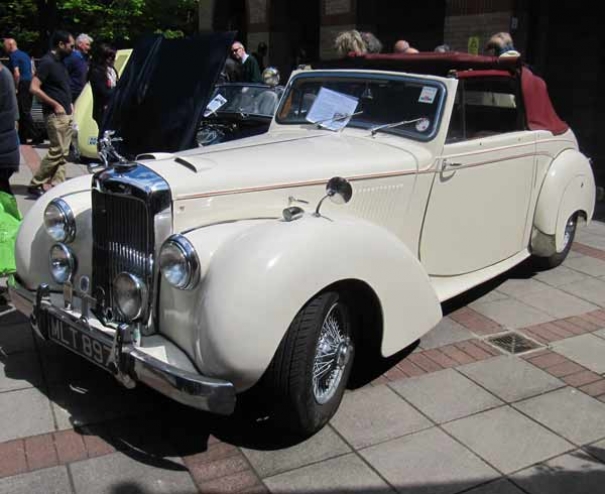 John Barnett’s Alvis Grey Lady from the early 1950s was one of the elegant cars on display at the 2016 show
Cameras, smart phones and tablets will be out in force to capture images of the many much-admired and much-loved models that will be on display at the fourth annual Barnet Market classic car show on Saturday 10 June.

Around 35 cars, plus some historic motorbikes, are expected to take part in a drive past up Barnet Hill, and then along the High Street, to their designated positions in the market, around the bandstand and inside the Spires shopping centre.

Barnet Classic Car Club stalwart Chris Nightingale – and organiser for Friends of Barnet market – is promising a display that will keep the cameras clicking from the moment the cars assemble.

The star of the show will be Bertie, Paul and Pina Griffin’s 1923 Bentley. Joining Bertie inside the Spires will be a 1930s Riley sports car. 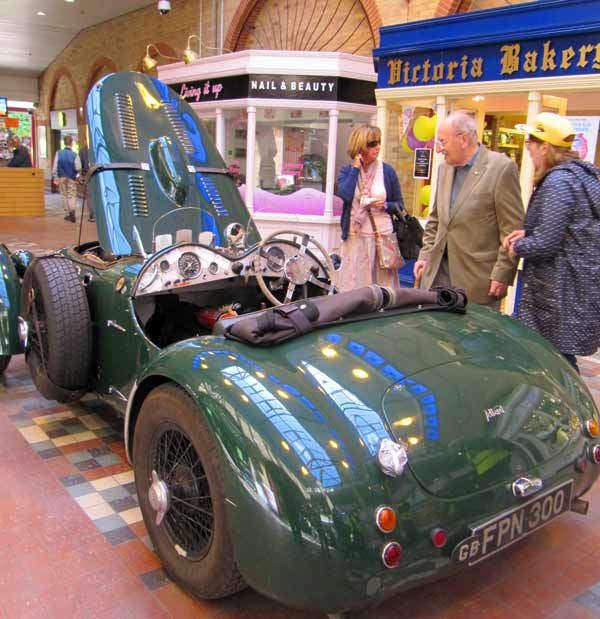 Mr Nightingale says he never ceases to be amazed by the interest created by classic cars and their appeal across the age range.

“For the older generation, this fascination relates to cars they would like to have owned – or perhaps did own – when they were young.

“Even for people who aren’t interested in the cars themselves, just seeing them brings back memories.

“At one classic car show, I remember one lady asking to get into the back of a 1950s Ford Popular. There were tears in her eyes because the last time she’d sat on the back seat was when she was a little girl going away on family holidays.”

Mr Nightingale and his wife Diane own a 1961 Mini Cooper, and at shows they are constantly approached by eager enthusiasts.

“What puzzles me is why youngsters are fascinated by classic cars. We are continually being asked by young people if they can sit in the driver’s seat and have their photos taken – always our pleasure, of course.”

Perhaps one of the best calculations for purchasing classic and vintage cars is that they are considered to be one of the safest investments, but whatever their value they remain cherished possessions.

On display inside the Spires at last year’s show was Tim Baker’s 1951 Allard J2 replica which he has regularly competed with in historic car competitions. Allards were particularly prominent in the early 1950s. One finished third in the 1951 Le Mans 24-hour race and a saloon version won the Monte Carlo rally in 1950.

An Alvis Grey Lady from the early 1950s, owned by John Barnett, was on display last year at the bandstand. Alvis cars were generally known for their elegance rather than their performance.

Somewhat unexpectedly the name Alvis is made up from Al (as they mostly had aluminium bodies) and vis, being the Latin for strength/force.

Cars start driving up Barnet Hill, one at a time, from 10.35am on Saturday 10 June, and then along the High Street to the St Albans Road entrance to the market, where they will be on show from 11am to 2pm.  A talented local duo, Down 2 Earth, will provide music on the St Albans Road site from midday onwards.

The 4th Barnet Market Classic Car Show will be featuring more cars than before, not only on the St Albans Road market site, but also on the area around the bandstand next to Waitrose.   In addition, Bertie (1923 Bentley) and a 1930s Riley sports car will be on view within The Spires shopping centre itself.   The Show will take place on Saturday, 10th June, and will start at around 10.35 am with the cars driving one at a time up Barnet Hill and along the High Street before taking up positions on their designated sites.   The cars will be on show from 11.00 am until 2.00 pm.    A very talented local duo, Down 2 Earth, will provide music on the St Albans Road site from midday onwards.