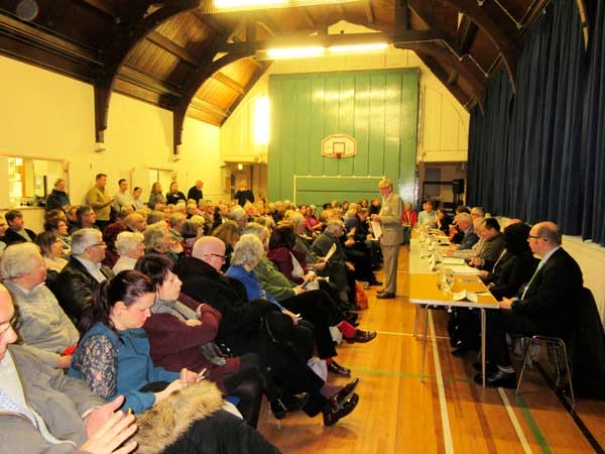 Robin Bishop, chair of Barnet Society, opens the election hustings.
A deep, sometimes noisy divide opened up at the Barnet Society’s election hustings over a wide range of contentious local issues including the need for affordable housing, concern over an increasing number of empty homes, the outsourcing of services to Capita and the demand for free town centre parking.

Labour candidates made pledge after pledge as to how Barnet Council’s policies would change under Labour control – only to be challenged by the Conservatives who are pitching to be re-elected for a fifth term, and who argued that such ideas would be unworkable and too costly to implement.

There was standing room only when over 120 local residents crowded in to the Pennefather Hall in St Albans Road (22.2.2018) to question an impressive line-up of 13 candidates – five from Labour, three Conservatives, two Liberal Democrats, two Greens, and one Independent.

In staging the open forum, the Society hoped to stimulate debate before the London-wide borough council elections on Thursday 3 May. After a welcome from the Society’s chair, Robin Bishop, the questioners piled in.

By far the hottest topic of the evening was housing and there were cheers and jeers as the two leading protagonists, Councillor Paul Edwards (Labour Underhill) and Councillor David Longstaff (Conservative High Barnet) went head to head.

Councillor Edwards accused the controlling Conservative group on Barnet Council of having caved in time and again to property developers, and of having utterly failed to secure sufficient social and affordable housing in new developments.

If Labour won control the council would insist that all new estates had at least 40 to 50 per cent affordable housing. Rents for new social housing would be 30 per cent of market value.

If developers were not prepared to agree, they would be refused planning approval. Another Labour manifesto pledge would be to build 800 council houses across the borough over the next four years to replace the social housing lost at Dollis Valley and in other redevelopments.

Simon Cohen (Liberal Democrat, High Barnet) called on the council to specify a far higher target for affordable homes and social housing. “Barnet should be leading by example.”

In her response, Lara Akindiji (Conservative Underhill) said the Conservative group recognised the need for more social housing and Barnet Council was “catching up” fast on the requirement for affordable housing.

Councillor Longstaff hit back directly over complaints about the prices being charged for new properties on the Elmbank estate. This land had been sold for redevelopment by the NHS.

The council had made a stand in opposing new development on green belt land and he could give an assurance that if re-elected the Conservatives would “defend the green belt to the end.”

Obi-Raymundo Obedencio (Green Party) promised equally firm support for the defence of the green belt, as did Labour, but while there was agreement about the scandal of houses lying empty, the parties offered different solutions. 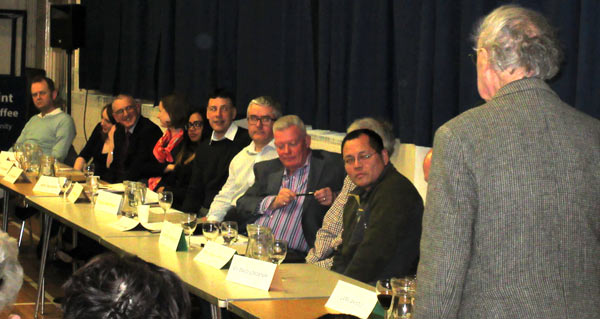 When the Greens declared that the latest count showed there were 3,400 empty houses across the borough, Councillor Longstaff explained that the council was looking to increase the council tax levied on empty properties.

Barnet Council could do more to help those ready to self-build and if necessary, the council should construct pre-fabricated homes, initiatives that also had the support of the Greens.

Amy Trevethan (Labour, High Barnet) deplored the impact of the right to buy policy. A third of the homes sold off by Barnet Council were now owned by landlords who were renting them out.

Labour believed that a pause in the entitlement to right to buy would be helpful, a proposal that was greeted with cheers from the hall.

Concern over the outsourcing of council services to Capita produced fresh acrimony. Councillor Edwards promised that under Labour services would be brought back in house where possible, and the employees would receive the London living wage.

As a first step Labour would re-examine the terms of Barnet Council’s contract with Capita.

“We want to see what the Capita contract actually says...We want to ensure that what we are paying for gets done...and our long-term aim is to be paying for local services provided by a local workforce.”

Duncan McDonald (Liberal Democrat, High Barnet) condemned the huge democratic deficit that had built up over outsourcing services to Capita.

“Are we stuck with Capita? It would cost a lot to bring services back in house. This is a massive problem for Barnet bearing in mind what we have seen with the collapse of Carillion.”

Mr McDonald urged the council to restore local services. “What Barnet’s Conservatives have done to our libraries is criminal. Children are now being barred because children aren’t allowed entry on their own because the libraries aren’t properly staffed.”

Councillor Jess Brayne (Labour, Underhill) promised Labour would extend the hours of core staff in the libraries in order to extend opening hours. “We want to see our libraries serving as hubs of the community once again.”

Amid further heated exchanges in defending the Conservatives’ record, Councillor Longstaff argued that outsourcing to Capita was saving Barnet Council £1 million a month.

“Labour think they can just bring these services back in house, but to do so will add four per cent to council tax – that’s what’ll be needed to replace the current saving of £12 million a year.”

Councillor Longstaff defended the Conservatives’ record on libraries. Two new libraries had been built in the borough and the staffed hours at Chipping Barnet were about to increase and it had “more books than ever before.”

There was another cross-party confrontation after Councillor Brayne gave a pledge that if Labour won control in May, Barnet would introduce a 30-minute period of free parking in shopping centres across the borough.

“Within a year there will be 30 minutes of free parking in High Barnet’s High Street.”

Councillor Longstaff feared the creation of extra free parking spaces would only increase pollution in the High Street as drivers looked for somewhere to stop. There was already an hour’s free parking in the Moxon Street car park and a two-hour free period on Hadley Green.

Charles Wicksteed (Green Party) doubted whether free parking was the answer when it came to reviving the High Street. “Making it free doesn’t necessarily increase the number of people parking their cars and going shopping. The Spires car park is half empty.”

The Greens also had their doubts about the plan to build out the pavement in part of the High Street. Mr Wicksteed feared that there would not be room for ambulances to pass in an emergency.

But Independent Ken Rowland said he was a strong supporter of the pavement build-out which would help speed up the flow of traffic, and that would help create a healthier High Street for shoppers.

More in this category: « Plea to restore drinking fountain Why no upper deck for Barnet Hospital car park? »