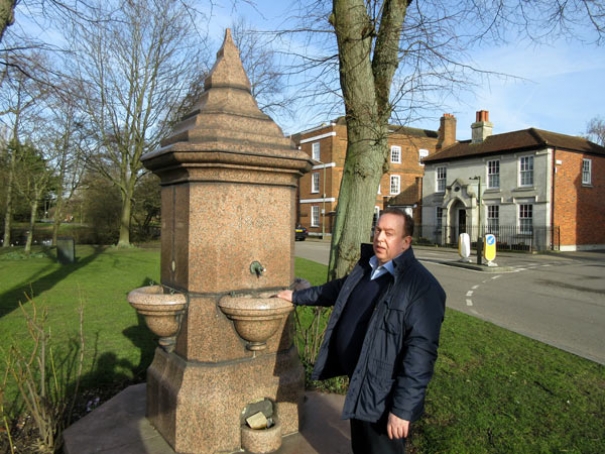 Peter Wanders is leading a campaign to get water reconnected to the historic Hadley Green drinking fountain.
A campaign has been launched to restore to full use Hadley Green’s historic water fountain, an ornate structure built of pink marble, and once resplendent with a set of brass drinking cups.

Erected in 1885 at the southern end of the green, just by the duck pond, at the junction with Barnet High Street, the fountain is in a sorry state of disrepair, having lost even the plaque that commemorated its installation.

Within two days of launching his campaign on Facebook, Peter Wanders had over 140 messages of support for his bid to persuade the relevant authorities to reconnect the fountain to the water supply so that once again people can get a drink of water or refill their bottles.

The fountain was listed in 1986 as being of architectural and historic interest, but Mr Wanders is having difficulty tracing who might be responsible for its upkeep.

“If the Mayor of London, Sadiq Khan, is really serious about his efforts to reduce the use of throwaway plastic bottles, then restoring the drinking fountain would be a great gesture.

“Shops and restaurants are all being urged to offer customers the chance to refill water bottles, in order to reduce plastic waste, and local authorities need to play their part too.”

If the Mayor of London, Sadiq Khan, is really serious about his efforts to reduce the use of throwaway plastic bottles, then restoring the drinking fountain would be a great gesture.

Mr Wanders, proprietor of the nearby Wanders shoe shop, said Hadley Green is a popular attraction for visitors and people who walk to and from East Barnet through King George’s Fields.

“There could hardly be a more opportune moment to restore the fountain: there are bound to many more passers-by once the Battle of Barnet visitor trail is up and running, and a working drinking fountain would be a boon for next summer’s Jazz on the Green.”

Mr Wanders hopes that whoever is responsible for the fountain can be persuaded to act.

So far, he has been told that it is not the responsibility of Barnet Council’s department for parks and open spaces, and he is not clear which authority might be in the best position to put pressure on Thames Water to reconnect the water supply.

Although out of order, the drinking fountain still has four push-button taps above water bowls and rings which once held cups, together with a water trough at ground level for dogs.

According to the website of the Metropolitan Drinking Fountain and Cattle Trough Association, it is one of three in the borough; Victoria Recreation Ground, New Barnet, and Hendon Park, also have ornate drinking fountains, but all three are out of order.

High Barnet has one of the borough’s six remaining cattle troughs, situated beside Ravenscroft Park, opposite the Black Horse public house.

Previously there were cattle troughs in the High Street, opposite Barnet Police Station, and another next to the old Barnet cattle market, but the former was removed in 1962 and the latter in 1933.

More in this category: « Physic Well to be restored Council election candidates go head to head »