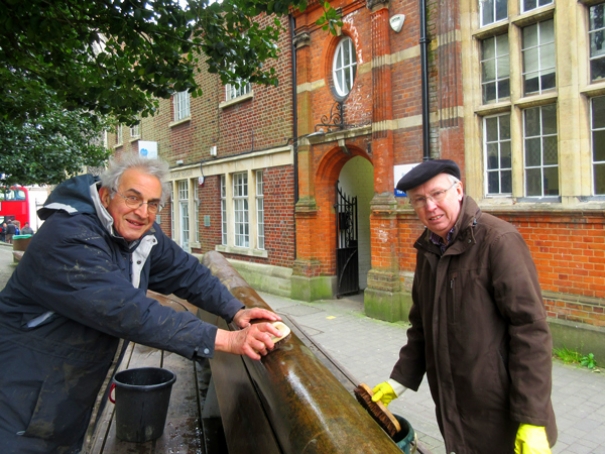 Derek Epstein (left) of the Barnet Society and Gordon Massey, chairman of the Barnet Residents Association, hard at work washing clean the Church Passage bench.
Three volunteers spent the morning washing down and scrubbing clean the long, architecturally-designed teak bench that is beside the gardens in Church Passage, just off Barnet High Street.

The bench, paid for by the Mayor of London’s outer London fund, was installed in 2012 in a bid to improve the appearance of what had become a rather neglected, but much used passageway between the High Street and Wood Street.

As the bench was in desperate need of a wash and brush up – and a new coat of teak oil – Derek Epstein, a long-standing member of the Barnet Society, got together with the Barnet Residents Association to organise a joint working party.

The bench looked dreadful, covered in grime and green algae

“The bench looked dreadful, covered in grime and green algae, and something just had to be done about it,” said Mr Epstein.

“Thanks to a tap in the kitchen of the parish church, we were able to get plenty of fresh buckets of clean water, and the bench will look lovely once it has been properly treated again with teak oil.”

Both the Society and Residents Association criticised the failure of Barnet Council to take proper care of the specially-designed bench.

In several places the seating area had been daubed with graffiti; a number of initials have been carved into the wood; and among the detritus that had to be removed from the surfaces were several dried lumps of chewing gum.

Perhaps now that community action has put the Borough of Barnet to shame, the council might at least ask the High Street cleaning team to sweep under the bench. And, by the way, what about tidying up the flower beds as well!