Children to understand the Battle 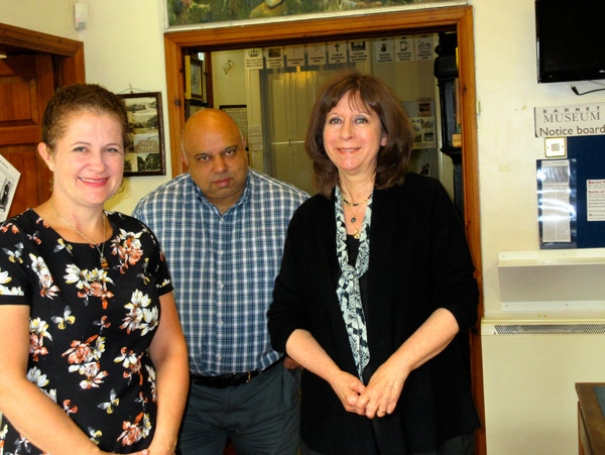 Hannah Brownlow (left), newly-appointed heritage learning consultant for the Battle of Barnet project, with Barnet Museum volunteers Mike Noronha and Hilary Harrison.
Reaching out to local schools to explain and promote Barnet’s role in the Wars of the Roses is one of the key objectives of the lottery-funded Battle of Barnet project.

Primary and secondary school children will soon get the chance to touch and feel military artefacts that were in use in 1471 when the Yorkist and Lancastrian armies clashed in the fields north of Hadley Green.

A loans box filled with medieval replicas, and some original items such a spurs and balls of shot, will be available for teachers to help them engage and enthuse their pupils.

Hannah Brownlow, newly-appointed heritage learning consultant, will work with volunteers from Barnet Museum to develop an education programme for schools in the Barnet area.

“The Battle of Barnet was a decisive engagement in the Wars of the Roses and is really relevant to the history curriculum, but unfortunately many of the local school children don’t know much about it, even though the battle took place on their door step,” said Ms Brownlow.

Barnet is the only registered battlefield in London, and local schools have already expressed great interest in working with the project.

“So, this is a real opportunity to do something creative in telling the story, and especially episodes such as the life of the young King Richard III. We want to encourage schools to develop their ideas, perhaps in drama, the arts and communication technology.”

Ms Brownlow’s priority is to put together a loans box for teachers, which can go out to schools, on a rotating basis.

With the help of Barnet Museum, she is preparing guidance notes for teachers, activity suggestions, maps and pictures together with replicas of some of the smaller weapons, medieval head gear such as a small helmet, dressing up clothing, and perhaps some of the items unearthed during recent archaeological excavations at the battle site.

For the last few years museum volunteers have been giving school presentations about the history of the battle, but this work will now be given much greater emphasis following the appointment of a heritage learning consultant to work with the project for the next six months.

The aim is to have the expanded reach-out programme in place early next year and the loans box should be ready for use by local schools by next summer.

More in this category: « Standing room only for church re-opening Toast to Barnet’s top trade unionist »