Searching for a celebrity connected wth all 272 tube stations on the London Underground has been a lockdown artistic venture for High Barnet cartoonist and caricaturist Simon Ellinas. He hopes his choices for tube stations in the London Borough of Barnet will become a talking point.

Ellinas is well on his way to completing his research and has only another 38 stations to go – on the Circle, District and Hammersmith lines.
Researching each tube station and its surrounding area to identify a famous local person – and then finding a decent photograph to work from – presents a real challenge, as does the task of making the final choice. 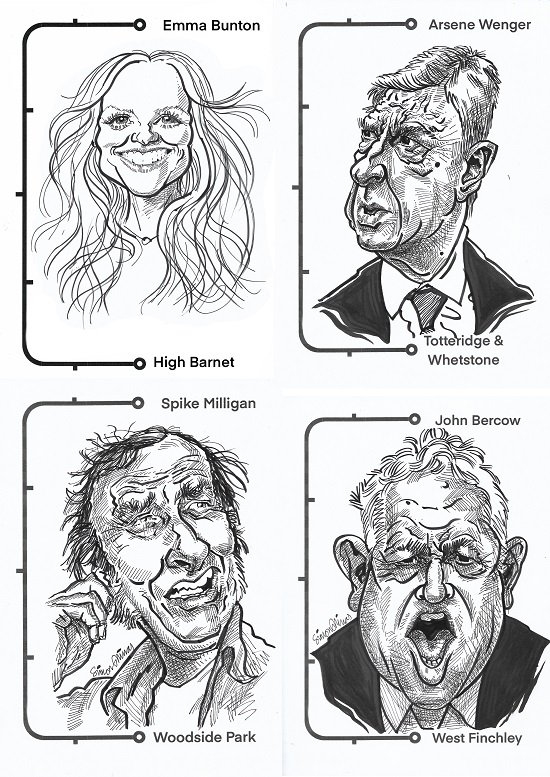 For a celebrity associated with High Barnet tube station, Ellinas settled on the singer songwriter and actress Emma Bunton, of Spice Girls fame, because he says she went to school in Barnet.

His choice for Totteridge and Whetstone is the former Arsenal manager, Arsene Wenger, who lives in Totteridge Lane.

Woodside Park’s chosen celebrity Spike Milligan had a house nearby, as was the case with the former Speaker of the House of Commons, John Bercow, who “for a while” lived near West Finchley tube station.Ellinas admits that these associations for his choice of celebrity might appear somewhat weak, but the “lived there/worked there for a while” is an accepted formula and similar to the criteria used for the awarding of Blue Plaques by English Heritage. 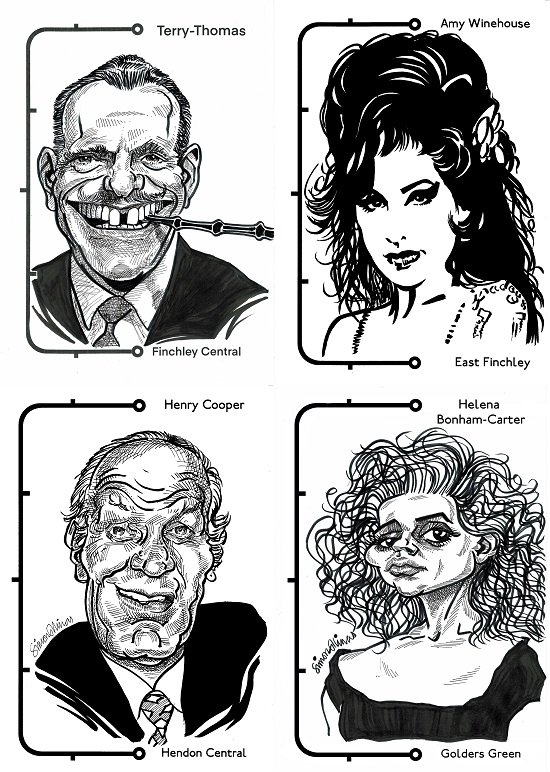 His choices for other nearby tube stations follow along similar lines: Finchley Central – comedian and character actor Terry-Thomas, who was born in Lichfield Grove, Finchley; East Finchley – singer songwriter Amy Winehouse, who lived nearby “for a time”; Hendon Central – heavy weight boxer Henry Cooper, who lived in Hendon; and Golders Green – actress Helena Bonham Carter, who went to school nearby.
When asked why in the case of High Barnet he did not opt for another of the town’s historic famous “names” – such as the novelist Fanny Trollope or the physician and explorer David Livingstone, who are both commemorated with Blue Plaques on houses on Hadley Green, or perhaps the musician and broadcaster Humphrey Lyttleton – Ellinas said he wanted to concentrate on celebrity names as a way of engendering some publicity.
“I chose Emma Bunton for High Barnet because she is eminently ‘tweet-able’, and she does meet the other challenge of finding an interesting face.
“You can never tell where famous people are going to crop up and my criteria for inclusion are very wide, otherwise it would be more difficult filling every station.
“Ideally, they should have been born there, but if they just lived there even for a very short period – and Charles Dickens lived for a short period almost everywhere – or worked there or perhaps sang or wrote about the place, those are all qualifying factors.”
Ellinas began the project at the start of the year, and it became an obsession during lockdown.
“I was inspired to start drawing a celebrity for every tube station after completing last year’s project – a celebrity for every date in the diary.
“I felt like keeping the creative momentum going and it became a saving grace during lockdown, having something definite to do every day.
“Currently I am working on the Circle line – trying to find someone for Blackfriars station.”
Ellinas hopes his work will attract the interest of Transport for London, the London Transport Museum, or the office of the Mayor of London. Another possibility is that his illustrations might feature in a magazine or form the basis for a book.
“I am already getting some ‘likes’ on social media and I shall continue with the project come what may, as I draw every day, just as other people breathe.”
Ellinas, a High Barnet resident for 30 years, trained as a graphic designer and has produced illustrations for a wide range of magazines, websites, newspapers including the Daily Mail, Sunday Times, Sunday Telegraph, News of the World, and BBC, ITV, Channel Four News and Channel Five News.
http://wwwlondoncaricature.uk
https://www.facebook.com/simon.ellinas
https://twitter.com/cartoonelli
https://www.linkedin.com/in/caricaturistlondon/
https://www.instagram.com/simonelliart