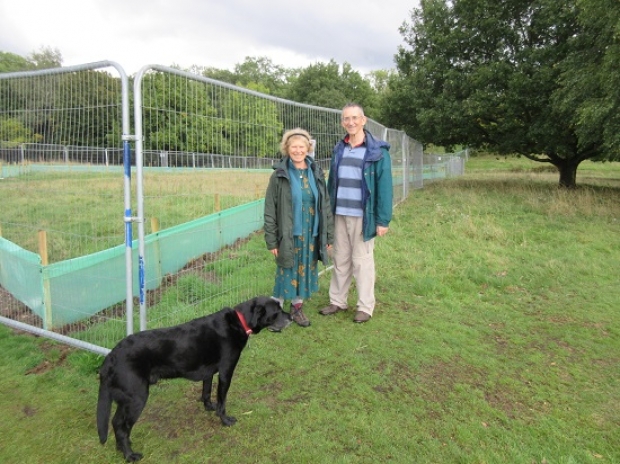 Michael and Karen Hallowell -- and their dog Monty -- check out the protection for great crested newts
Plastic barriers and traps have been set up across Monken Hadley Common to safeguard great crested newts which might be threatened by the construction of a new water main.

Affinity Water began work last month on the Cockfosters resilience main to boost water pressure in Hadley Wood.
It will run from Cockfosters Road up Beech Hill and Camlet Way, and then across Hadley Common and King George’s Field, to connect with a water main in Barnet High Street.
Special environmental safeguards are needed because Gladsmuir pond, which borders the Hadley Common roadway, close to the junction with Camlet Way, hosts up to 50 or so great crested newts – a protected species whose habitat must be preserved. 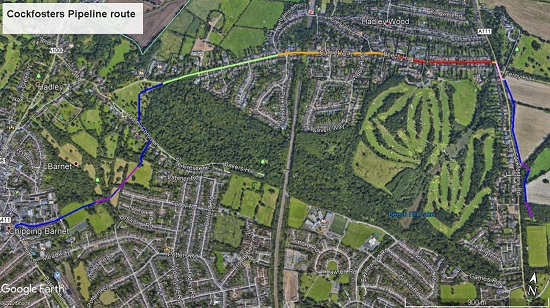 Construction work is due to be completed by December 2021 and will mean months of traffic disruption.
Beech Hill is to be closed temporarily – from 5 October to 11 November – and there are warnings of temporary traffic lights for ten months along Camlet Way and other nearby roads.
Digging a trench across Hadley Common poses considerable environmental concerns not least because the new water main crosses the newts’ migration path from the vicinity of the pond to the areas where they hibernate nearby under trees and scrubland in Hadley Woods. 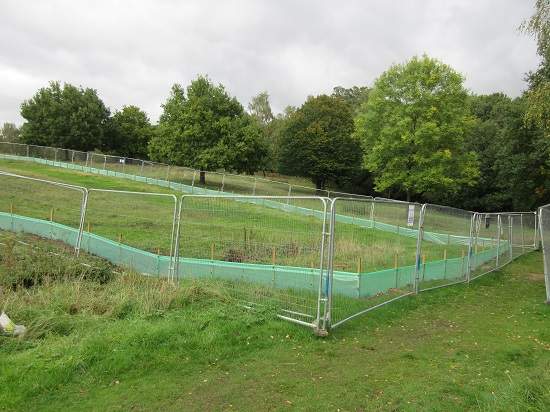 A cross section of the common which might contain migrating newts has been divided up and enclosed inside two-foot high plastic barriers.
Numerous traps to collect newts have been set up within each of the cordoned off areas which are all surrounded by much larger barriers to prevent public access and possible disturbance. 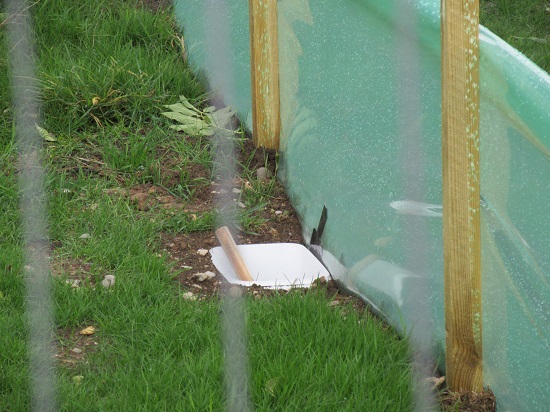 Traps inside the plastic barriers are being inspected every day and any newts that are found are recovered and then released closer to the woodland.

The traps have proved effective: so far four adult female great crested newts, 15 smooth newts, four slow worms, and several toads and frogs have been rescued and released. More might be found as ecologists who are managing the clearance of the habitat within the fenced area continue their work until mid to late October.

Roger De La Mare, a conservation volunteer with the wardens for Monken Hadley Common, welcomed the steps that had been taken by Affinity Water and their contractors Barhale to protect the newts and safeguard the common.
“We have been assured that the common land will be fully restored once the main has been installed.
“Affinity Water have promised to give us advice and support in improving the habitat in and around Gladsmuir pond. They will also assist with future tree planting to replace trees that will have to be felled when the trench for the main is dug.
“An environmental survey conducted during the summer identified a population of up to 50 great crested newts in and around the pond. As they are a protected species, Affinity needed a licence for the work within their habitat.
“Newts migrate from the pond towards the wooded area for hibernation and the barriers and traps have to be in place for at least 60 days, from mid-August to mid-October, to ensure the safety of any newts within the enclosed areas.”

Mr De La Mare said the wardens had been assured that the traps – small white buckets – will be emptied every day and any newts that are rescued will be released within the wooded area.
“We are hoping to get a full report on how many newts have been rescued. We will also want to hear more about the other action they are taking when clearing vegetation.
“We were surprised at the amount of land that has been enclosed within plastic fences and barriers, but so far we think Affinity and their contractors are doing all they can to respect the newts’ habitat and the common land.” 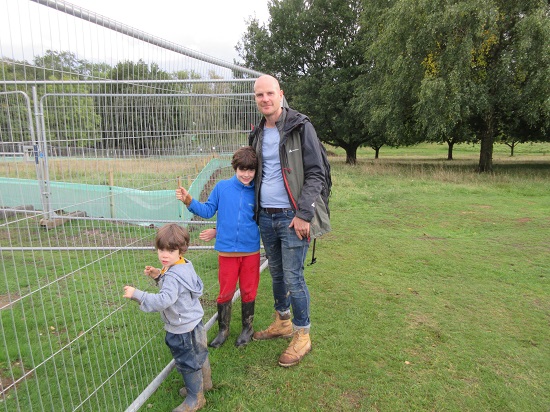 Many of people visiting the common or walking their dogs have been mystified by the reasoning behind the outer barrier and inner plastic fence but there is general agreement that the newts must be protected.
Matthew Carlisle, out walking with his sons Felix (3) and George (9), said they were fascinated to think there were such rare newts on the common. “We live near Hadley Green and the boys have often played around the pond and the woods and it has been a real education for them to hear about the newts.”
Michael and Karen Hallowell, from New Barnet, out walking with their dog Monty, were re-assured by the steps which Affinity Water had taken but hoped the contractors would be equally assiduous in re-instating the common.
“Often contractors leave land in a mess, uneven and without vegetation, so we must hope Hadley Common will be looked after.”
Hadley Common has another environmental headache: oak processionary moth caterpillars have been found in a number of oak trees within Hadley Woods.
Infected trees have been cordoned off because the caterpillars have thousands of tiny hairs that can cause unpleasant skin, eye and throat irritations in people and animals.