“Bricks” up against “Bees” 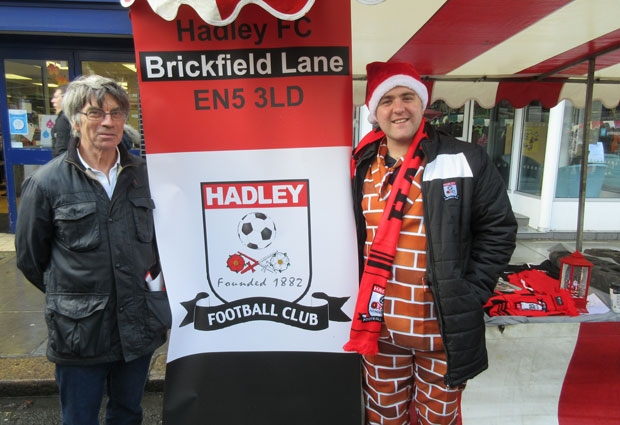 Oliver Deed (right) in the full splendour of his “Come on You Bricks” outfit along with fellow supporter Tony Swingler
“Come on you Bricks” is now rivalling the Barnet football chant of “Up the Bees” as supporters of Hadley Football Club promote their much-improved recent performances and refurbished football ground.

Hadley FC – which is even older than Barnet Football Club – plays at Brickfield Lane, Arkley, hence their nickname “The Bricks”.

After improvements to their ground and facilities costing £400,000, Hadley FC is hoping to attract Barnet FC supporters who miss out whenever Barnet is playing away from its stadium at the Hive, in Camrose Avenue, Edgware.

“We are determined to build up our Barnet fan base,” said Hadley club spokesman Oliver Deed.

Hadley is currently placed third in the Spartan South Midlands Premier League and is offering free entry for its needle match against league leaders Biggleswade at Brickfield Lane at 3pm on Saturday 15 December.

“We have made great progress since our ground and facilities were refurbished and we have all sorts of offers to attract new supporters: season tickets at a special price of £10 and free entry for school pupils.

“As we have now got a long-term lease at Brickfield Lane, we are hoping to put Hadley FC on the football map as a real community club.”

The £400,000 upgrade at Brickfield Lane included pitch drainage, the installation of floodlights, pathways, a spectator stand and the refurbishment of the pavilion, clubhouse and changing rooms.

The work was financed by grants and donations from the Football Stadia Improvement Fund, Sport England, the Peter Harrison Foundation, the Happy Charitable Trust, Village Healthcare and the Back2Barnet campaign which had raised money to encourage Barnet FC to return to High Barnet after leaving the Underhill stadium in 2013.

Hadley FC was founded in the 1882-83 season, six years earlier than Barnet FC which is currently celebrating its 130th anniversary.

The 1880s and 1890s were the early glory years for the club when it used to attract crowds of several hundred to its games on Hadley Common. A notable achievement during the early years was a 1-0 defeat of Tottenham Hotspur. 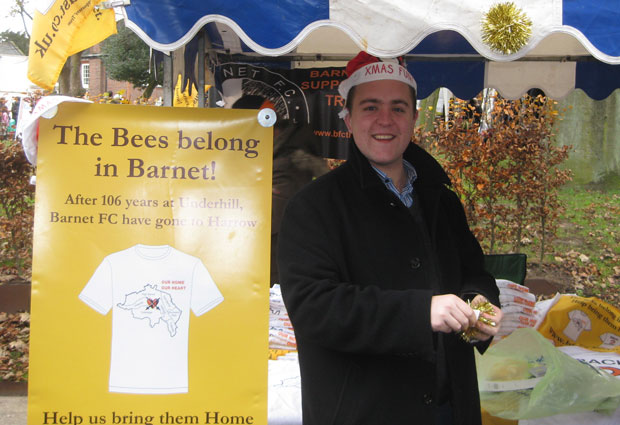 5 years ago Oliver Deed was spokesman for the Back2barnet campaignGradually Barnet FC drew players away from Hadley and its activities hit a low key as by 1912 Barnet had become the most prominent.

Club fortunes changed after World War II with the emergence from the Hadley ranks of the famous Lester Finch who went on to play for Barnet and become a full amateur international.

From 1947, Hadley, then a member of the Barnet and District League, played at Wrotham Park at the Barnet end of Kitts End Road, and moved to Barnet Playing Fields in 1955.

After playing at a succession of pitches – in St Albans Road, Chandos Avenue Whetstone, and Woodside Park Club, Southover – Hadley moved to Brickfield Lane in 1992 and joined the Herts Senior County League. In 2008-09, Hadley’s application to join the Spartan South Midlands League was finally accepted.

In 2016-17 the first team returned to Brickfield Lane – after previously playing at Potters Bar – and finished sixth in the league.

Another highlight was an outstanding FA Cup run, eventually being knocked out in a third qualifying round against Eastbourne Borough.  Hadley finished in sixth position again in the 2017-18 season.