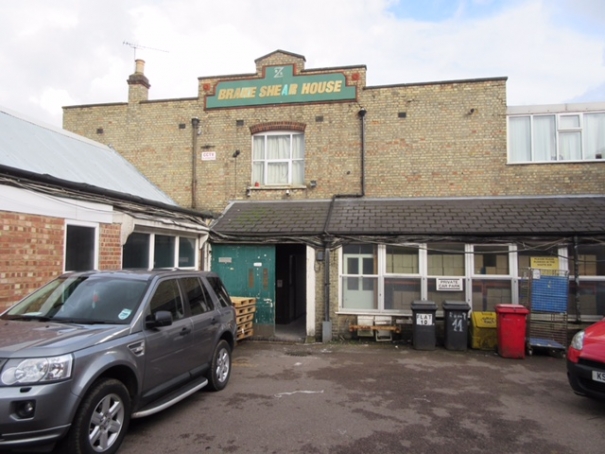 The priority should be to provide alternative premises for the small businesses that will be displaced once the original buildings are demolished later this year.

Barnet Council has suggested to the developers Wrenbridge that the emphasis should be on providing affordable housing, but representatives of Barnet Society,

Love Barnet and Chipping Barnet Town Team say that instead far more should be done to accommodate light industrial workshops and other artisan occupations.

If planning approval is obtained, Wrenbridge hope to start work at the end the year clearing the site ready for the construction of a four-storey apartment block comprising 32 one- and two-bedroom flats; a three-storey office block with space for 56 workers; and a mews of eight three-bedroom town houses.

Some changes have been made in the design of the development since Wrenbridge exhibited its original proposals last November. The apartment block has been reduced from five to four storeys, and the developers have abandoned the idea of creating a gated housing complex.

Electronically-operated bollards will now be installed to control vehicular access via a new approach road that will be created from the High Street once the Cakez Café coffee shop has been demolished, enabling the existing alleyway to be widened to take two-way traffic.

Other features of the revised place include room for 34 car parking spaces for the flats and houses; seven spaces for the office block; and room to keep 52 cycles.

Jeff Wilson, a director of Wrenbridge, said Barnet Council was suggesting that that 20 per cent of the apartment block should be for affordable homes. It will have 20 two-bedroom flats, and 12 with one bedroom.

“As we understand it, the council now wants the emphasis to be on providing affordable housing rather than affordable workspace.”

But the council’s advice to Wrenbridge is the opposite of what local planners were urged to adopt when they met the representatives of local groups, says Robin Bishop, chair of the Barnet Society’s planning and environment group.

“We made it clear to the planners last month that our over-riding priority is for affordable workspace to be provided on the Brake Shear House site rather than affordable housing.

“Chipping Barnet does have a serious shortage of space for workshops and other start-ups that cannot afford market rents. We made this clear to the planners because we support economic as much as residential diversity, especially in this location.”

When representatives of Wrenbridge and its architect J-J Lorraine, of Morrow and Lorraine, met local groups (9.3.2016), Mr Wilson insisted that the developers were making contingency plans for affordable workspace in the new office block.

It would have a total of 6,250 square feet of space, sufficient room for 56 office workers, but the ground floor could easily be sub divided to provide premises for light industrial and artisan workshops.

“We want demand for space in the office block to be market led, with premises on offer on perhaps a leasehold or freehold basis, and there would be the potential for artisan workshops on the ground floor,” said Mr Wilson.

Mr Lorraine outlined the revised plans: the main concession was a reduction in the apartment block from five to four storeys in recognition of concern that the height of the new building would have a detrimental effect on the High Barnet skyline, especially from King George’s Field.

“It is a massive win for the local community, and shows we have been listening. We also intend to plant a row of trees down the entrance approach road, and plant bamboo screening to increase the privacy of residents in Hyde Close.

“The central space between the apartment block, row of town houses and office block will be like a central square, rather like a market square, reflecting the historic nature of Chipping Barnet.

“With the architecture of the new building we are trying to reflect the character of local buildings in Monken Hadley and the Tudor Hall.”

Wrenbridge is hoping to present its final plans to Barnet Council later this month and if approval is obtained, work on the demolition and construction should start by the end of the year.

More in this category: « Go ahead for 114 homes on Elmbank Another historic building to be converted for housing »