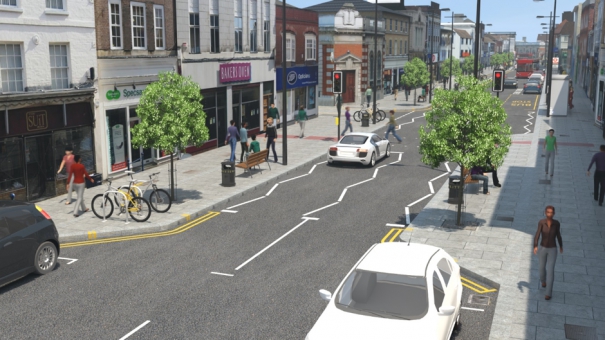 Visualisation looking north from Moxon Street. (The buildings are not the actual ones.)
A three-week public consultation has opened on a new scheme of improvements to the High Street – and it’s vital that residents support this chance-in-a-generation to rejuvenate it.

A description of the proposals, a plan and visualisations of how the street will look are on show in Chipping Barnet Library and soon, we hope, in a shop in The Spires. They’re also posted on the Council website:
https://engage.barnet.gov.uk/High-Street-Barnet-improvements-statutory
But you have only until Thursday 21st June to comment.

Apart from a letter to residents close to the High Street, there’s been no Council publicity for the consultation. It’s disappointing, too, that the Council’s description fails to convey the full value of the proposal, and that information on key design details is lacking.

For a start, it doesn’t mention that the works will be funded mainly by Transport for London, not the Council.

It also omits to mention that the whole initiative came from the Chipping Barnet Town Team, not from the Council. The Town Team – instigated by the Barnet Society nearly ten years ago – has been pressing for years for improvements to our town centre. And the idea of planting a ‘green chain’ of trees from Barnet Hill to Hadley Green came from our Vice President, David Lee, twenty years ago.

So we fully endorse the principle of enhancing pedestrian experience through selectively widening pavements (keeping the existing two lanes of traffic), narrowing pedestrian crossings and planting trees. These will transform the look of the street, reduce the domination of traffic without slowing it down, and enhance air quality.

But the scheme will do much more than that. By providing more set-down/pick-up points, better sign-posting and seating, it will become more accessible and attractive for parents with children, those with disabilities or impairments, and the elderly.

The end result will be a calmer, less cluttered and more pleasurable place for pedestrians and wheelchair-users to shop and linger. It will improve perceptions of Barnet High Street among both locals and strangers passing through – and traders will benefit.

This is not a novel, untested notion. Across London and the UK, schemes like ours have transformed unprepossessing parts of Bromley, Harlesden, Shepherds Bush and Walworth, to name just a few. Members of the Town Team have visited them, been pleasantly surprised, and learnt from them.

In the past, the Council’s lack of interest in Chipping Barnet has been frustrating – in contrast to North Finchley, where it has embraced similar improvements to the public realm.

Much will depend on getting the design details right, and we still hope to influence these. They include planting appropriate tree species in the ground, not in planters. The quantity and distribution of benches, cycle hoops and bins also need to be agreed.

In addition, we want better signage to local facilities and places of historical interest, plus a heritage trail designed in conjunction with Barnet Museum. And we’d like permanent brackets on lamp-posts for banners to commemorate the Battle of Barnet, as Tewkesbury has so successfully done for another Wars of the Roses battle site.

The Barnet Society Committee believes that the overall strategy is right. Working closely with the Chipping Barnet Town Team, Barnet Residents Association and Council Highways, we’ve helped develop a better scheme than the one that caused controversy last year.   We have reservations about important details, but these can still be sorted out.

If we let this chance go, we’re unlikely to get another. We recommend you to support it. Please do so before the deadline!

Emailing: This email address is being protected from spambots. You need JavaScript enabled to view it.