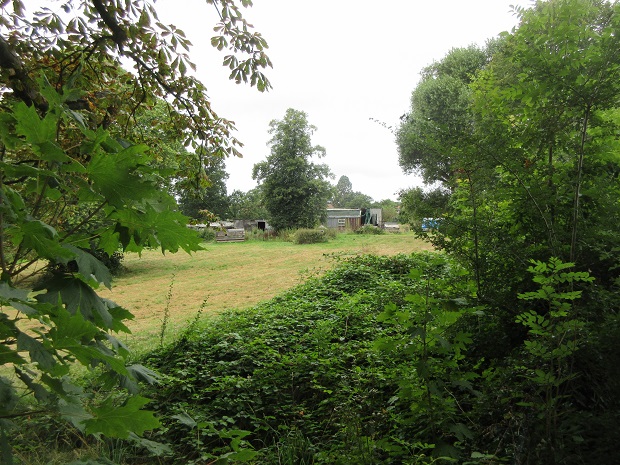 A spirited plea to preserve one of High Barnet's prominent green spaces was heard at the opening day of a public inquiry into plans to build 152 houses and flats on the Whalebones fields and woodland.

At the heart of the conflict was the degree to which Hill Residential’s plan to build an additional housing estate between Wood Street and Wellhouse Lane would harm the rural character of the Wood Street conservation area.

Public notices attached to the hedge alongside the Wood Street perimeter give notification of the inquiry. 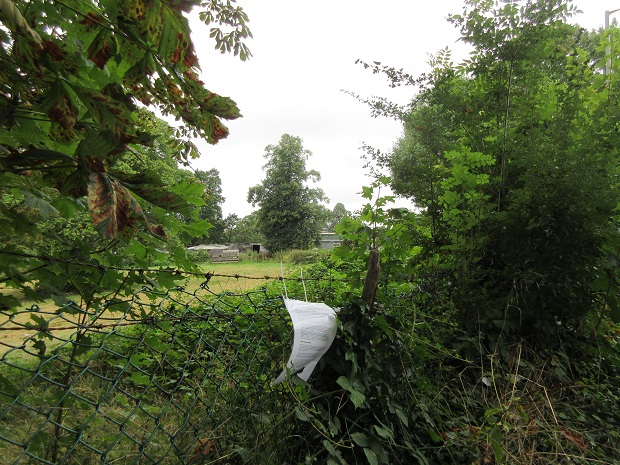 After a dramatic U-turn by Barnet Council last July – overturning the planning committee’s decision – opposition was led by the Barnet Society which has campaigned for the last five years against what it believes is the overdevelopment of the last remaining fields between Arkley and High Barnet.

Instead of a green break and natural buffer there would be “continuous urban development” towards the town centre, said Guy Braithwaite, one of the society’s planning advisers.

He argued that the rural and agricultural character of the Whalebone estate was a key characteristic of the Wood Street Conservation area and the harm that would result would be substantial. Another long-standing opponent of the scheme, the Chipping Barnet MP Theresa Villiers was also convinced there would be substantial harm to the "leafy, open nature" of the site if 70 per cent of the land was used for new homes, roads and car parking.

Barnet was already delivering more new homes than any other London borough and these "precious fields" were a green open space and wildlife habitat that should be preserved.

The only local organisation speaking up in support of a new housing estate at Whalebones providing 53 houses and 99 flats was the Barnet Residents Association.

Its spokesman Gordon Massey explained why the association were in favour of what they considered was a “very restrained and reasonable” residential development and why loss of the farmland was not a “disaster” for the conservation area.

Planning inspector Jonathan Price is conducting the week-long online inquiry and plans to hold a series of detailed discussions and site visits.

In his opening statement, Edward Grant QC, representing Barnet Council, explained why at the last minute the council had withdrawn its opposition to the Whalebones scheme after it was previously rejected on the casting vote of the planning committee chairman in October 2019.

The reason for the change of mind was the drafting in July of a new local plan for Barnet in which the Whalebones farmland and woods were zoned for residential use.

Therefore, Hill Residential’s application for 152 new homes at Whalebones – an application being made on behalf of the Gwyneth Cowing trustees – was now consistent with the council’s plan for the area. 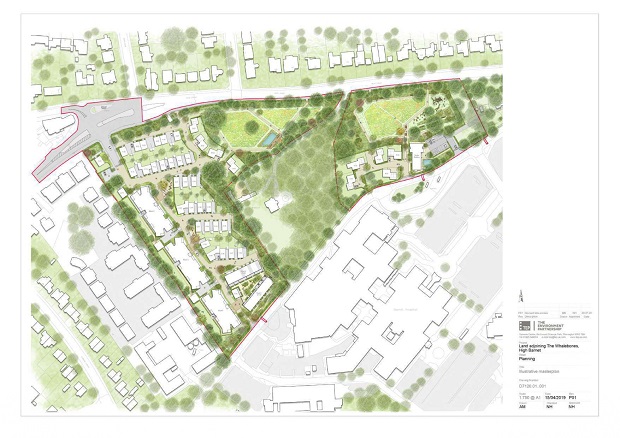 Council planners accepted there would be some harm to the conservation area but that was outweighed by the public benefit of 61 of the 152 new homes being designated as “affordable” and because of the provision of new public open spaces and access at the Whalebones woods and farmland.

Simon Bird, QC for Hill Residential, welcomed the council’s “sensible” decision to withdraw its objections and to instead promote a scheme on which the council would have to rely if it was to meet its housing target, and especially the target for affordable homes.

Barnet was the 12th least affordable council district in the whole of England and Wales and the acute need for more affordable housing explained why the application had now been endorsed by the Mayor of London, Sadiq Khan.

He stressed the public benefit of the development: there would be two parkland areas, a healing garden, public walkway, space for the existing agricultural smallholder and a community building for the Barnet Guild of Artists and Barnet Beekeepers Association.

Hill Residential welcomed the support of the Barnet Residents Association for whom Mr Massey said consultations with the association’s 750 members had shown that only four were opposed to the scheme and that reaction had been “very muted”.

“Public interest in the scheme is not great...We are not sensing outrage at the large Whalebones field being built on...Knowing it was always possible we might be local pariahs, that reaction gave the association confidence that supporting the 152 homes is not out of line with sentiment in the town.”

Mr Massey disputed the official figure of 560 objectors to the scheme when in fact “a lot of people who objected had voted twice”.

Robin Bishop, who leads for the Barnet Society on planning, said consultation with their membership of over 600 had shown almost unanimous support for objecting to what the society considered was overdevelopment of the site.

Hill Residential could easily have proposed a “more modest, less harmful scheme” which would have maintained income for the Whalebones trustees and such an aim would have been closer to the heart of the late Gwyneth Cowing. 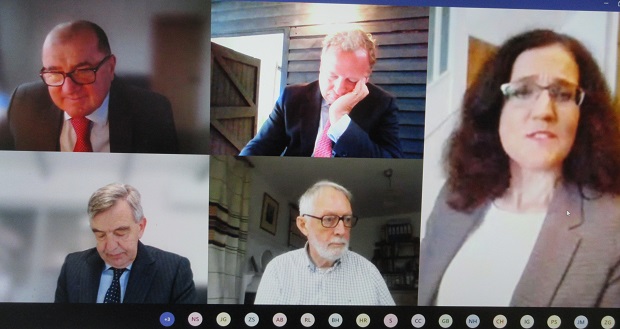 In making her submission, Theresa Villiers -- pictured at the online hearing -- challenged the argument that public access to the Whalebones estate was one of the benefits that would outweigh the harm. The fact there was no existing public access did not mean the Whalebones fields and woods were "any less worthy of protection".  As MP for the area, she had knocked on hundreds of doors and "saving Whalebones" frequently came up around the site and across the constituency.

Nick Saul, another of the Barnet Society's witnesses, described himself as a third generation Barnet resident from whom Miss Cowing had personally exacted a promise that he would defend the retention of the Whalebones farmland which she feared might become the subject of a compulsorily purchase order.

He argued that Miss Cowing’s trustees should have ensured the continuation of Whalebones as an agricultural holding, with a modern urban farm, because she wanted the land to continue to be farmed even if it lessened the value of the estate. 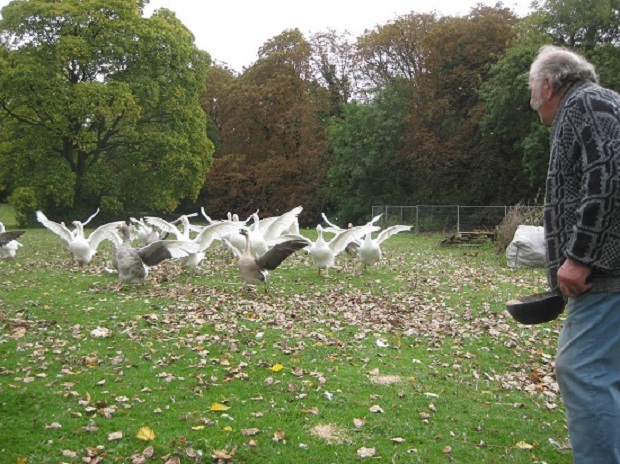 Peter Mason, the tenant farmer, seen above in better health with his flock of geese, was granted a lifetime tenancy by Miss Cowing.

Instead of succession planning by the trustees, Mr Saul said the key argument seemed to be that Whalebones was finished as a farm; that the open space had no value; and that it should become a housing estate, which was in line current intention of the developers and planning department.

Mr Saul questioned why Barnet Residents Association appeared to have become an advocate for the scheme and why they believed that the advantages of the development outweighed the disadvantages when the people of Barnet were in “overwhelming opposition” to the development.

Mr Saul's remarks were challenged by Mr Massey who denied the residents association had worked hand in glove with the council’s planning department or become a proxy for them.  All the information quoted by the association was from the council's statements. There had been no contact between his association and council officials or councillors since the association submitted its views in September 2019.

Other witnesses objecting to the scheme included Councillor Julian Teare whose ward includes Whalebones. When touring the area and talking to residents he had found that people “uniformly objected to the plan, without exception”. 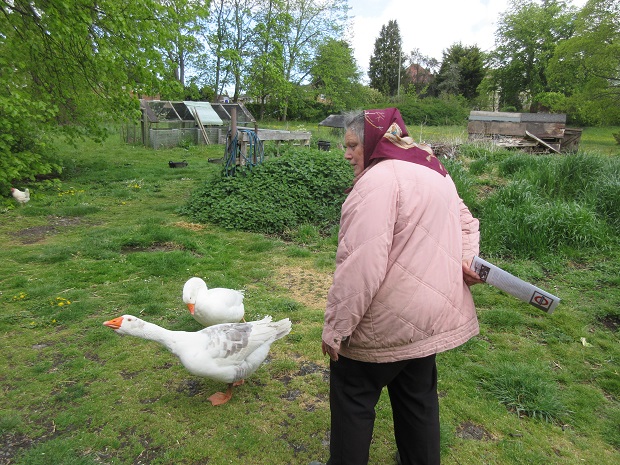 Councillor Teare spoke up for tenant farmer and his wife Jill – seen above – whose lives would be “thrown in the air” if they lost their agricultural smallholding and were relocated to a smaller area beside their house in Wellhouse Lane.

“They should be allowed to see out their lives peacefully on the land.”

Dr Sundus Tewfik, another opponent of the project, said the land should continue as a protected farm tenancy and continue to be used for agricultural purposes.

“This could be a sustainable and profitable farm within a residential area...No one ever believed Barnet Council would approve this plan and abandon the farm for redevelopment.”