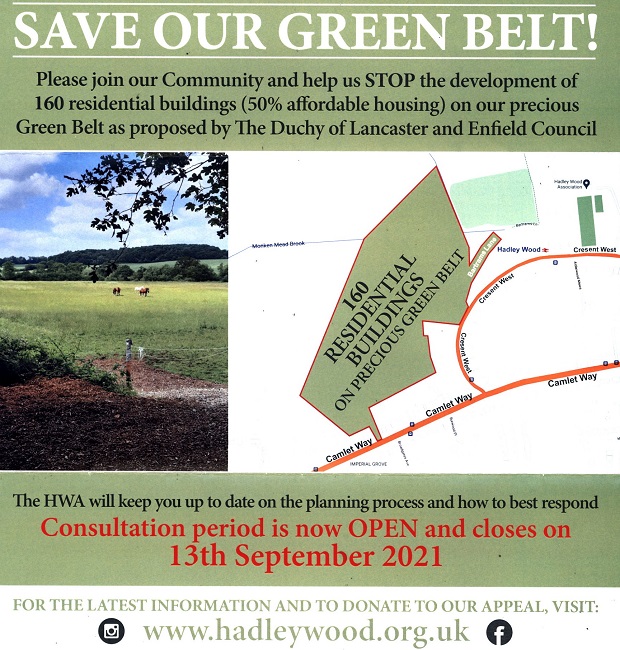 A determined campaign has been launched by the Hadley Wood Association to fight plans for 160 homes to be built on Green Belt land -- one of a series of Green Belt housing developments being proposed by Enfield Council.

Fields at the rear of Camlet Way and Crescent West, Hadley Wood, have been put forward as a possible site to help meet Enfield’s target to add 25,000 new homes to its 20 year plan.

A consultation period closes on Monday 13 September and the Barnet Society is joining the Hadley Wood Association in urging views and concerns to be registered by the deadline.

Under its draft plan, the council is proposing substantial development within the Green Belt including 3,000 new homes at Crews Hill and another 3,000 on the Vicarage Farm site to the east of Trent Park. 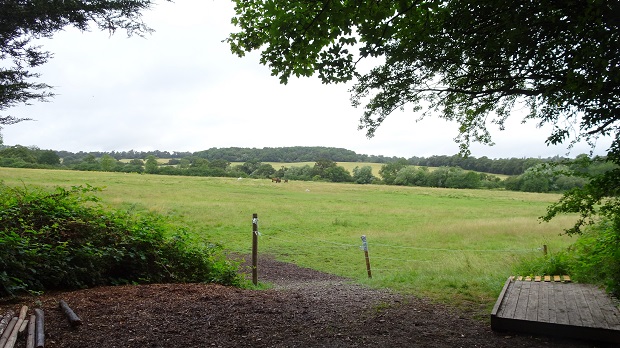 The three meadows that make up the Hadley Wood Green Belt site are owned by the Duchy of Lancaster which holds a portfolio of land and property which provide an income for the Queen.

Robert Wilson, chair of the Hadley Wood Association, said they were preparing for a long campaign and were about halfway towards raising a £100,000 fighting fund to pay for consultants and legal representation so that Enfield’s plans could be challenged at a public inquiry.

Their first objective was to encourage objections to the loss of unique Green Belt land and prevent further urban sprawl around Hadley Wood.

“Our priority is to raise awareness locally and urge local residents to respond.”

Green Belt land adjoining Camlet Way and Crescent West was not included in the previous draft of the local plan, but the Duchy had put the fields forward following the council’s appeal for more sites.

Mr Wilson said the Association hoped to open discussions with the Duchy and argue that the site should be withdrawn as they did not accept the Duchy’s argument that the fields were not of great value to the Green Belt and that the site benefited from being close to Hadley Wood station.

“We are not convinced by the Duchy’s argument. We think these meadows are unique and should be preserved. We also disagree about the proximity of the station as we don’t think we have good transport links.”

Green Belt land is under threat around the whole perimeter of Greater London and Enfield’s plan to use large tracts of existing green space and farmland for 6,000 of 25,000 homes to be built in the next ten years has provoked considerable alarm among neighbouring local authorities. 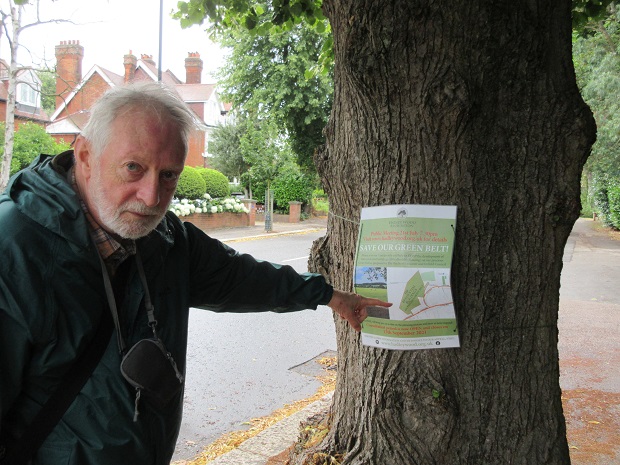 Robin Bishop, who leads on planning for the Barnet Society, said Enfield’s plan would affect Barnet residents and should cause concern, especially among those who valued the Green Belt, as he explains:

The London Borough of Enfield forms our eastern border, so the Society takes an interest in prospective developments there.

Many of us travel through – and enjoy – Enfield’s Green Belt, often in the course of shopping trips to Enfield shopping centres, Enfield market and Crews Hill, or leisure in Trent Park. Some of our residents work in Enfield and some of our students attend Enfield schools.

Our principal concern is the Council’s plans to develop substantial sites in the Green Belt close to us. These include Hadley Wood (160 homes proposed), Holly Hill Farm (a proposed logistics hub by M25 junction 24) Crews Hill (3,000 homes) and Vicarage Farm (3,000 homes on a site renamed Chase Park, east of Trent Park).

Not only do we object on principle to erosion of the Green Belt, we would take particular exception to any loss of the green buffer that exists between our boroughs, especially north and south of Hadley Road and Enfield Road. These attractive stretches of countryside are vital to preserving the separate identities of Barnet, Cockfosters, Enfield, and other settlements that would otherwise have merged into amorphous suburbia.

Some development may be justifiable under exceptional circumstances, but they are not demonstrated in Enfield’s consultation documents. Two years ago, Space to Build, Enfield, a study by the Campaign to Protect Rural England (CPRE) with the Enfield Society and Enfield RoadWatch Action Group showed that Enfield’s housing needs could be accommodated on brownfield sites in the borough.

CPRE research also shows that “only a tenth of homes built in the Green Belt are ‘affordable’ and these are rarely for social rent. Additionally, people living in Green Belt developments have poor access to public transport and are tied to owning and using cars, as well as being stuck with the cost of commuting, creating further financial stress for families on low incomes”.

Local groups including Enfield Climate Action Forum (EnCaf) are united in opposition to the Council’s plans. As EnCaf observes, “Building on the Green Belt…leads to urban sprawl, undermines our ability to tackle pollution, climate change and the collapse of ecosystems, and eliminates local food production, wildlife habitats and of course areas for recreation for Enfield’s growing population.”

According to Enfield, Chase Park will be “a deeply green extension to the urban area accommodating residential uses, facilitating improved access to the countryside and drawing the rewilding areas of Enfield Chase into the urban areas” and “biophilic design principles should be incorporated where possible to maximise urban greening and integration with blue and green networks. The development must include greening elements on buildings, gardens, in streets in public open space and through the materials used”.

That might sound promising, but all new housing today has to follow those principles already. And its policy SP PL9.17 states merely, “Development proposals should facilitate a shift towards a net zero carbon future.” Enfield (and the rest of us) have to do much more than that by 2039 to avoid climate disaster. Chase Park is not the ‘exemplar’ the Plan claims.

Enfield’s proposals for Crews Hill are better tailored to its existing character: “Residential-led redevelopment of brownfield sites will integrate with the area’s horticultural and food-producing industries, creating a unique identity and function, with residents contributing a range of skills, and benefitting from education, training and employment opportunities close to home, reducing the need to commute to work” and “The context of varied and utilitarian glasshouse building form and horticultural land use should inform innovation in architecture and public realm such as through the potential for covered public spaces, winter gardens and glass house space for every home, creating a unique lifestyle related to the identity of the place.”

But we have strong reservations about the continuing commercial viability of Crews Hill’s present businesses faced with soaring land values and traffic congestion. Significant rail and road improvements must accompany any residential development – but transport occupies only five of the 390 pages of the Plan.

How to comment on Enfield’s draft (Regulation 18) Local Plan

Let the Barnet Society know your concerns so that we can include them in our response to the public consultation. Please email them to This email address is being protected from spambots. You need JavaScript enabled to view it. by Friday 10 September.

If you want to know more, go to https://enfieldsociety.org.uk/localplan/#respond or https://enfieldroadwatch.co.uk/. Their sites also provide clear directions if you wish to comment directly to the Council. The deadline is Monday 13 September.