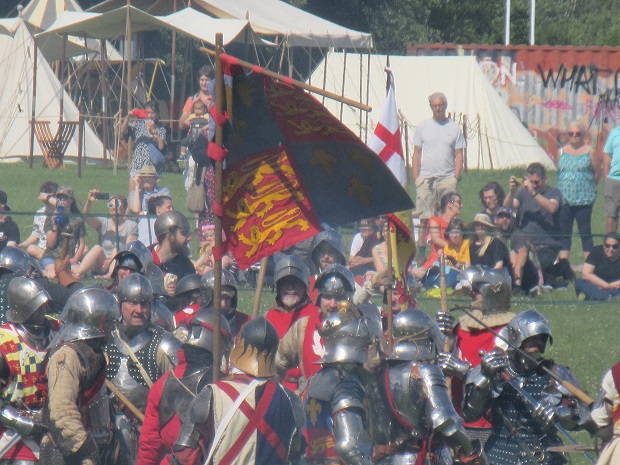 Displays by mounted knights in armour and men at arms were another first at the increasingly popular Barnet Medieval Festival, now in its fourth year.

A record number of over 300 re-enactors and 70 medieval tents filled the Byng Road playing fields for the two-day festival.

On the opening Saturday, the crowds were ten deep around the arena for the re-enactments of the 2nd Battle of St Albans (1461) and the Battle of Barnet (1471). 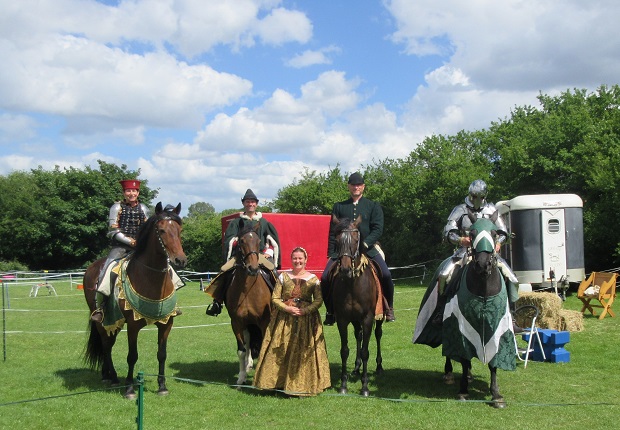 Riders and their horses – two of whom were knights in armour – thrilled spectators with their skill at arms exercises, riding at speed, using swords, lances and javelins

Training at decapitating an opponent – with a melon on top of a wooden pole, instead a head – produced a dramatic spectacle. 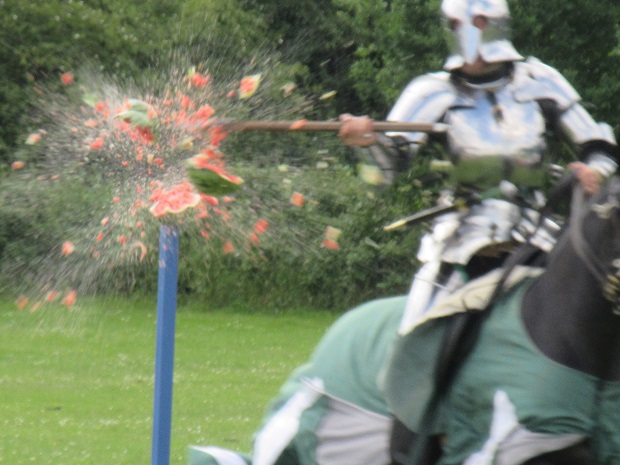 Robert Martin, in full armour, riding Betsy – on her first outing at a medieval festival – gave a masterful display, slicing the melon in half, to the amazement of the spectators. 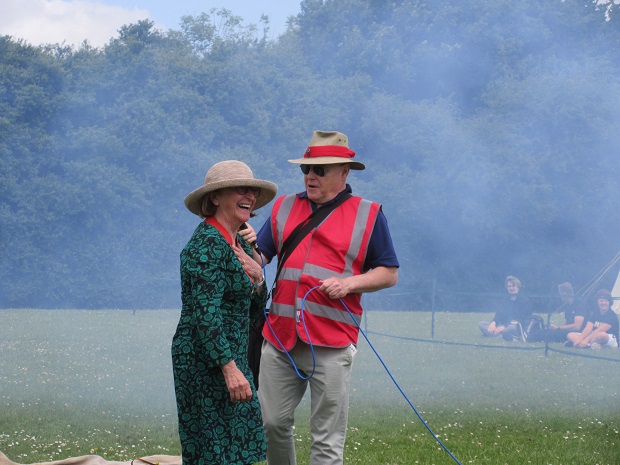 Event co-ordinator Howard Giles, one of the founders of the festival, welcomed Councillor Gill Sergeant, representing Barnet Council, who fired a medieval cannon to open proceedings. 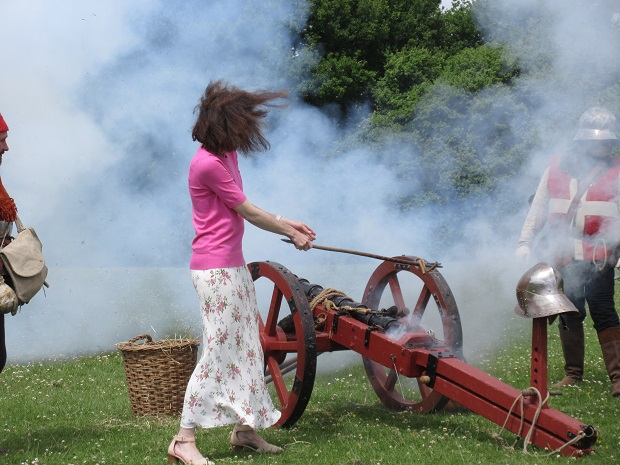 She was joined by the Chipping Barnet MP Theresa Villiers who told the crowd it was great to be visiting the festival once again.

“The Battle of Barnet gives us our place in history…it was one of the most violent and decisive confrontations of the Wars of the Roses.”

The organising committee under director, Dr Susan Skedd, was praised for its success in arranging a festival that has become a must-go event in the annual calendar of events for medieval re-enactors.

Attendance at the opening day was well over 3,000. There were stalls for a wide array of traders and local organisations as well as medieval tents, all spread out over Barnet Elizabethans’ rugby pitches and fields. 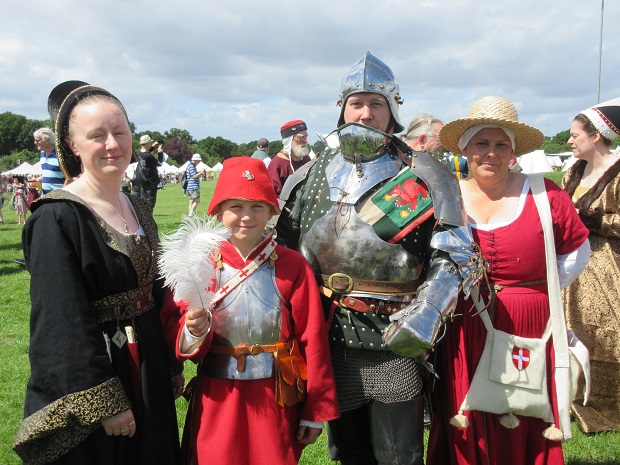 Linda Godden (far right), who co-ordinates the re-enactments, said Barnet’s medieval festival had grown in popularity because it was in an ideal setting, backing on to the Green Belt, with trees all around creating the sort of countryside that would have confronted the Lancastrian and Yorkist armies.

“What makes this event so special is that we are re-enacting two local battles at one festival – the battles of St Albans and Barnet – and that means we can present a range of imaginative displays. 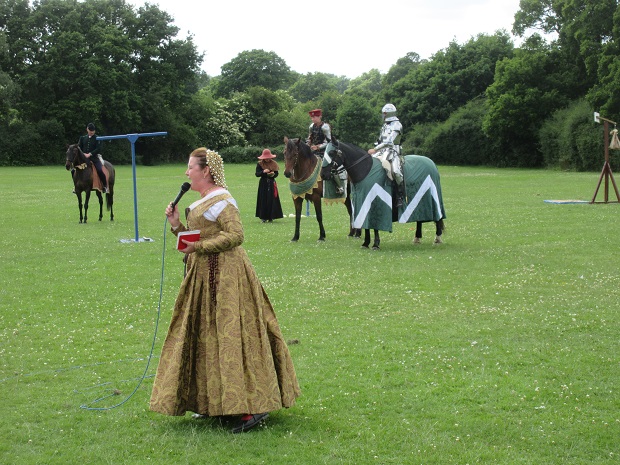 Kate Vigurs, co-ordinator for equestrian display by the Freelance group, said they were a team of riders and horses who demonstrated the weapons and armour of the 15th century.

Their training exercises included practice for jousting which meant riding at speed throwing javelins and practising with swords and lances.

“The horses do love these events and the four we have in this display get quite excited and do enjoy the applause.” 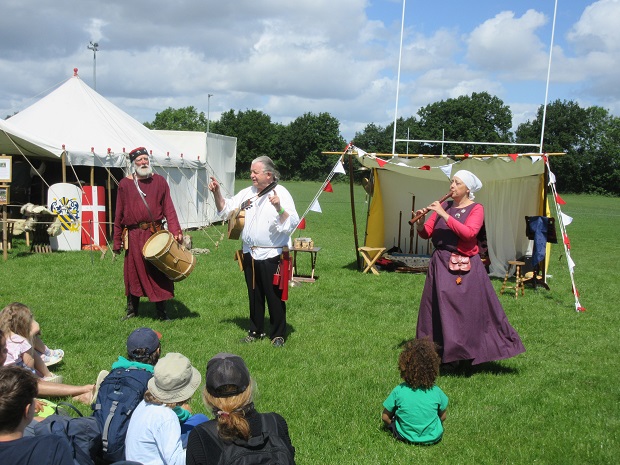 A musical welcome was provided by the group, A Merrie Noyse – Drummer Rod Pomery, Barry Pope, and piper Susan Pope. 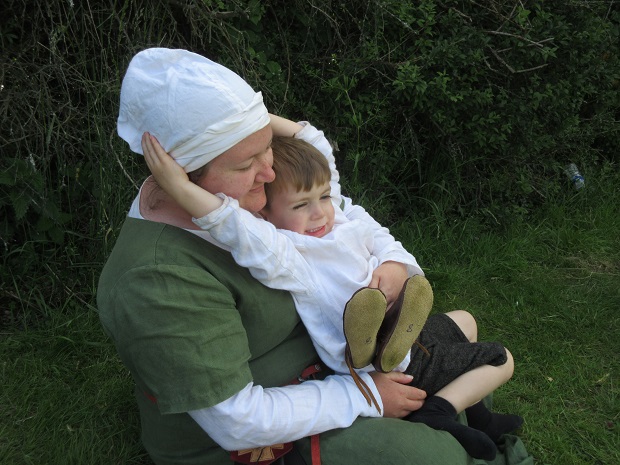 The re-enactments proved a little tiring for James Parker (3) who sat with his mother Alice watching the Battle of Barnet re-enactment. Her husband was a knight with the Lancastrians and James’ grandfather Bob was among the team firing cannons.