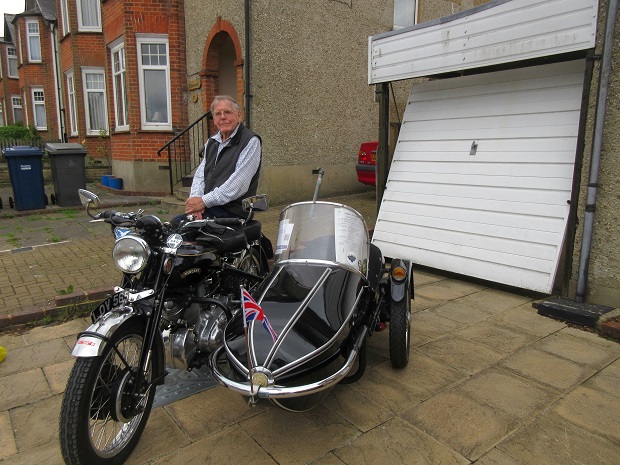 A veteran High Barnet motorcycling enthusiast, 86-year-old Peter Biles -- who bought his first motorbike just before the Coronation in 1953 -- was one of the veterans taking pride of place in the pageant The Times of Our Lives on the final day of the Platinum Jubilee celebrations in Whitehall and The Mall.

A veteran High Barnet motorcycling enthusiast, 86-year-old Peter Biles – who bought his first motorbike just before the Coronation in 1953 – was one of the veterans taking pride of place in the pageant The Times of Our Lives on the final day of the Platinum Jubilee celebrations in Whitehall and The Mall.

His 1952 twin-cylinder Vincent Rapide with its Watsonian sidecar – in which Mr Biles, his wife Veronica and their two children went on many happy family excursions – was one of the classic motorbikes in a parade of 1950s motorcycles.

“I passed my test in 1952 at the age of 16, bought my first motorbike, a 150cc New Imperial, and from then I was King of the Road…so I have been motorcycling as long as the Queen has been on the throne.”

Mr Biles said it was a great privilege to be invited to take part in the Platinum Jubilee Parade after previously having been in the Golden Jubilee celebrations.

“I don’t think there was quite as much noise from the crowd this time when we went past. Ten years ago, the roar was tremendous down The Mall, and when I revved the throttle, I still couldn’t hear the engine.”

Taking part in the Platinum Jubilee parade was a chance to look back to the 1950s – an opportunity that was shared by another long-time High Barnet resident, Andy Benstead who unfurled his 1953 Union Jack when Granville Road held its street party for the Jubilee. 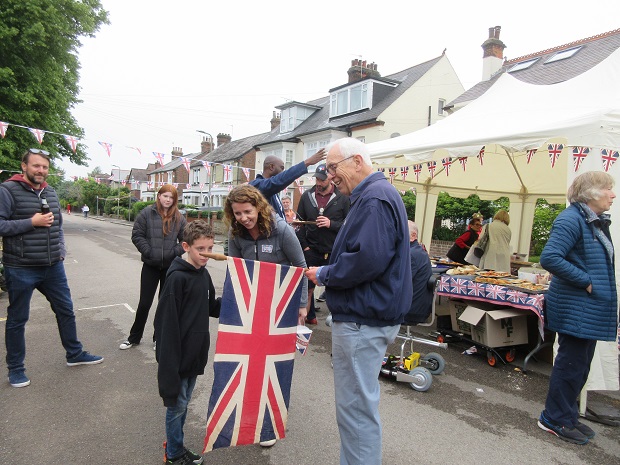 Mr Benstead bought the flag for 1 shilling and 6 pence from Woolworths and remembers waving it outside the house while his parents watched the Coronation on a black and white television set.

“I was 11 and I remember telling my mother I really wanted to have my own flag…and now I keep it safe in the loft for special occasions,” said Mr Benstead, (see above) unfurling his prized memento for Fin Wrench (8) and Becky Dodsworth.

Mr Biles bought his first Vincent in 1958 for £37 and for the last 40 years has owned his much-prized black shadow Vincent Rapide, with its Watsonian grand prix sports side car. 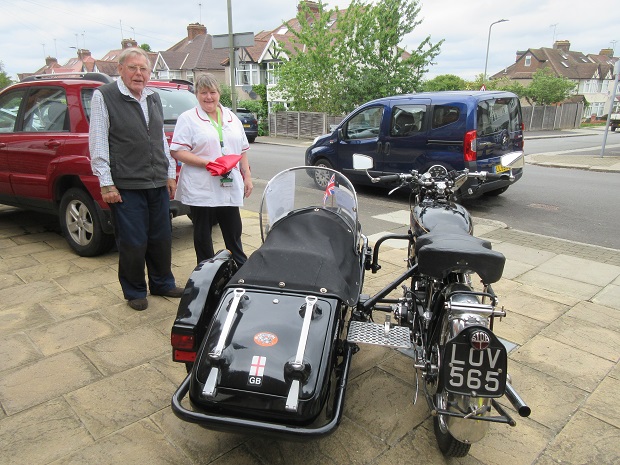 Whenever he wheels the bike into the drive at his home in Byng Road, passers-by stop in admiration – nurse Angela Forbes-Ditchman said she just had to walk over to take a closer look.

Over the years Mr Biles has made several modifications such as adding as a side car.

“Veronica my wife always rode pillion, but we got the side car when our first was born and then when a second child came along, I converted it to a two-seater.

“All four of us would often set off for Manchester to visit my wife’s family. It was a great way of travelling together.”

In more recent years he fitted an electric starter – a modification advised by the surgeon who inserted his two stainless steel hips. “The medics said kick starting a motor bike is not recommended after a hip replacement!”

Mr Biles, his wife and their Vincent were regular visitors to European motorcycle rallies, and especially tours of the Swiss Alps.

“Vincents are widely admired on the continent. They are magnificent machines and for 25 years, until the Japanese bikes came along, they were the fastest standard motorcycle in the world.

“In the late 1950s and 1960s no-one wanted motor bikes. Everyone was going over to mini vans, which then cost less than a motorcycle and side car, so you couldn’t give them away.

“My Vincent Rapide was in typical oily-rag condition when I bought it, but she’s really done well. I must have clocked up 90,000 miles on her myself over the last 40 years.”

Mr Biles is a stalwart supporter of the Barnet Classic Car Club’s annual show and does all he can to encourage owners of vintage motorcycles to join the display.