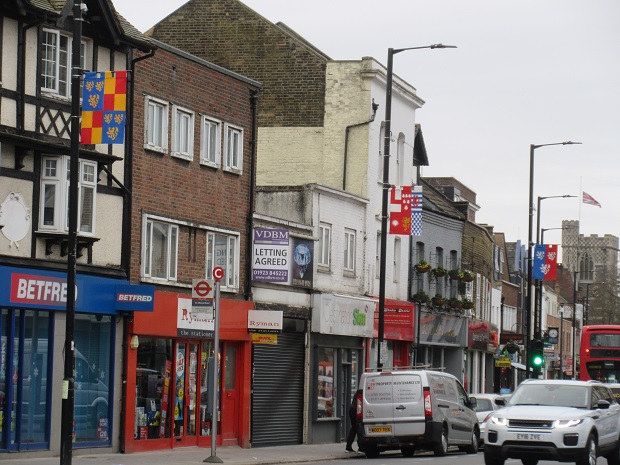 Barnet High Street is once again resplendent with heraldic banners from the Wars of the Roses -- just one of the many ways in which the local community will be celebrating this year's 550th anniversary of the Battle of Barnet.

After their absence last year because of lockdown restrictions imposed by the Covid-19 emergency, conditions are now slightly easier allowing the High Street to be dressed once again with Yorkist and Lancastrian coats of arms.

The banners are all authentic and colourful reproductions which were researched, designed, and painted by volunteers from Barnet Museum who hope their work will bring the High Street to life in the “midst of this miserable period”. 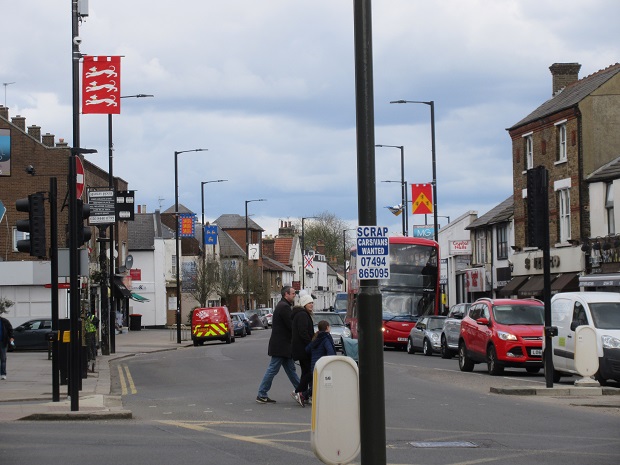 Supporters of the museum and local history society were determined come what may to play their part in ensuring that Chipping Barnet does all it can to celebrate the town’s role in the Wars of the Roses and the important presence of the only registered battlefield in Greater London.

In addition to the 70 for the High Street, another 20 of the hand painted banners are on display in one of the vacant units in the Spires shopping centre – and will be open to public viewing as from the Monday 12 April in line with the lifting of lockdown restrictions. 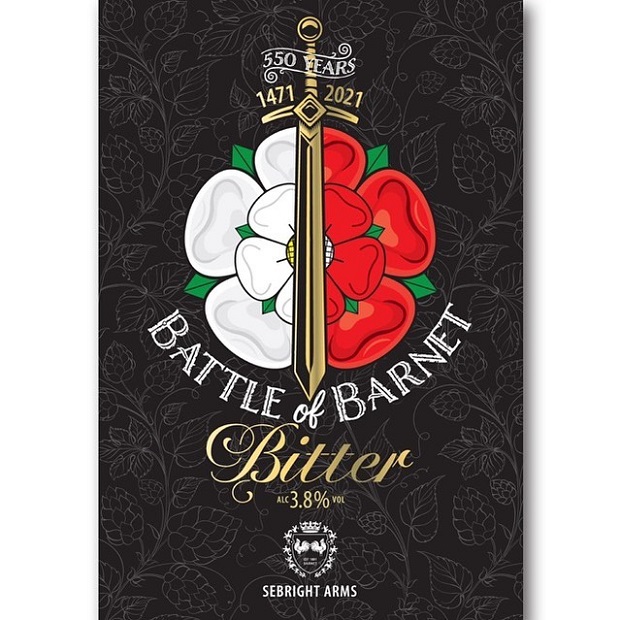 Another timely commemoration – again just beating the battle’s official anniversary date of Wednesday 14 April – will be the launch of a special Battle of Barnet bitter at the Sebright Arms in Alston Road.

Landlord Lukas Szumski says the special beer has been produced in co-operation with the Rivertown Brewery and McMullen & Son of Hertford.

“We are donating 50 pence from every pint of Battle of Barnet bitter to this year’s medieval festival and re-enactments – our way of contributing to what we hope will be a real celebration after months of lockdown.”

All being well, the Barnet Medieval Festival will be the highlight of this year’s commemorative events and a two-day event is planned for the weekend of 11-12 September at the Byng Road playing fields.

There will be re-enactments of both the Battle of Barnet and the Battle of Tewkesbury which were fought in the spring of 1471 and the playing fields, usually the home of Barnet Elizabethans RFC, will be host to a medieval encampment and market.

A crowd funding campaign – see details below – is well underway to help finance what the festival committee hopes will be a truly memorable event attracting hundreds of battlefield re-enactors and their supporters as well as thousands of residents and visitors. 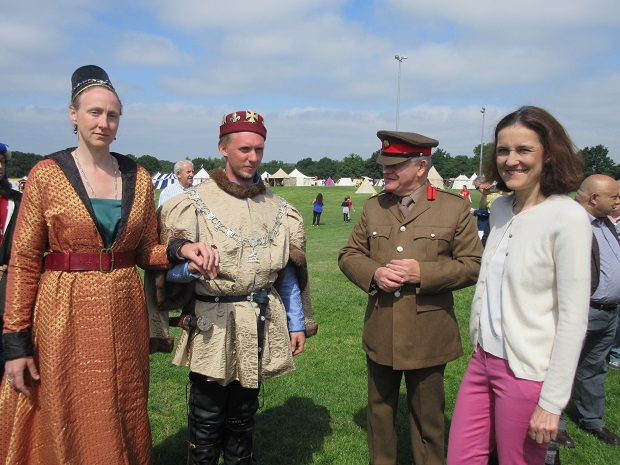 The return of the festival after its absence last year because of the pandemic, was highlighted in a debate at Westminster initiated by the Chipping Barnet MP Theresa Villiers (seen far right with re-enactors and Martin Russell, representative deputy lieutenant for Barnet).

She recalled the launch of the festival in the summer of 2018 when she fired off a replica cannon as part of the opening ceremony.

“It was very, very loud – and it was one of the best days out I have ever had in my constituency. A brilliant way to bring people together.”

Barnet was one of the most decisive battles of the 30-year Wars of the Roses and really could claim to be part of “the real game of thrones”.

“Three kings were on the field that day, the last of a 300-year line of Plantagenet monarchs: first, Edward IV; secondly, his prisoner, the deposed Henry V1; and thirdly, Edward’s brother, Richard, Duke of Gloucester, who would one day seize power and provoke 500 years of debate on his character and alleged crimes.

“The stakes could not have been higher for the men peering through the mist at one another that Easter Sunday morning 550 years ago.”

As many as 4,000 might have lost their lives that day, and the battle was a significant turning point, and probably the first in Britain to see the extensive use of handguns.

Ms Villiers told her fellow MPs that the most important reason to mark the anniversary was to promote Chipping Barnet and to encourage people to visit the town centre.

“This is the only registered battlefield that people can get to by tube; the only one within the Greater London area.”

She acknowledged the ongoing research and debate into whether the battle may have taken place slightly further north, towards the Wrotham Park estate, rather than in the Hadley Green, Old Fold and Hadley Highstone area, which is the registered site.

“However, even if the main centre of the fighting turns out to have been not in my constituency but in that of the MP for Hertsmere, Oliver Dowden, further up the road to Potters Bar, contemporary accounts confirm that fighting extended back towards Barnet, so my constituency is likely to remain the site of at least part of the battlefield, even if these latest theories on location ultimately prove to be correct.

“Once life returns to normal, I warmly encourage people to walk around what is traditionally recognised as the battle site. Hopefully, in doing so, visitors will take time to stop off at some of Barnet’s excellent hospitality businesses, as indeed some of the victorious Yorkist troops apparently did after the battle.”

Anyone wishing to make a donation can do so by visiting https://www.spacehive.com/battle-barnet-550 or e-mailing the festival team at This email address is being protected from spambots. You need JavaScript enabled to view it.

Theresa's excellent speech to Parliament can be read here

together with the reply from the Minister for Digital and Culture, Caroline Dinenage, whose response included:

Theresa's excellent speech to Parliament can be read here

together with the reply from the Minister for Digital and Culture, Caroline Dinenage, whose response included:

"Barnet’s medieval festival is a perfect example of that, and I am sure it will deliver on those aims. It will mark the prestigious anniversary with a special programme of battle re-enactments, gunnery and archery displays, living history encampments, music, dance, a medieval market and children’s activities. I cannot think of a better way to spend an afternoon—I quite fancy having a go at firing a cannon myself, I have to say. Having been delayed by the coronavirus, the festival is now due to take place in September, and I think it will be an absolutely resounding success. It is the sort of event that we have all be desperate for over these past months.

"The Battle of Barnet project, as my right hon. Friend says, serves as a shining example of how, more than half a millennium later, our nation’s history can really be used to enrich the lives of the local community. Running from 2015 to 2019, managed by the Barnet Museum, the Barnet Society and the Battlefields Trust, it sought to improve knowledge and understanding through archaeological surveys of the battlefield, in conjunction with the University of Huddersfield. It is such fascinating work."

I see in your headline picture, the flag on the church is at half mast commemorating the death of another royal, Prince Philip.

Graham
There are no comments posted here yet