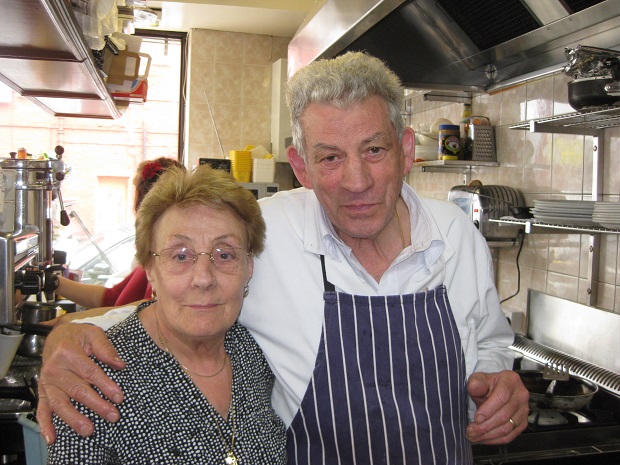 Dorina Cardosi, a welcoming face for so many years behind the counter at Dory's cafe, Barnet, has died at the age of 86.

Seen here with her husband Tony, she had worked at the café since she was a teenager.

As her funeral cortege approached the cafe at the junction of St Albans Road and Bruce Road (on Friday 28 May) a hundred or so customers and friends from shops and businesses in and around Barnet High Street had gathered to say a final farewell and immediately burst into applause. 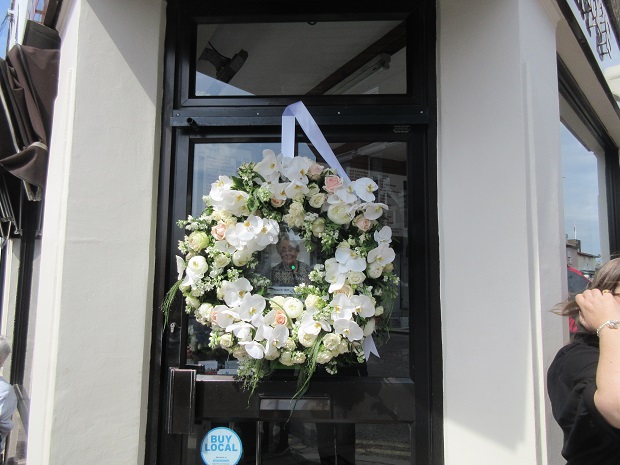 A wreath on the cafe front door was a poignant reminder that few Barnet traders can match the loyalty of Dory’s long-standing clientele who over the years have enjoyed an endless supply of full English breakfasts, home-made dishes, sandwiches, coffee, and tea. 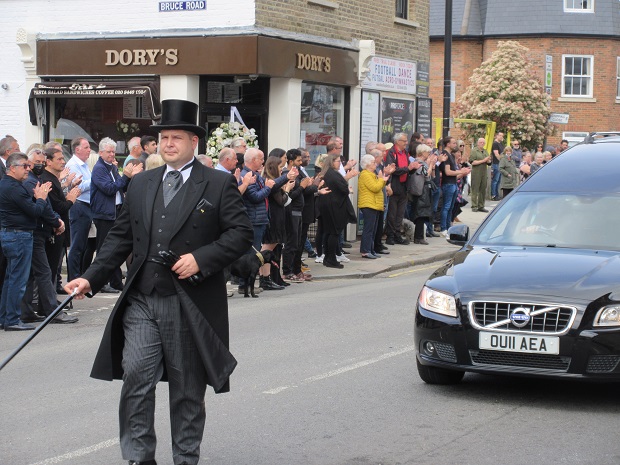 After pausing for a few moments as the applause continued, the cortege finally went slowly down the High Street passing other doorways where former customers and friends stood to say their goodbyes.

Dorina was the daughter of Ottorini Pellicci – whose name had been shortened to Dory – who took over the St Albans Road café from the Mancini family in 1956 when it was next door to what was then the site of Barnet market. 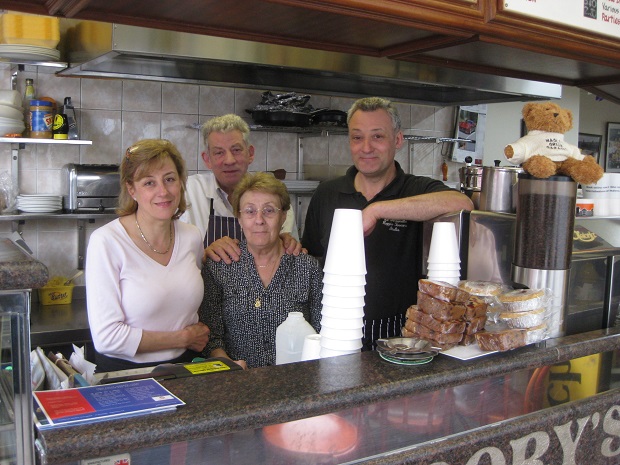 Dory’s café is now in the hands of the third generation of the family, Dorina’s son and daughter, Giuliano Cardosi and Angela Casali (seen in this 2014 photograph) together with her husband Tony, who at the age of 85 still helps at the café.

Angela said her mother worked at the cafe with her father Dory before she married her husband Tony in 1963; later they took over the business.

“Dorina really was quite an institution, very popular with her customers, as well as the matriarch of the family.

“She carried on working well into her 70s and she’s really missed all the cut and thrust and banter of life at the café.

“Sometimes we find ourselves serving a television star or celebrity and mum loved those occasions, and especially when customers remembered her father.” 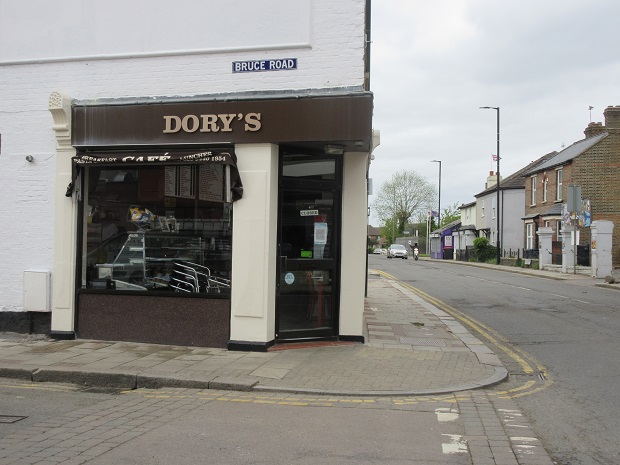 Angela said that she and Giuliano find it so rewarding when loyal customers remind them how long they have been coming to Dory’s.

“My grandfather would be so pleased to think we are maintaining a quality of food and service that can win such satisfaction and loyalty.”

Dory, whose father and mother opened their café – E Pellicci – in Bethnal Green Road in 1900 was one of a family of eight.

The week after he and his wife Crimene opened for business in the St Albans Road café, the cattle market next door closed but the growing popularity of the twice-weekly Barnet stalls market ensured a regular clientele.

“Back in those days there were long queues at the stalls in the market and trade was so good we used to get queues as well outside our door and along the pavement.”

I’m proud to stand in front of you and tell you how I feel,

About a very special lady, petite, but made of steel.

Everyone was her family, she took them in her nest,

With food and love and comfort she really was the best.

She loved a family gathering, a sing song and a dance,

And a crafty little tipple when she could get a chance.

She ran the cafe like clockwork, with a tea towel in her hand,

She’d tell you where to sit down and even where to stand,

Her customers were special, and she watched as they have grown,

And some of them still visit with children of their own,

She knew them all by name, not plain old Johns or Micks,

But roast beef, lots of gravy and sausage, egg and chips,

She knew everyone in Barnet and what they liked to order,

And barked at Tony everyday as he cooked in the corner,

But what a perfect pair they made, and he would often voice,

Look at her, she is my life, I made the perfect choice.

She never beat around the bush and always spoke her mind.

On a family outing whilst sitting in a crowd,

Doreen never held back and often spoke out loud,

“How many are passing out today” said someone from their seat

You were a feisty lady with a twinkle in your eye,

I bet we’ll know which star you are, when looking at the sky.

We know that you will guide us, we’ve learned so much from you

The legacy that you have left to everyone you knew.

So, no matter what you called her, I am sure you’ll all agree,

To every single one of us she was our special Nonna D.

Written with love by Lauren xx

The Newsletter Editor writes:
When we moved to High Barnet in 2006, we chanced upon Dory’s – an Aladdin’s Cave of great home-made Italian food.
Like many others, we made the regular Saturday morning pilgrimage there – sausage and chips for the kids, scrambled eggs for us and a word for everybody from Dorina. Saturdays soon gave way to other days as well.
Dorina bestrode the café like a circus ringmaster, taking orders, serving them, shuffling people around the tables – somehow everyone was fitted in.
Armed with a fresh tea-towel, draped over her shoulder, she occasionally swished it in mock retribution to those customers who teased her. They all loved her, and she loved them.
When the family left every August for a month in their homeland of Tuscany, customers wandered, nomad-like, looking elsewhere for sustenance.
Come September on the family’s return, the fatted calf was killed and the rejoicing began.
It takes a special type of person to command that devotion, and a special type of family to continue it.
Eamonn Rafferty