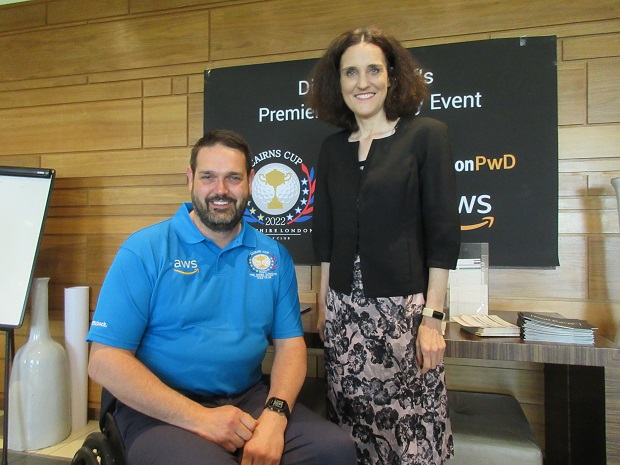 Golfers with disabilities assembled at The Shire golf course in St Albans Road, Barnet, for the launch of the Cairns Cup, a new international disability golf competition between teams from Europe and the USA.

One of the England players in the 16-strong European team is paraplegic Kris Aves, a former Metropolitan Police Officer, who lives at Hadley Highstone.

He invited the Chipping Barnet MP Theresa Villiers to open the tournament – a competition which Ms Villiers said she hoped would widen support for golf as an inclusive sport that can help transform the lives of the disabled.

Mr Aves was left paralysed because of a spinal cord injury he received when hit by the van used in the March 2017 terror attack on Westminster bridge.

Despite being confined to a wheelchair, he was re-introduced to golf by the charity, Golf Trust.

He competes with the help of a paragolfer, an all-terrain golfcart wheelchair which raises disabled golfers to a standing position and allows them to stand securely while playing.

“It’s been an amazing experience to play with Team Europe and welcome American golfers with disabilities here at The Shire for this tournament.” 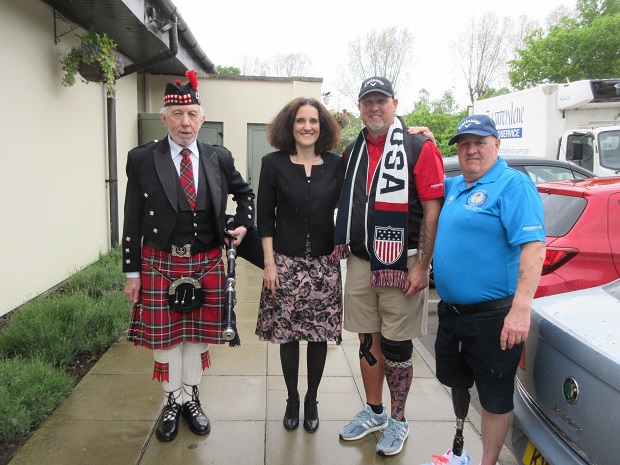 In opening the tournament Ms Villiers – seen here (from left to right) with piper Andrew McGregor, Team USA captain Tracy Ramin and Team Europe member Roger Hurcombe – said she was delighted to have had the chance to support an event that could help encourage the disabled to take part in sports like golf.

She thanked Kris Aves for inviting her and said he was a hugely inspirational figure.

The Cains Cup was established following the sudden death of Billy Cairns who about to compete with the European team against the USA at Rotunda, Florida in 2018.

After the tournament, the two teams decided to organise a biennial disability golf tournament in his memory and compete for the Cairns Cup, which was donated by his family. 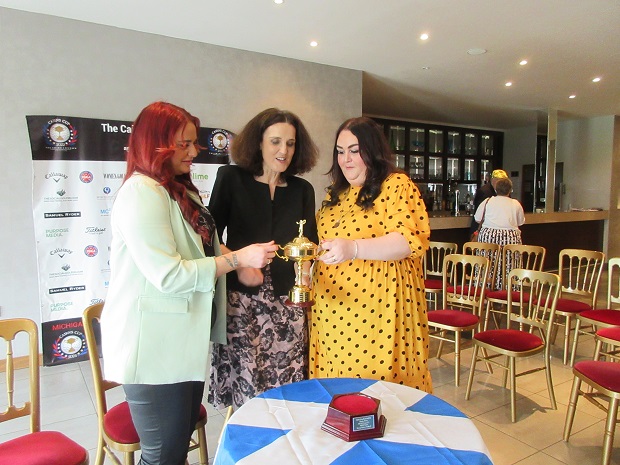 Covid prevented a return tournament which was due to have been held at the Celtic Manor course in Wales in 2020 and a return match had to be postponed until 2022.

Players in Team Europe include golfers from Holland, Germany, and Portugal as well as England and Scotland.

As their captain Kevin Booth pointed out in the tournament programme, they were aptly name the Dads’ Army when they competed in Florida in 2018 because of their high average age and rugged look when up against a much younger USA team. 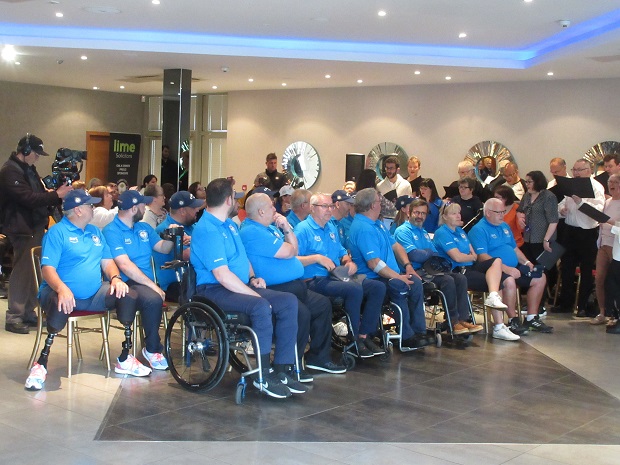 Team Europe – seen here in blue – joined their American counterparts in applauding the The Sing Out Choir, made up of adults with autism, learning disabilities or additional needs, who performed at the opening ceremony.

Among those present at the opening of the tournament was Lindsay Bowman, cultural affairs officer at the US Embassy in London, who said she was delighted to see the new tournament finally being launched, one of the sporting links that strengthened the relationship between the UK and the USA.