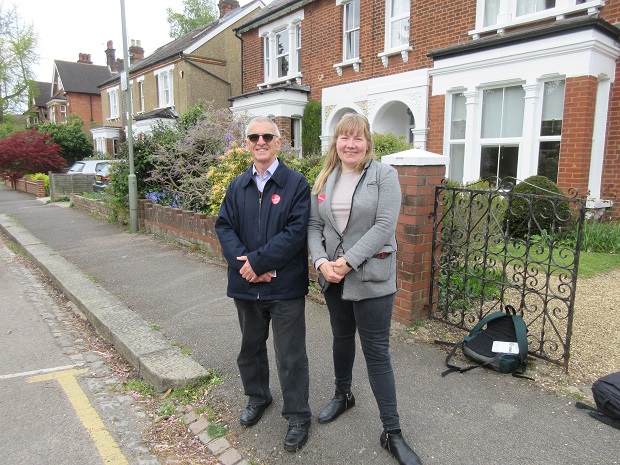 Labour has taken overall control of Barnet Borough Council for the first time since the London boroughs were created in the 1960s -- and High Barnet is one of the former Conservative strongholds that now has two Labour councillors.

Paul Edwards and Emma Whysall – seen above, out canvassing – both had comfortable victories in the redrawn High Barnet ward, previously safely held by the Conservatives.

They join other successful Labour candidates who won seats in the two newly created wards of Barnet Vale and Whetstone.

There was almost a clean sweep for Labour in the six wards closest to High Barnet, which helped the party take a commanding outright majority on the borough council, winning 41 of the 63 seats, with the Conservatives reduced to a mere 22 . (See results below)

David Longstaff, formerly Conservative ward councillor for High Barnet, was re-elected in Barnet Vale, and the Conservatives held their three seats in Totteridge Woodside, but otherwise the local ward map turned from blue to red.

Councillor Barry Rawlings, leader of the Labour group, hailed their victory and their commanding majority of 19, as a boost for party leader Keir Starmer, who last month launched Labour’s campaign for the London boroughs at the Wood Street campus of Barnet and Southgate College – a recognition of Barnet’s importance as a top Labour target.

Ahead of the polls there was considerable uncertainty about the outcome in and around High Barnet because of significant changes in the borough’s ward boundaries. 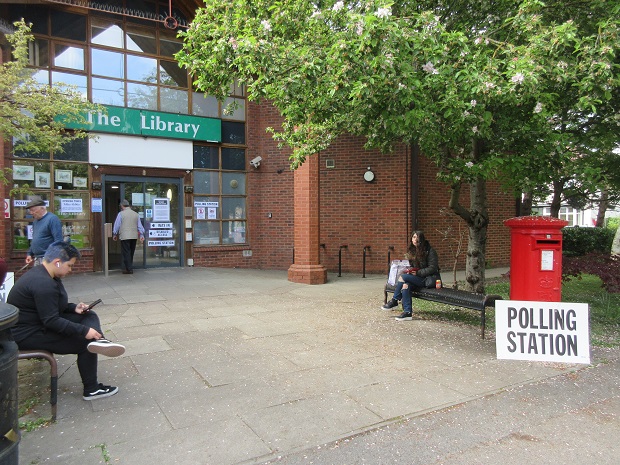 High Barnet was redrawn to include part of Labour-held Underhill but lost an area south of Meadway to the new Barnet Vale ward – and Paul Edwards and Emma Whysall took the two seats with comfortable majorities.

There was a similar clean sweep for Labour in the new Whetstone ward where Ella Rachel Rose and Liron Mark Velleman were elected.

Labour had no difficulty holding Underhill where there were comfortable victories for Zahra Parveen Beg and Tim Roberts.

Barnet Borough Council was in Labour hands for six years with the support of the Liberal Democrats – from 1994 to 2002 Labour – but the Conservatives then regained control and in recent years it was one of the Conservatives’ flagship councils, along with Wandsworth and Westminster, which were also lost to Labour in the May 2022 elections.

The defeated Conservative leader in Barnet, Councillor Daniel Thomas – who was re-elected in Finchley Church End – blamed what he said was the perfect storm of a cost-of-living crisis, 12 years of a Conservative government and redrawn boundaries.

He told the BBC he did not think there had been a huge conversion to Labour. “This is a warning shot from Conservative supporters – a fair number just stayed at home.” 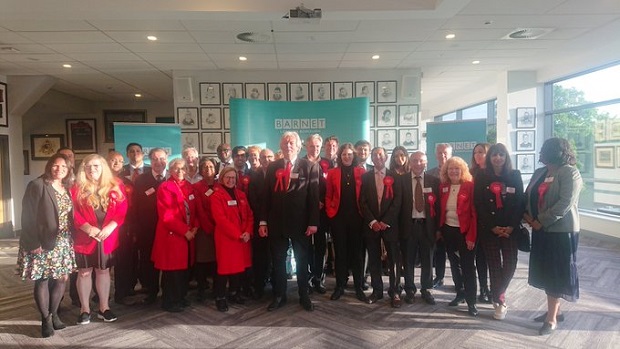 Labour Councillor Barry Rawlings (centre), who was re-elected in Friern Barnet and who now becomes the leader of the council, hailed their victory as a recognition of the strength of Keir Starmer’s leadership after difficult years under Jeremy Corbyn when Labour failed against expectations in 2018 to take control of Barnet.

Under Starmer’s leadership the “stain” of antisemitism had finally been removed in a council area which had a large Jewish community and that had been extremely positive.

His six years as Labour leader in the borough had not always been the “most comfortable” as 15 per cent of the population was Jewish and he estimated that of regular voters, 20 per cent were Jewish.

“It means there are a lot of non-Jewish people who have Jewish friends and so antisemitism was a stain on us. We were a tainted brand.”

During the campaign, Labour promised to work more closely with residents and would return 1 per cent of this year’s council tax while ensuring that any future increases were kept below the maximum amount allowed by the government.

One pledge of considerable local interest is that Labour would oppose tower blocks proposed for nearby London Underground stations, although Councillor Rawlings acknowledged there was a case for some housing development on land around High Barnet tube station.

Another election promise is to reinstate community skips in a bid to reduce fly-tipping. 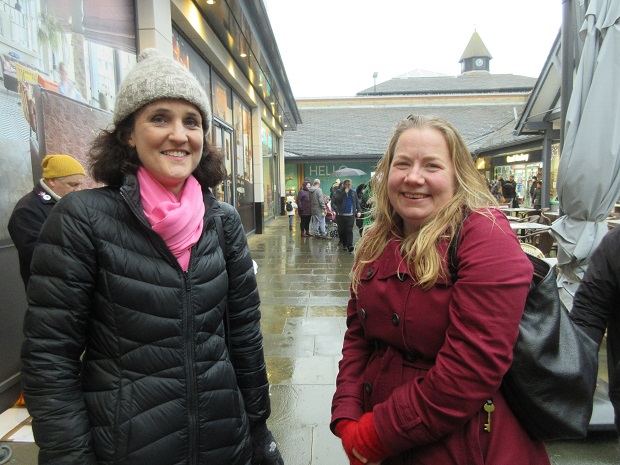 If re-selected, new Labour councillor Emma Whysall (left) intends to stand again as the Labour candidate at the next parliamentary election.

In the run-up to polling day High Barnet became a political hot spot for the first time in living memory once the news media realised that the town might deliver an historic upset for the Conservatives. 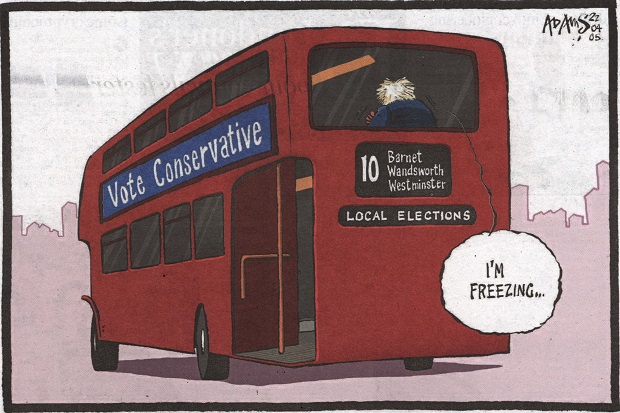 As the election campaign intensified, national newspaper coverage, and broadcast commentaries singled out Barnet as one of the boroughs where Boris Johnson could face a setback -- a prospect that inspired the cartoonist of the London Evening Standard.

In recent general and council elections both the MP Theresa Villiers and High Barnet’s Conservative councillors have been threatened increasingly by an upsurge in the Labour vote.

The prospect that this Tory citadel might be under threat attracted television, radio, and newspaper correspondents anxious to sound out local opinion.

In hotly contested elections, market squares up and down the land are an ideal location for securing vox pops – the soundbites and quotes from local people that the reporters desperately need.

Over the years, stallholders and customers at Barnet Market have rarely been disturbed by media frenzies and the razzmatazz of electioneering, but they rose to the challenge and were ready with some feisty responses about the performance of Boris Johnson and his troubles over Partygate. 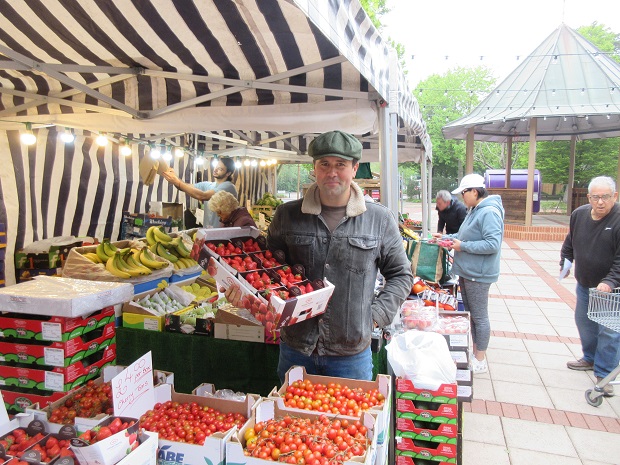 Fruit and vegetable stallholder Tyler Bone did seem somewhat nonplussed when he was asked for his views by Paddy O’Connell, presenter of Radio 4’s Sunday morning programme Broadcasting House.

After the broadcast, Tyler explained that he had been anxious not to upset his regular customers by sounding off about politics.

“I wasn’t going to fall for that,” he said. “I’m here to sell oranges and tomatoes, that’s my fare, not offering my views on Boris Johnson.”

One well-known High Barnet trader who did not mind disclosing his political affiliations to The Times was Julian Stewart (74) who opened his hardware store Julian’s Hardware 43 years ago, and who described himself as a lifelong socialist.

His verdict was that Barnet Borough Council could “finally turn red” but he acknowledged there were unexpected voting shifts as his wife, once a Labour voter, was “driven to the Conservatives at the last election, finding herself unable to vote for a party that hadn’t expelled Ken Livingstone.”

Julian admitted that he had once voted against Labour, when his friend stood for the Monster Raving Loony Party.