The best ever Barnet Christmas Fair 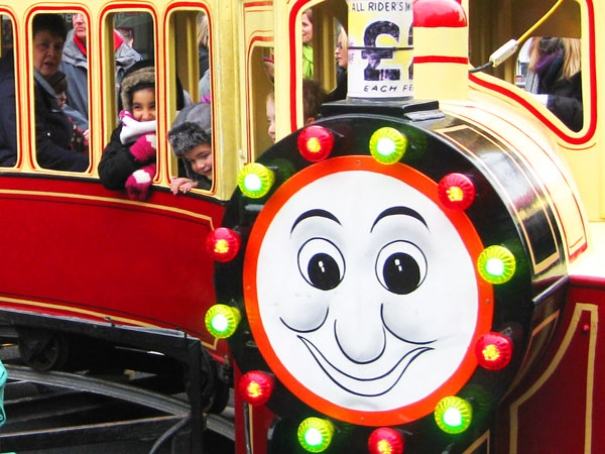 There were festive attractions all the way, from the newly installed Christmas tree at the front of the parish church of St John the Baptist to a multitude of stalls, dancing and other live events, fun-fair rides for children, Father Christmas in the Spires shopping centre and reindeer at the bandstand.

The Mayor of Barnet, Councillor Melvin Cohen, opened the fair at 12 noon on Sunday (1.12.2013) after a procession from St Albans Road led by Star Wars characters and a team of drummers who had performed at the Olympic Games.

To the great credit of the organising committee the proceedings went without a hitch and the general consensus among stall-holders, supporters and members of the public was that High Barnet had shown that with strong support from local voluntary groups a Christmas fair was just the kind of event that could bring the community together.

For once the weather was kind, a dry morning with sunny intervals in the afternoon; by late afternoon the  Christmas illuminations, switched on for the first time the previous evening, helped continue the festive spirit.

The Mayor of Barnet, Councillor Melvin Cohen, opened the fair

Local residents and visitors enjoyed the chance to walk up and down a High Street free of traffic. There was plenty of competition among the line-up of rival attractions and food stalls. A traditional fun-fair near the St Albans Road junction was popular with children, and so was the chance to kick a football at scoring ranges manned by Barnet Football Club.

Music relayed by the loudspeakers of EN5 Radio was rounded by a full peal of Yorkshire Surprise Major by a team of bell ringers at St John the Baptist.

In opening the fair the Mayor was supported by the Barnet festival queen Candy Fern and the festival princess Sophia Theocharous. He congratulated the organisers for arranging a packed programme of events.

“We need to support our local high streets and this is a wonderful way to support the community and our local traders."

Councillor Cohen paid tribute to the six-year campaign to save Barnet Market which he said was at last back on its original site; level surfacing for the stalls and new fencing had transformed its appearance and he wished the market every success.

Friends of Barnet Market were one of the many local groups with a well-supported stall; members handed out leaflets promoting the various traders.

At the Barnet Society stall committee members sold copies of the second part of the local guide Rambles Round Barnet, which has just been published and which is now on sale at Barnet Museum, Waterstones in the Spires and the Paper Shop in the High Street.

Another group vying for attention was Barnet Football Club Supporters Trust, which is running the Back 2 Barnet campaign.  Its aim is to persuade the club’s owner to reconsider the move to the Hive at Edgware and return to the stadium at Underhill.

Oliver Deed, one of the trust’s organisers, said the fair had been a valuable opportunity to explain why “the Bees belong in Barnet.”  Barnet FC was founded in 1888 and had played at Underhill since 1907; its last match in the town was in April 2013.

“We agree the club’s new ground at the Hive is a good facility but we want the Bees back in Barnet; they are our local football club and this is where they belong.”

Barnet Christmas Fair is arranged by Barnet Arts.  This year’s bucket collection was for Sense, which supports families in Barnet affected by deafblindness, and Penniwells riding school at Edgwarebury Lane, Elstree, which provides riding for the disabled.

More in this category: « Town centre to be transformed And the band played on... »