Telling the time once again 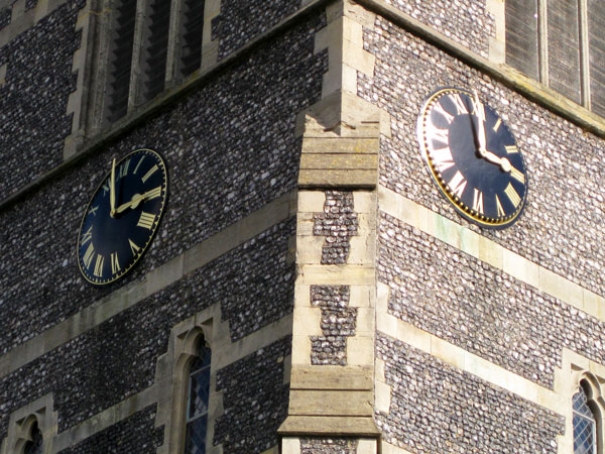 The new gold leaf on the Roman numerals shining bright in the autumn sunshine
Barnet church has its clock back at last! For almost a month High Barnet residents looked in vain when needing to check the time, but the tower of the town’s famous landmark is resplendent once more.

The three clock faces of the Parish Church of St John the Baptist – facing north, south and west – have been repainted and regilded and were finally reinstalled after a delay caused by the stormy weather of early October. 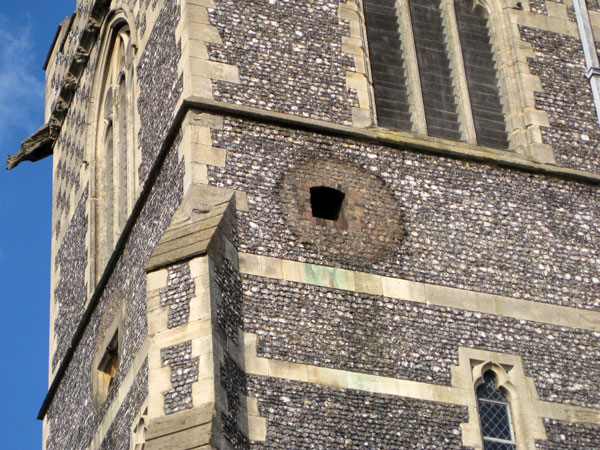 Gold leaf was used to regild the Roman numerals on the three copper dials once they had been repainted black.

Pedestrians in High Street, Church Passage and Wood Street watched in awe as  clockmaker Terry Hill, with a rope and a pulley attached to the top of the tower, winched himself up and down and refitted each of the three dials.

His colleague clockmaker Peter Lane was on watch below. He said it had been too windy for some time but finally the weather had calmed down enough to enable them to carry out the installation.

“The twenty-three-and-a-half carat English gold leaf on each of the numerals and the minute marks is the best you can get for a clock like this.

The three dials should now look great for easily the next twenty-five years, and probably much longer.” 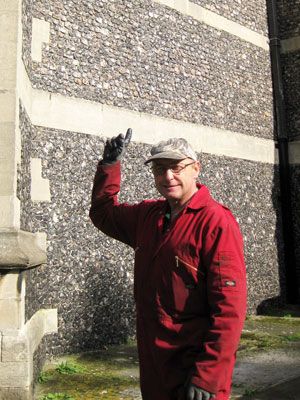 The removal of the dials for repainting had exposed a small but rarely seen window on the west face of the tower. Its reappearance puzzled passers-by.

There are small holes on the north and south faces for the two original clock faces but the west face dial wasn’t installed until much later.

Terry Hill said he thought the last time the dials were removed for regilding was provably up to forty years ago and they were in quite a state; the numerals and paint were faded.

“It was quite a tricky job because the two original dials on the north and south face are very heavy because the copper is a double thickness. The west dial is lighter.

“When it came to re-installing the clock faces the hardest job is to get the 12-to-6 plumb line precisely vertical and that takes time. It is quite an old fixing and the height didn’t help, but the three dials are now in excellent shape.”

The gold leaf used on the three dials doesn’t come cheap: the cost depends on fluctuations in the gold price but there would not have been much change from £1,000.

More in this category: « Rare flowers from Totteridge Work starts at last at Byng Road’s eco-centre »