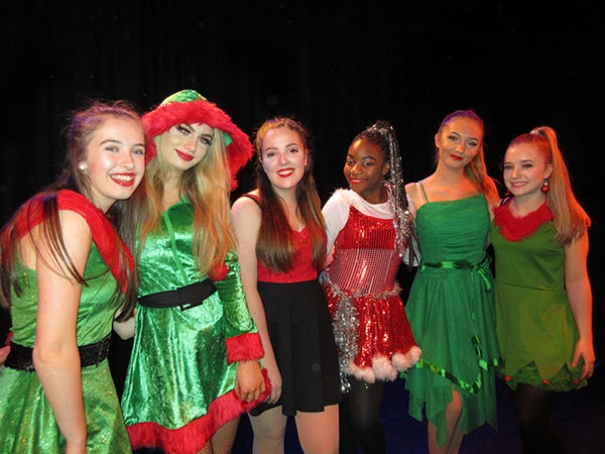 Elves take a break from their rehearsal for Twas The Night Before Christmas (from left to right): Clementine Griffiths, Lois-Grace Atkins, Holly Strawson, Miriam Nyarko, Tallulah Isted, and Erin Gall.
Preparations are well underway for the annual Barnet Christmas Fayre on Sunday 3 December – including elves rehearsing their dance routines for their production, Twas the Night Before Christmas, to be staged at the Bull Theatre.

A packed day of events is planned, starting in St Albans Road with a procession formed by a marching band and circus performers which will head for the dance space in the High Street ready for the official opening by the Mayor of Barnet, Councillor Brian Salinger.

Circus is the theme of the fayre – in line with the circus theme for the Lord Mayor of London’s New Year Parade.

Barnet Boys’ Brigade and Girls’ Association’s marching band will lead the parade, followed pupils from Suzi Earnshaw Theatre School and the Mayor and Mayoress in a vintage car.

In addition to the children’s funfair and stalls the length of the High Street, there will be a Christmas courtyard in front of Barnet College offering entertainment, stalls and refreshments; a craft market in Church House; and a Christmas bazar in Wesley Hall.

At the Bull Theatre, there will be three performances by the Suzi Earnshaw Theatre School of Twas The Night Before Christmas.

A full musical programme is on offer at the parish church, including performances by the jazz ensemble and senior concert band of the East Barnet Music Centre; the Finchley Music Centre and Barnet Youth Strings Orchestra; and recitals by Gemma Kateb (piano), Gavin Stewart (flute) and Stephen Tatlow (organ).

Other musical events include a brass band and choirs in the Spires and live music at the Butcher’s Arms.

To round off the fayre, the bell ringers at the parish church will be attempting to ring a Peal of Double Norwich Court Major, starting at 3pm – a feat that requires non-stop ringing for over three hours.

This year’s fayre is in support of the Mayor’s charity, Homeless Action in Barnet.

The High Street and stretches of some adjoining roads will be closed between 8am and 7pm on Sunday and there will be free parking except in the Spires shopping centre car park.