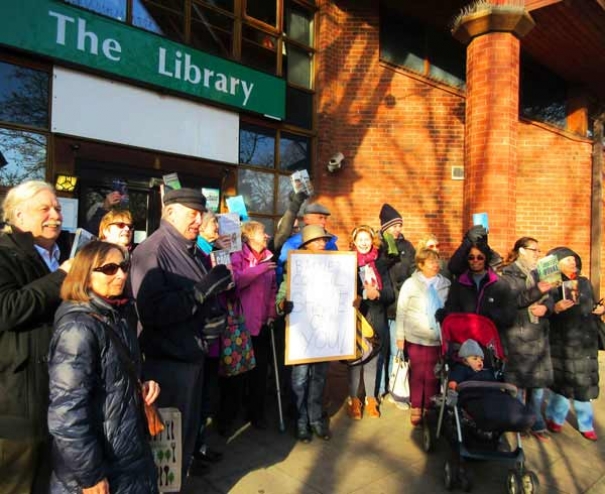 The read in at Chipping Barnet library in the hope of changing the Councils decision to remove this facility
Outraged Barnet book lovers staged a mass read-in outside the closed front doors of Chipping Barnet Library to demonstrate their dismay and anger at the downgrading of a much-loved community asset.

The library is being closed for two months – from Monday 5 December to Monday 6 February – so that it can be prepared for self-service operation, ready for much of the building to be converted into commercial office space.

“Barnet Council: Shame on You!” read the placard carried by Byng Road resident Dick Elms. After the read-in he left his poster propped up against the doors as a forlorn, but visual reminder of the strength of the protest.

Residents have until Thursday 15 December to register objections on Barnet Council’s website to a planning application for permission for a change of use to library floor space, plus several exterior alterations to the building.

The Barnet Society believes that the loss of library floor space provides ample grounds for objections because under planning law the loss of community space is only “acceptable in exceptional circumstances” – and the Society contends that test has not been met.

If there were mass objections, the Society believes there might still be a chance to prevent the loss of 116 square metres of library space and the insertion of a new mezzanine floor to create lettable office space for up to 28 employees – the council’s justification being that a rentable income will help sustain the library service.

...there is no demand for continued community or education use

The residents at the read-in were united in their opposition to the downsizing of the library and the introduction of largely self-service operation.

They believed there was no possible justification for renting out office space in a library building that had been only recently been constructed for the benefit of High Barnet.

“There is no earthly reason why the council should be reducing library floor space to let out rooms to commercial tenants when there is plenty of vacant office space above shops all along the High Street,” said Nick Saul, former editor of the Barnet Local Advertiser.

“Yet again High Barnet is losing its community facilities when there is a crying need for civic amenities.”

Dick and Jane Elms, who arrived with their “Shame on You” placard, said they had both spent a life time in education and were appalled that the council had ignored local objections.

“We’re paying the price for Barnet’s six-year freeze on council tax, when we know many residents would be happy to pay more.”

Jane Elms said the loss of library space and switch to self-service operation would have the greatest effect on less well-off children.

What’s so upsetting is that the council doesn’t even seem to care that there are so many children whose parents can’t afford to buy books, and where their homes lack internet access and space to work on computers.

“Outrageous, outrageous” repeated Phyllis Oberman, a Barnet resident for the last 11 years, who said she couldn’t understand how local councillors were prepared to agree to such “a terrible thing” as reducing library space in order to rent out space for offices.

“I’m an inveterate book buyer, and I like owning books, but many parents can’t afford to do that for their children. I have always loved coming to the Chipping Barnet Library, seeing the students using computers, and people reading the papers. How can our local council put all that in jeopardy?”

Much to the delight of the protestors, the Barnet Press photographer Anne-Marie Sanderson, was on hand to choreograph the  read in for a group photo.

The next steps in the Barnet Society’s campaign to try to force Barnet Council to think again:

The council justifies the loss of 116 square metres of library floor space on the grounds that “there is no demand for continued community or education use” – an assertion that the Society believes cannot be justified and provides a legitimate reason for an objection.

The council finally conceded on Thursday 24 November that it lacked the necessary planning permission for the library’s change of use, yet the council had already announced that the library would be closed to the public as from Monday 5 December, and it is not due to re-open, in a reduced capacity, until Monday 6 February 2017.