Millie to live on in bronze 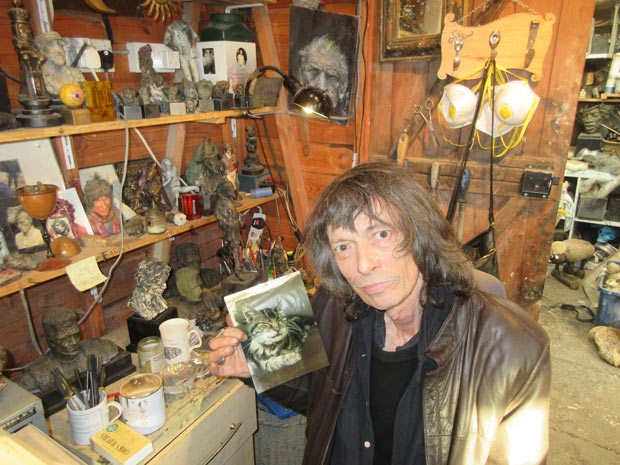 John Somerville in his Wood Street studio
Barnet sculptor John Somerville, who has captured the image of countless rock stars and writers, is facing what he says is a daunting challenge.

He has been commissioned to reproduce the likeness of Millie the Waitrose cat whose death in late January sparked a wave of online tributes to High Barnet’s feline celebrity.

In response to appeals for a memorial to Millie to be erected in the Spires shopping centre, her owner, Paula Gabb, launched an online appeal which in two weeks has already raised over £2,000 towards the cost of a bronze sculpture.

This is Mr Somerville’s first commission for a cat – and she will be the latest in a long line of celebrities whose busts and statues have emerged from his studio in Wood Street, Barnet.

One of his best-known works on display locally is that of Spike Milligan sitting on a bench in the gardens of Avenue House, Finchley.

Another local celebrity captured in bronze is that of the late Humphrey Littleton.

Mr Somerville has a catalogue full of busts and statues of rock stars, including John Lennon, Mick Jagger, Keith Richard, David Bowie and Ronnie Wood, on show at the Hard Rock Museum in Los Angeles – and also currently at the Arcade in North Finchley.

Mr Somerville says the challenge he faces with Millie is to work out the best pose so as to capture her likeness.

“I used to see Millie myself outside Waitrose, so I know she was a real character.

“Often, she would sit there with her paw raised, almost as if greeting passers-by, and that would be a very appealing image. I have got to capture that likeness, so that everyone will recognise her straight away.”

To help him in his work he plans to study photos and YouTube videos of Millie and study books examining cat behaviour.

“I am only now beginning to realise the difference there is between different cat faces. I really have a lot to learn about feline characteristics.”

Initially Mr Somerville will make a small wax model, followed by a worked-up life-size clay model and then he will decide with Ms Gabb how it should be cast in bronze.  Ideally the statue would be placed on a small stone stand.

He is also currently working on an eight-foot version of Phyrric Victory, his statue commemorating the Battle of Barnet – “a monument to the futility of war and especially the Wars of Roses where Warwick the Kingmaker plotted and perished on the fields of Barnet”.

So far 189 people have contributed to the appeal which has raised £2,200