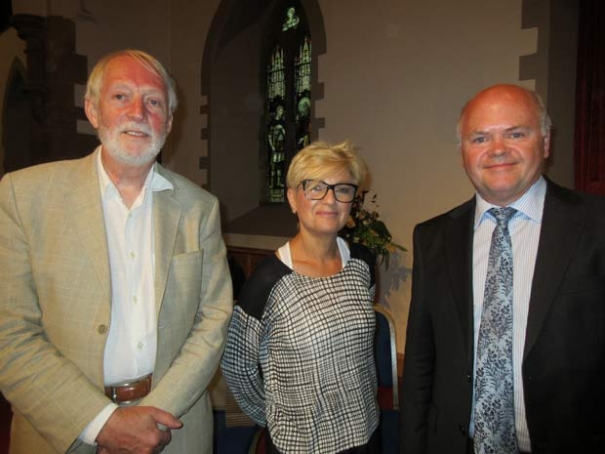 Council David Longstaff (far right), guest speaker at the Barnet Society’s annual general meeting, was welcomed by the chair, Robin Bishop (left) and the vice-chair Gail Laser
Charging £3,000 to hang heraldic banners from 26 lamp standards in Barnet High Street was condemned as the latest example of the dysfunctional relationship between Barnet Council and its web of private contractors providing out-sourced services.

The coats of arms, all hand painted by volunteers, were finally installed four days before the first-ever Barnet Medieval Festival – a fortnight later than planned.

Equally annoying for the Battle of Barnet Project team was the tortuous delay in securing the licence needed to stage the festival on the Byng Road playing fields. In the end, it was issued with only a week to spare.

Councillor David Longstaff, re-elected in May as one of High Barnet three Conservative councillors, told the Barnet Society’s annual meeting (14.6.2018) that the festival organisers had been treated “appallingly” by Barnet Council and its contractors. 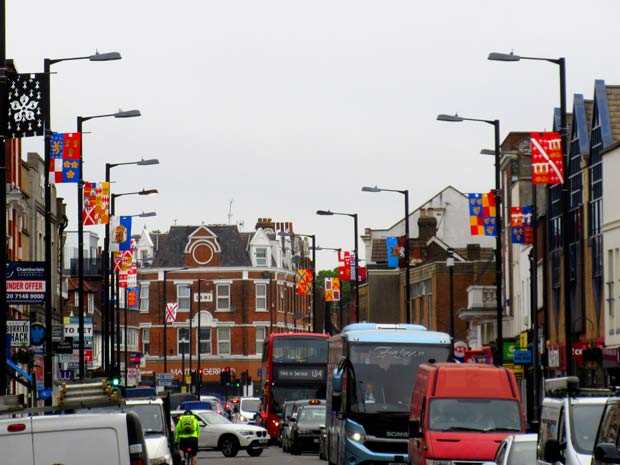 “Personally, I was blown away by the size of the medieval festival and sight of the Battle of Barnet re-enactments.

The festival organisers should not have gone through a trauma like this.

“There is a requirement in Barnet Council’s contract with Capita that contractors must assist in the promotion of local town centre initiatives and I will find out what happened,” said Councillor Longstaff, when replying to complaints outlined by the society’s vice chair, Gail Laser, organiser of Love Barnet.

The banners were installed by Bouygues, a contractor responsible for the lamp standards, working alongside Re, which is a partnership between Capita and Barnet Council, and which is responsible for road maintenance.

“Too many people at different contractors were involved in taking decisions about hanging the banners, and then they were installed far to high, so everyone gets a neck ache just looking at them,” said Councillor Longstaff.

“This was an appalling way to treat the festival organisers. They did everything correctly. We won’t let this happen again,” said Councillor Longstaff, who is chair of the Barnet Town Team and a former Mayor of Barnet.

In response to further questions about the lack of clarity in Barnet Council’s relationship with Capita, he acknowledged that “certain issues” about the delivery of services were having to be thrashed out. He would not divulge what the issues were but insisted the contract would continue.

“We are making phenomenal savings in some areas with Capita, but less so in other areas...and discussions are ongoing to make sure we get the best possible value.”

In contrast to the difficulties experienced by the medieval festival, Councillor Longstaff said the Town Team’s initiative in launching the Barnet Teenage Market had gone smoothly and had been a great success.

More in this category: « Battle of Barnet re-enactment – a weekend to remember Press-ups helping worthy causes »