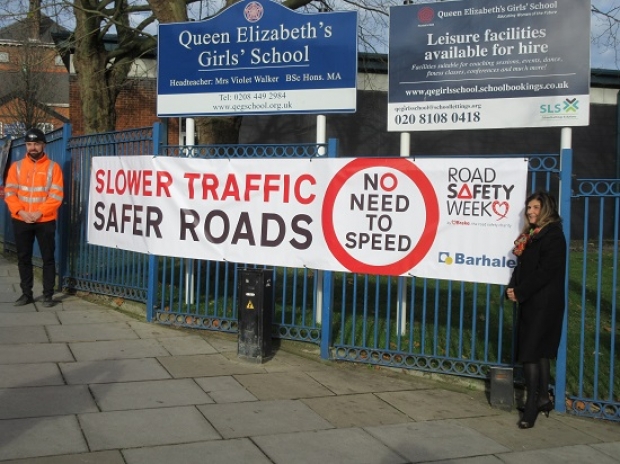 Headteacher Violet Walker urged parents and motorists to do more to ensure the safety of the school’s 1,100 pupils by avoiding unsafe parking and reducing the speed of cars and lorries.
“Our position at the top of Barnet Hill, so close to the tube station and bus stops, has always posed a safety risk,” said Mrs Walker.
“Regrettably, some families do not honour the parking restrictions, blocking vision, creating a hazard for other vehicles and putting students at risk.”
Her initiative was welcomed by residents of nearby roads who have complained regularly about parents’ cars being parked on double yellow lines, blocking entrances – a complaint echoed on the other side of High Barnet by residents around Queen Elizabeth’s School (formerly QE Boys) who have also been protesting for years about dangerous traffic conditions.

Unlike QE Girls, which attracts pupils from its surrounding catchment area, many of whom walk to school, Queen Elizabeth’s grammar school for boys takes pupils from across north and north west London.
They arrive and depart in a fleet of coaches and private hire vehicles with many family cars adding to the congestion.
A 20-mph speed limit was introduced in Queens Road to improve safety but there are regular complaints about lack of enforcement. 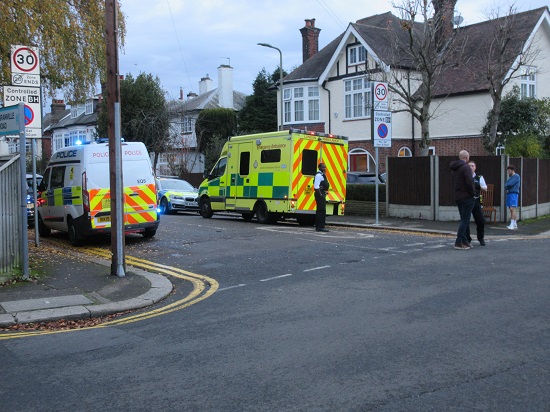 After a road accident early in November when a car containing QE boys was involved in a collision with an elderly resident crossing Queens Road, residents in Queens Road and Granville Road wrote again to the Chipping Barnet MP, Theresa Villiers, and High Barnet councillor, David Longstaff, demanding better enforcement of parking restrictions.
The road safety banner outside QE Girls was supplied by the charity Brake Road Safety which is supported by construction contractors Barhale who are installing a new five-kilometre long water main between Cockfosters Road and High Barnet. 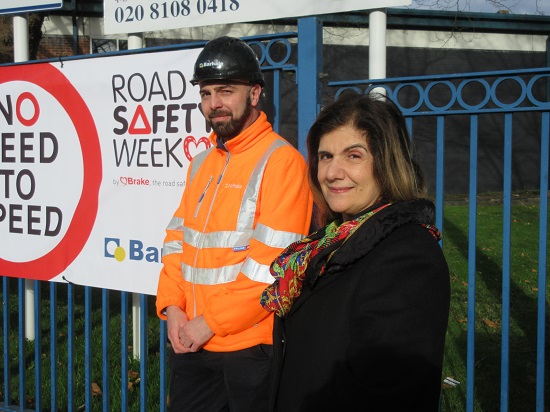 In her appeal to parents at the unveiling of the banner, Mrs Walker said unlawful parking around QE Girls sometimes blocked the entrance to the school car park preventing contracted cleaners arriving and leaving for work on time.
She urged Barnet Council’s Highways Services team to be more proactive and to give greater support to the under-resourced Barnet school safety officers.

One change that she thinks would improve road safety would be the rephasing of the traffic light system at the junction of Barnet Hill and Meadway to favour pedestrians during the times pupils are arriving or leaving the school.
“This would support pedestrians who share the pavements with our students at these very busy times, particularly as the school start coincides with the morning rush hour.”

Congestion around Queen Elizabeth’s School is at its worst during the annual entrance test days in September when 800 boys attend each day over a four-day period and when Queen’s Road is partially closed except for access.
In its annual letter to nearby residents, the school says parents are reminded to park further away, using car parks such as the Spires, and complete journeys on foot.
The school says it liaises with the safer neighbourhood team of Barnet police and says parents should report cases of illegal parking.
Barnet Council is asked to ensure the deployment of its civil enforcement officers to take action against parking infringements.

Barhale construction was anxious to support QE Girls’ road safety initiative in recognition of the disruption that might be caused next year when a new water main to High Barnet is being laid across the school playing fields.
The new main, from the water tower on Cockfosters Road, will run up Beech Hill and Camlet Way, across Hadley Common, King George’s Field, QE Girls’ playing field and on up Park Road to connect to the trunk water main in Barnet High Street.
Work on the new main is due to start in Park Road in late November; the link across Hadley Common will be installed in January, so as not to disturb great crested newts in a nearby pond; and the work across King George’s Field and the school playing field will be left until April in the hope of drier conditions.