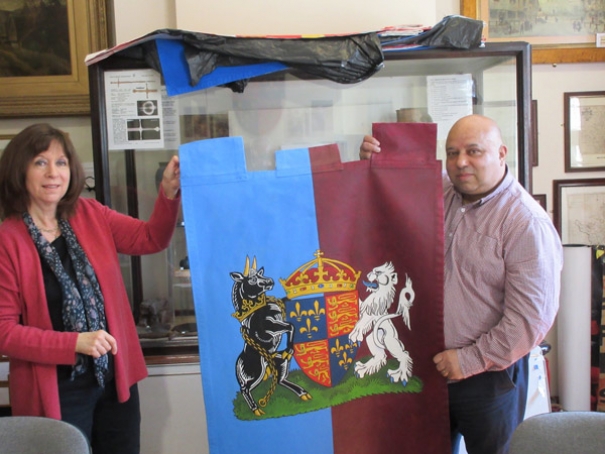 Hilary Harrison, a member of the Battle of Barnet project team, and Barnet Museum trustee Michael Noronha, with the newly-painted Henry VI banner
The coat of arms of Henry VI is the latest to be painted as part of the Battle of Barnet Project – and it is one of 30 heraldic banners that it is hoped will be hung along the High Street to celebrate Barnet’s role in the Wars of the Roses.

So far 26 banners have been completed and the aim is to have as many as possible hung from lamp posts and shop fronts along the High Street to coincide with the Barnet Medieval Festival to be held over the weekend of Saturday and Sunday, June 9 and 10.

Re-enactments of scenes from the battles of St Albans (1461) and Barnet (1471) will be the highlight of the festival, which is to be held at the Byng Road playing fields.

The coat of arms of Henry VI was painted by Geoffrey Wheeler, the medieval artist and photographer, who has amassed a large collection of photographs, drawings and illustrations featuring the dukes, barons and noblemen who fought at Barnet.

Many of the newly-painted banners will be on display for the first in the Waitrose hall at the Spires shopping centre on Saturday 12 May, at a What’s on Exhibition organised by Barnet Borough Arts Council.

Another display will feature John Somerville’s sculpture of the Battle of Barnet, “Pyrrhic Victory”.

Volunteers at Barnet Museum have been working for weeks painting the heraldic banners of the various dukes, earls and noblemen who took part in the battle in the hope of equalling the famous display of over 100 banners along the main streets of Tewkesbury.

Celebrations are organised every year to mark the anniversary of the Battle of Tewkesbury which was fought on 4 May 1471, almost a month after the Battle of Barnet on 14 April 1471.

Mike Noronha, Barnet Museum trustee, says Tewkesbury, as well as other Wars of the Roses battle areas such as Bosworth and Leicester have successfully exploited their heritage, and tourist and academic interest has followed.

Barnet played a part in England’s history.
Let us be aware of it.  Let us be proud of it.

“Edward IV, Henry VI and (the future) Richard III were at the Battle of Barnet, so was the powerful Earl of Warwick, the Kingmaker.

“Barnet is the site of the Battle of Three Kings and the Kingmaker.  Barnet played a part in England’s history. Let us be aware of it; let us be proud of it.”

More in this category: « Busy start for Barnet’s teenage market Spires to host press ups endurance event »
back to top