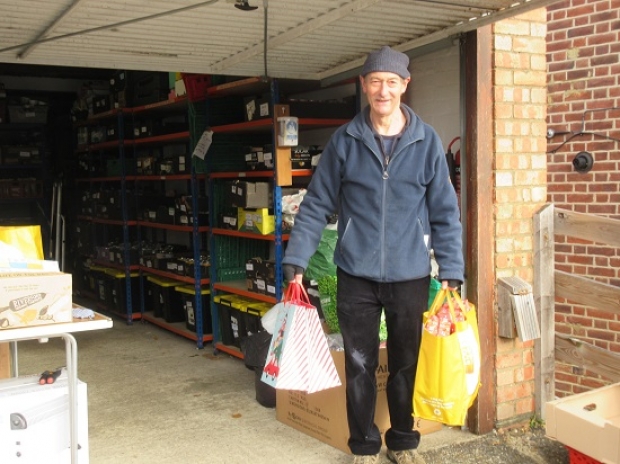 Harold Williams manages the storage of items for Chipping Barnet Food Bank
Increased unemployment and rising hardship due to covid-19 are putting pressure on food banks across the country: 15 new food banks have opened across the London Borough of Barnet since the start of the pandemic.

To cope with the increased demand for groceries and vegetables a food hub has been established in the former East Barnet Library in Brookhill Road where bulk supplies can be dropped off and stored before being re-distributed to new volunteer foodbanks.

Chipping Barnet Food Bank – which takes items donated by shoppers at local supermarkets such as Waitrose, Sainsburys and Morrisons – is also gearing up for a busier than usual Christmas and New Year holiday with an urgent appeal for extra tins of meat and fish.
Harold Williams, who manages the food warehouse for the foodbank – which is open on Tuesdays and Saturdays at St Peter’s Roman Catholic Church, Somerset Road, New Barnet – praised the generosity of people in and around High Barnet.

“Everyone has responded so well with donations of dried food and toiletries, as well as extras for Christmas.
“What we do want more of are some of the tinned foods, such as tins of salmon, sliced ham, chicken breasts, beef, tinned peaches and other fruit, as well as toiletries such as deodorants,” said Mr Williams. 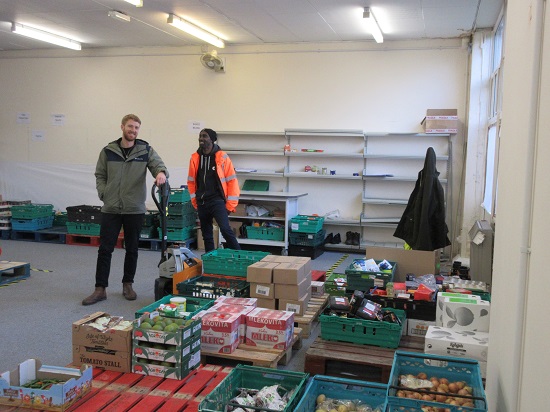 A mile away from the Chipping Barnet Foodbank, supplies are arriving at the newly opened food hub established in the vacant East Barnet Library. It is being managed jointly by Oliver Scott (left) and Lloyd Roper of the Young Barnet Foundation.
“We now have funding for the hub for the next 12 months and we are ready to receive bulk donations from shops of other suppliers, especially perishable items which might be reaching their expiry dates or best before dates,” said Mr Scott.
“These items are all desperately needed by families and others who are without enough to live on. No food should go to waste.
“We are hoping to be a vital part of the supply chain especially for the 15 new food banks which have opened up across the Borough of Barnet since the start of lockdown.
“We now have the logistics in place to receive surplus food in bulk, fresh and perishable items as well as the regular staples, and we can ensure it is distributed to where demand is greatest.”

Mr Scott thought the need for a hub to centralise the collection of bulk donations was essential to assist the new wave of independent food banks.
Well-established food banks such as Chipping Barnet operate within the Trussell Trust, a charity which supports a network of over 1,200 food banks across the country.
They provide a minimum of three days’ supplies in return for food vouchers issued by local agencies such as Citizen’s Advice, children’s centres, health visitors, doctors, and others.

Despite the success of the Trussell Trust’s food banks, community organisations fear that many needy people fall outside these formal structures and this has led to the formation of independent food banks which do not require vouchers and say they help everyone on a basis of “trust and dignity”.
Helen Harte, head of development at Community Barnet, stressed the importance of independent food banks including those at St Barnabas Church, North Finchley, at Finchley Central, East Barnet and Colindale.
“These independent foodbanks are vital for those people who fall through the cracks, perhaps because they have difficulty being processed through the system.
“Others are perhaps waiting for vouchers, or perhaps cannot take advantage because some of the established foodbanks only operate within restricted opening times.”
Ms Harte said that St Barnabas, which assists upwards of 500 people a week, has launched an appeal to raise £1,000 for a freezer to supply turkeys at Christmas. ( https://www.gofundme.com/f/food-bank-christmas-fundraiser )

Another food bank where no appointment is necessary has been held regularly for some years each Friday morning (11am to 1pm) at Christ Church, St Albans Road, High Barnet ( https://ccbarnet.org.uk/foodbank ). Helpers are coping with a surge in demand due to more people being out of work and short of money.

Donations of food and other items can be left on Thursdays (between 10am and 12 noon) and regular updates of shortages are posted on Christ Church's Facebook page. 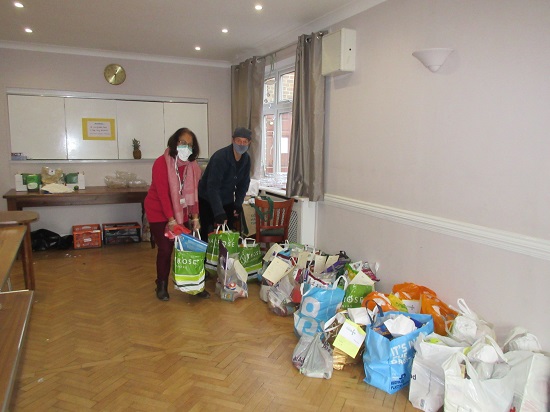 Volunteers at Chipping Barnet Foodbank have https://chippingbarnet.foodbank.org.uk/ had a pre-Christmas rush at their twice-weekly opening times (Tuesdays 12pm to 2pm and Saturdays 10am to 12 noon) but were delighted to be able to offer seasonal items as well as their regular supplies of dried food, tins, and other groceries packed into carrier bags, all waiting to be collected. 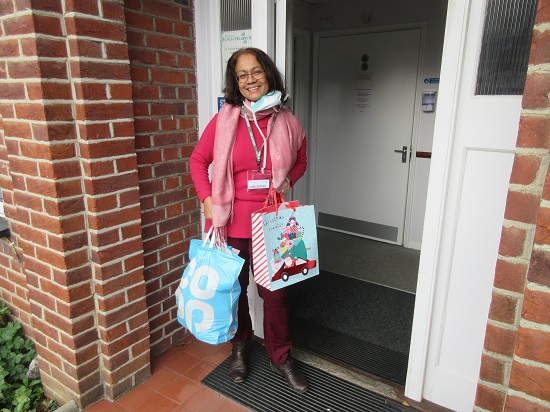 Lucy Rahman, who has been assisting at the food bank since 2015 also volunteers at the food bank at St Mary’s Church, East Finchley, and she has experience of the two systems under which the food banks operate.
“At Chipping Barnet a voucher is needed to get supplies, but we are flexible and obviously help anyone in distress.
“Only today we had a young mother who was obviously very distressed and kept going to the back of the queue, too embarrassed to come in.
“I went out and comforted her and assured her there was no embarrassment in accepting food donated by local people.
“At St Mary’s in East Finchley there is no need for a referral, or a voucher and we help anyone. But both food banks have to be sensible. If someone is trying it on, we do have to challenge them.”

Ms Rahman, who is a retired IT lecturer, goes the extra mile: she has set up her own food bank in her own name on Facebook and allocates £50 a week from her pension to provide food for people too embarrassed even to approach a food bank.
“Some people want to be invisible. They don’t want to be seen queuing up. They fear they might be informed upon or lose their children.
“I say to them, ‘no questions asked, I will drop off some food for you’. It’s my ‘drop and go’ solution. No-one knows it has even happened. I then encourage them to apply for a voucher or to go to one of the independent food banks.
“I probably get more out helping than those I help because I have my health and my pension and people are so grateful when we can help them.”

Jane Cattell, another of the Chipping Barnet volunteers, was pleased with the success of another innovation this year. As well as dried and tinned food, the food bank offered fresh items donated by Marks and Spencer, Costco and other others. 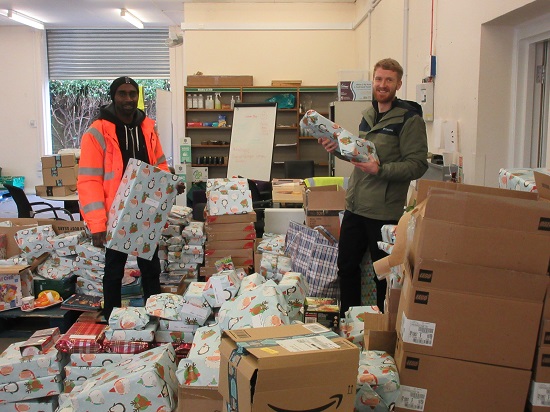 East Barnet Library has an added pre-Christmas role as it is the dropping off point for people who wish to donate Christmas presents for vulnerable children across the borough.
Heaps of donated parcels are piling up in one corner of the building.
Presents can either be purchased from an Amazon Wish List or donated unwrapped to the community support hub at the library at 85 Brookhill Road East Barnet, Monday to Friday, 9am to 5pm.
For more details: www.youngbarnetfoundation.org.uk/christmascampaign