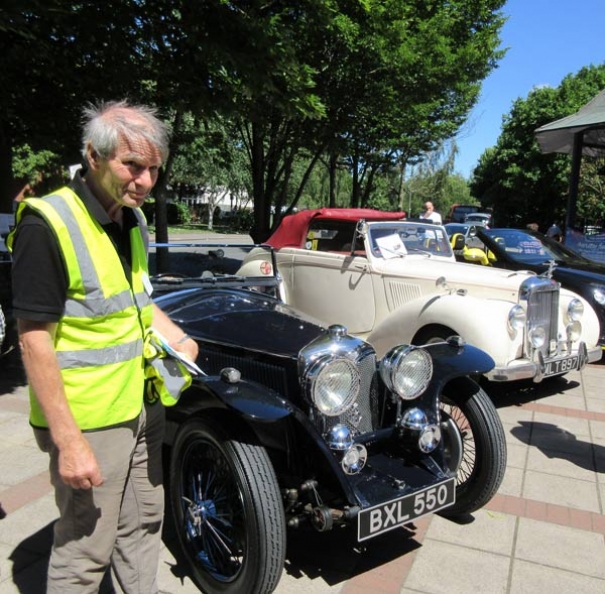 Chris Nightingale beside the 1935 blue Riley sports car that was refused access to the Spires shopping centre. Next to them is a 1951 Grey Lady Alvis
Barnet High Street was lined with well-wishers cheering on the 30 classic cars that made their way to the market and bandstand to take part in the fourth annual show held by the Barnet Classic Car Club.

Bright sunshine brought out the crowds, and after waving to pedestrians and shoppers as the they processed up Barnet Hill and then passed the Spires shopping centre, it was doors open and bonnets up so that enthusiasts could take a peep inside.

Chris Nightingale, the show’s organiser, thanked club members for presenting a display and classic and vintage cars and motorcycles that drew a steady stream of admirers, often standing two to three deep with non-stop questions for car owners and drivers.

The only setback for the show (10.6.2017) was that at the last minute the Spires security staff refused admission for two cars that the club had hoped to put on display in the inner court yards of the shopping centre. 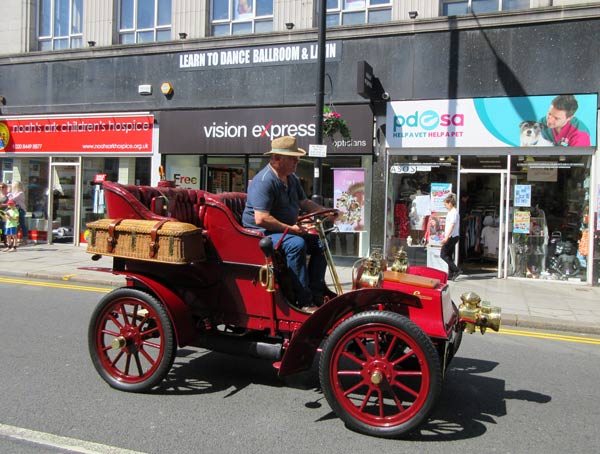 Classic car show on the High StreetThe two cars – Paul and Pina Griffin’s 1923 Bentley and Chris Martin’s 1935 Blue Riley sports car – arrived at the Waitrose entrance, but access was blocked, much to the anger of Mr Nightingale.

“To say I am disgusted with the Spires is putting it mildly. I spent two weeks completing the paper work, completing three risk assessments, and we were assured by the management we that we complied with every requirement.

“But when the cars arrived, security said there is ‘no paper work, so no cars’, and we were forced to keep the two cars at the bandstand.”

Mr Nightingale, a founder member of Friends of Barnet Market, arranged for the Classic Car Club to stage the annual show as a way of maintaining support for the market and attracting shoppers to Barnet.

“Thanks to the weather it has been a huge success and has brought crowds of people to the market. Our aim this year was to include the Spires and that was why we wanted two classic cars on display inside.

“Our aim is to encourage shoppers in the Spires to walk through the bandstand to see more cars, and then go on to the market for an even bigger display, and for the same flow of people to happen in reverse.

“So, you can understand why we are hopping mad that the Spires refused access at the very last minute.”

Published in General News
More in this category: « Barnet's first medieval festival Manorside's Great Get Together »