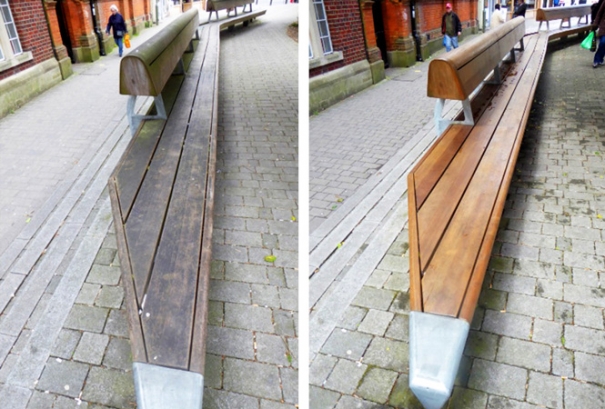 The bench before and after
“The boys dun good” was the general consensus of passers-by as three High Barnet seniors spent 16 man hours giving the Church Passage bench a much-needed wash and brush-up.

Indeed, on finding the long, architecturally-designed teak bench is now looking as good as new after two coats of teak oil, local residents are suggesting there should be a similar task force to remove graffiti from buildings along the High Street.

After scrubbing and washing down the bench, and then applying teak oil, the three volunteers were in agreement that Church Passage deserved a mention in the Guinness books of records for having what might well be the longest, single-span bench in the UK.

The clean-up and re-oiling was an initiative launched by Derek Epstein of the Barnet Society with the support of Barnet Residents Association.

The two organisations say they will share the cost of the teak oil -- £50.76 – unless Barnet Council can be shamed into picking up the bill, especially as community action has saved on labour charges.

Mr Epstein said he was delighted that so many passers-by had appreciated his initiative in cleaning and restoring the bench.

It did present a pretty horrible spectacle, covered in grime and green algae, and looked quite uncared for.

We had to use considerable elbow grease to sand off graffiti from the bench, and remove the many lumps of discarded chewing gum.

“We shall see how the bench weathers this summer and winter and then decide whether to renew the exercise next spring.”

The bench, paid for by the Mayor of London’s outer London fund, was installed in 2011 in a bid to improve the appearance of what had become a rather neglected, but much used passageway between the High Street and Wood Street.

Stop Press: Barnet Council might meet the cost – Councillor David Longstaff says an application should be made to the Council’s Chipping Barnet Area Committee which can make grants to “promote the economic, social or environmental wellbeing of an area”.

More in this category: « Barnet still a cut above Still no news on major fashion store for Spires »