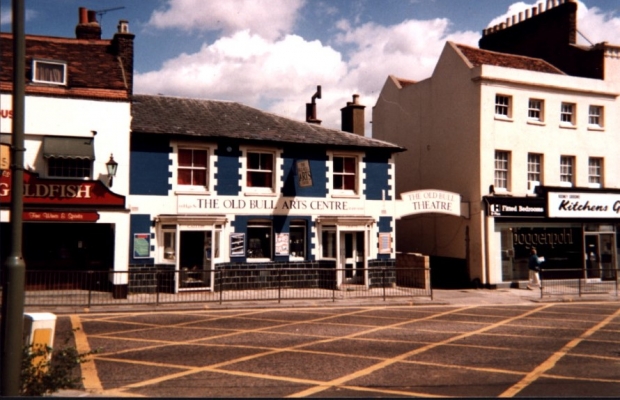 The Bull Theatre -- now the Susi Earnshaw Theatre School -- in its glory days as the Old Bull Arts Centre
There could hardly be a more opportune moment for a determined push to host new productions and attractions at the Bull Theatre in the hope they might appeal to audiences in High Barnet and widen public support. In view of the nationwide theatre shutdown imposed by the coronavirus crisis, numerous events will have to be rescheduled and organisers are being reminded that there is an ideal town centre location available for hire.

This is the 45th anniversary of the original opening of the Old Bull public house as a craft fair and gallery -- the first step on a long and tortuous struggle that culminated in 1988 with the opening of a newly-built 180 seat theatre.

On weekdays and in term time the Bull is currently the home of the Susi Earnshaw Theatre School, but the main theatre is underused in the evenings and at weekends and Ms Earnshaw, the artistic director, is anxious to hear what kind of shows and events would be popular and attract support.

Each Christmas and New Year the Bull's annual pantomime has proved a great attraction with around 30 well-attended performances.

Love and War, the first show staged by the recently formed Bull Players was a sell-out last year.

Several events were lined up for the spring, but they have all had to be cancelled as part of the coronavirus lockdown and Ms Earnshaw is hoping to secure many more new bookings once the restrictions on public gatherings have been lifted.

In the meantime, while the shutdown continues, she is appealing to local residents to visit the Bull's website and indicate the kind of acts and performances they would like to attend.

"Please tell us what sort of event you would come to see. Is it more tribute acts and bands, dance and drama, or possibly book signings? Do let us know on www.thebulltheatre.com

"We are also licensed as a cinema, so perhaps art films could appeal. Children's films on Saturday or Sunday morning might be popular with families."

The two events that had to be cancelled were a musical revue, Love Changes Everything on 27 March and a performance by the reggae ska band, The Silencerz on Saturday 30 May.

Improvements last year in the layout of the auditorium -- now seating 148 -- included the installation of rows or red plush seats with thicker cushions, together with wider aisles.

They have made a visit to the Bull a much more enjoyable and comfortable experience.

Ms Earnshaw's theatre school -- for 9 to 16-year-olds -- took over the lease of the Bull in 2004 when Barnet Council switched the focus of its theatrical and artistic endeavours to the newly opened Artsdepot in North Finchley.

Promoted at the time as Barnet Council's "multi-functional arts facility" -- with a 400-seat theare -- the Artsdepot was predicted to become the Barbican of North London.

The decision to construct and fund the Artsdepot was a tribute to the success of theatrical and musical productions at the Bull, which had become a popular, go-to venue for many North London events.

Inevitably there was concern at the time that High Barnet was about to lose its only arts centre and a Save the Bull group was launched with the backing of supporters of Barnet Borough Arts Council.

When the Susi Earnshaw Theatre School was assigned a lease by Barnet Council there was a sense of relief that High Barnet would continue to have a venue for budding actors and actresses.

In the 16 years the school has been at the Bull, Ms Earnshaw has seen a succession of her former pupils gain national recognition. They include:

Aimie Atkinson in the lead role in Pretty Woman: The Musical which gained four-star reviews at the Piccadilly Theatre.

Miriam Nyarko as Lisa James in the Royal Shakespeare Company's production of The Boy in the Dress.

Alexia Khadine has had lead roles in West End musicals.

And the late singer-songwriter Amy Winehouse.

Enrolment has just opened for new pupils for the 2020-2021 academic year -- posters are up in the town promoting the school.

Published in Events
More in this category: « Battle of Barnet: beaten by coronavirus