Last month the Barnet Society launched an email consultation of its members about the current planning application to build 652 flats in the Victoria Quarter. 100% of our respondents so far are opposed to it.

This would be the biggest development in the environs of Chipping Barnet for over half a century. It would provide substantially more homes than in all the converted office blocks in Station Road, and more than twice as many as Transport for London’s proposed High Barnet Station development.

We accept the principles of redevelopment of brownfield land and higher density near transport hubs, where appropriate. We would welcome more housing in the area, especially more family – and genuinely affordable – homes with gardens. We supported the previously approved scheme for the Victoria Quarter, which was for 371 homes. This current proposal, however, is a massive overdevelopment of the site and is not a design of quality.

The Society considered it sufficiently important to consult as widely as possible among our membership. Approximately 10% replied – a good response rate for a survey of this kind. Every one of them opposed the scheme. We welcome further responses from our members by the deadline of Wednesday 10th June. The more of you who reply, the stronger our collective voice. 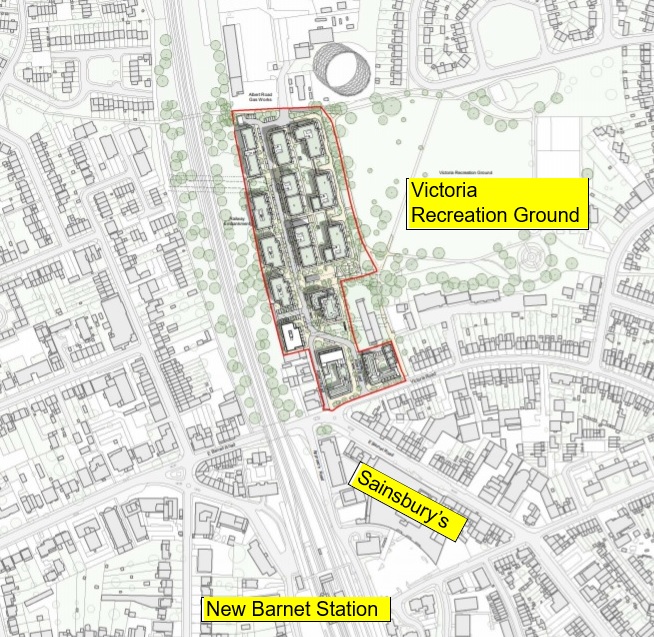 Our reasons for objecting to the planning application are as follows:

• Over-development - The developers plan to build 652 flats, 281 (76%) more than the 371 already agreed. This means that they will build bigger and taller blocks, increase the proportion of smaller units, and fail to provide any homes with gardens.
• Bulk and density - 14 blocks of between 4 and 10 storeys are proposed. Such a dense and high-rise cluster will give an inner-city feel out of keeping with the edge of London location. Given that the Green Belt is 450m away, this will make the edge of New Barnet like a fortress rather than a predominantly low-rise and permeable fringe.
• Height - Four of the blocks exceed Barnet’s policy for tall buildings. Tall blocks so close together are likely to exacerbate windy conditions, especially for pedestrians and cyclists. The development will appear dominant from Victoria Recreation Ground and cannot be fully screened as it will be taller than the mature trees at the edge of the park.
• Character - This scheme is an urban formula applied to a suburban site, not a response to context or local character. Because of its poor connectivity to existing streets to east, north and west, the estate will be in effect a large cul-de-sac, discouraging neighbours from passing through it and thereby reducing informal surveillance and sense of security.
• Type of homes - 81% of the homes proposed are 1-2 bedroom flats, not the 3-4 bedroom homes which are needed locally, as clearly identified in Barnet’s planning policy. Less than a third of them (209) are described as affordable. Given the preponderance of social and low/middle income housing, long-term management will be a serious issue if the development is not to deteriorate like some post-war estates.
• Parking - 392 parking spaces are proposed, an unnecessarily large number for a site so close to a railway station. There is no plan to limit car-ownership by tenure and so there will be increased demand on the very limited supply of unrestricted parking nearby. Only 4 car club spaces will be provided.
• Traffic - The substantial increase in residents and car-use will put additional pressure on an already strained network of streets. In particular, the mini-roundabout at the main exit of the site is already operating over capacity. Vehicle circulation in the site will be poor because of the effective dead-end of the main route.
• Cycling - Storage is inconveniently located at the northern end of the site. Cyclists should be given greater priority along Albert Road West and at the Victoria Road junction. The welcome proposal to improve access to the railway subway should recognise the differing needs of cyclists, pedestrians and the disabled.
• Impact on local services - 652 dwellings will put greater pressure on local medical and dental practices and other services, yet all that is provided for the community is a kiosk.
• Views - In addition to dominating Victoria Recreation Ground, the development will be visible from East Barnet Road, Victoria Road, Park Road, the Bevan Estate and from across the railway line, especially from Tudor Park (none of which are shown in the developers’ visualisations).
• Outdoor space - The development falls a long way short (by 40%) of the required amount of private outdoor amenity space and has to make up for it by creating communal space and relying on the existing amenity space provided by Victoria Recreation Ground. Nothing could demonstrate the necessity for private outdoor space more than the present lockdown for COVID-19.

You still have an opportunity to register your own comments: public consultation is open until Wednesday 17th June 2020. The planning application reference is 20/1719/FUL, and you can find it here: https://publicaccess.barnet.gov.uk/online-applications/applicationDetails.do?activeTab=documents&keyVal=Q8CYSGJI0I700
Scroll to the bottom to view the documents; the Design and Access Statement (in 4 parts) gives an overview.

Save New Barnet and Barnet Cycling Campaign have also submitted comments on the scheme which can be viewed here: http://www.newbarnet.org.uk/ and here:
https://barnetlcc.org/2020/05/12/victoria-quarter-development-in-new-barnet/